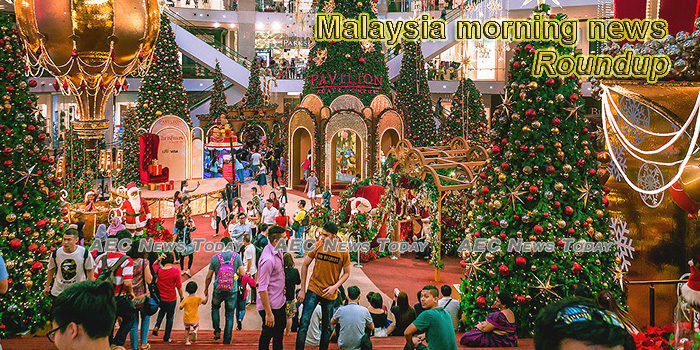 Govt optimistic of achieving 4.8% GDP growth in 2020
The Finance Ministry (MoF) is optimistic that the government will achieve the gross domestic product (GDP) growth target of 4.8% for 2020 despite the challenging global economic environment.
— The Sun Daily

How electoral reform will change Malaysia politics
The victory of the Pakatan Harapan coalition in last year’s Malaysian general elections which saw the first-ever change of government via an electoral process raised widespread expectations for long-suppressed reform.
— AEC News Today

Penang govt to ensure development benefits people: CM
The Penang government remains committed to delivering substantial benefits to the people through the development of the state.
— The Sun Daily

Malaysia can play mediator in Uighur matter, says PPBM Youth
The PPBM youth wing has called on the government to mediate in China’s alleged persecution against Uighur Muslims.
— FMT

Water supply in affected areas nearly fully restored: Air Selangor
Water supply has been almost fully restored to 98.4% of areas in Petaling, Hulu Langat, Sepang, and Kuala Langat as at 6am after an odour pollution incident in Sungai Semenyih.
— The Sun Daily

Lee: Upgrading works at Sg Tujoh CIQ almost complete
Immigration and Customs departments are asked to work closely with Public Works Department (JKR) to ensure that all works at the Customs, Immigration and Quarantine (CIQ) complex at Sungai Tujoh in Kuala Baram are carried out smoothly.
— The Borneo Post

Education Ministry denies ‘Islamisation’, says missionary club in schools only for Muslims
The Ministry of Education has denied today any attempt at Islamisation, after a leaked letter on its cooperation with Putrajaya-linked missionary foundation Yayasan Dakwah Islamiah Malaysia (Yadim) for a club, among others.
— Malay Mail

Water supply restored in 56.9% of affected areas at noon
The restoration of water supply to areas in Petaling, Hulu Langat, Sepang and Putrajaya affected by odour pollution in Sungai Semenyih has reached 56.9% as of noon today.
— The Sun Daily

Under fire, Public Service Dept defends review of critical allowance
The Public Service Department (PSD) has said the Critical Service Incentive Payment (BIPK) allowance for civil servants is reviewed every five years, so as to determine whether it ought to be granted.
— Malay Mail

DOE inspects 37 factories over closure of Semenyih Water Treatment Plant
A total of 37 factories in Selangor were inspected in an integrated odour operation to investigate the cause of closure of the Semenyih water treatment plant and 28 premises were found to be in compliance with the Environmental Quality Act 1974, according to the Department of Environment (DOE).
— The Sun Daily

A perfect crosswind landing for aviation sector in 2019
The year saw the country’s aviation sector square up to a string of challenges such as overcapacity in the region, rising cost, air-safety rating downgrade, airport system malfunction coupled with slower economic growth and volatile foreign exchange rate.
— The Sun Daily

Promise of high pay leads unsuspecting victims to confinement, forced labour, prostitution
They are promised employment with high pay but in reality they are being confined and lured into forced labour and prostitution.
— The Sun Daily

STAR promises independence referendum
State Reform Party (STAR) said its candidates will stand in the 12th state election and if they win, the first thing is to propose a Sarawak Independence Referendum Ordinance in the State Legislative Assembly (DUN).
— New Sarawak Tribune

‘Important to shift talks towards mandatory ESG reporting’
It is crucial to shift the conversation from voluntary to mandatory Environmental, Social and Governance (ESG) reporting, the research arm of Kenanga Investment Bank Bhd (Kenanga Research) said in its view on ESG scoring.
— The Borneo Post

Minimum wage: Ministry dismisses complaints as unfair
The Human Resource Ministry has dismissed complaints of several quarters that the minumum wage hike proposal would only benefit low wage earners in selected cities as unfair to their counterparts in rural areas.
— The Borneo Post

PAS against streamlining of minimum wage
The Pakatan Harapan (PH) government’s wish to streamline the minimum wage to RM1,200 in 57 major cities and municipalities in Malaysia, including seven in Sarawak, has been labelled as not in line with a stable fiscal policy.
— The Borneo Post

Retired cops urge govt to enact clear laws to ban spread of communist ideology
The Retired Senior Police Officers Association of Malaysia, (Respa) has called on the government to immediately enact clear laws and regulations to ban any movement with elements of communism.
— The Sun Daily

Cops urged to act after preacher says Malaysia under communist rule
DAP’s Lim Kit Siang warns authorities to act against the ‘ustaz’ and another speaker who threatened a repeat of the May 13 riots.
— FMT News

Merry Christmas: Water supply almost fully restored, says Air Selangor
Water supply has been restored to 98.4% of areas in Petaling, Hulu Langat, Sepang, and Kuala Langat as at 6am Wednesday (Dec 25) after an odour pollution incident in Sungai Semenyih.
— The Star Online

Konsortium Bumi eyes bigger slice of consultancy pie
With all the awards and diverse project implementations under its belt, Sarawak consultancy firm Konsortium Bumi Consultants and Services Sdn Bhd (Konsortium Bumi) is now eyeing to be the main consultant for big government projects in Sarawak.
— The Borneo Post

B4G programme: Illegal immigrants crowd Penang immigration office
Hundreds of illegal immigrants have been crowding the Malaysian Immigration Department’s Penang office, since yesterday, to seek repatriation under the ‘Back For Good’ (B4G) programme to return home without legal action.
— The Sun Daily

Threats facing state’s cultural tourism
The Colosseum in Rome, the Taj Mahal in India, and Angkor Wat in Cambodia have one thing in common – they are almost constantly inundated with throngs of smartphonewielding tourists eager to get their one-in-a-lifetime selfies with these iconic historical sites.
— New Sarawak Tribune

10% discount for Besraya, NPE, Lekas tolls for Xmas
Road users of class one vehicles traveling along the Sungai Besi Expressway (Besraya), the New Pantai Expressway (NPE) and the Kajang-Seremban Expressway (Lekas) will enjoy a 10% discount tomorrow in conjunction with Christmas.
— The Sun Daily