Lao morning news for May 21 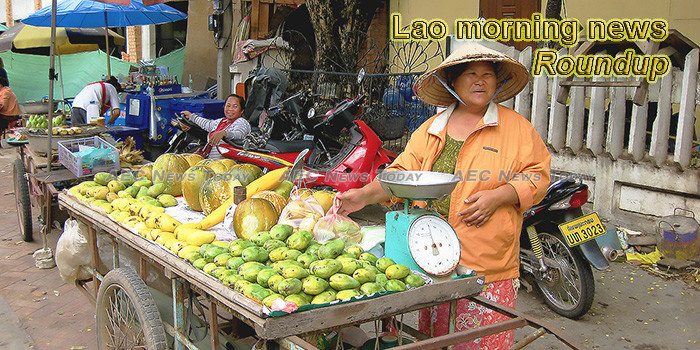 Lao gov sits on dam collapse report waiting on Seoul’s approval on what to say
Almost one year after a tsunami-like wall of water swept away homes, villages, people, cattle and agriculture fields in Champassak and Attapeu provinces of Lao PDR the government has reportedly been handed a report into the tragedy which lays the blame firmly at the feet of the project builders.
— AEC News Today

Interview: China’s Mekong Dam-building Mindset ‘Exported Downstream’ to Cambodia and Laos
The Mekong River extends for thousands of miles through China, Myanmar, Laos, Thailand, Cambodia and Vietnam, supporting more than 65 million people who depend on it for food, transportation, and commerce.
— Radio Free Asia

Don’t use cryptocurrencies, central bank warns
The Bank of the Lao PDR has warned commercial banks, businesses and members of the public not to buy, sell or use cryptocurrency for money transactions as this practice is illegal.
— Vientiane Times

Laos: Govt. to enforce ban on new banana plantations due to overuse of chemicals reported to cause deaths & illnesses
The government of Laos has vowed to enforce a ban on the granting of land for new banana plantations and punish local officials who violate it, amid a controversy over the illegal overuse of pesticides that residents say are causing pollution and destroying their livelihoods.
— Business & Human Rights Resource Centre

American Filmmaker Promotes Gender Balance In Lao Legal Field
On May 17-18, 2019, the U.S. Embassy in Vientiane hosted a filmmaker from the American Film Showcase programme who visited multiple Lao legal institutions and presented excerpts from her documentary film on gender and rule of law.
— KPL

Laos develops mobile app for livestock management
The Department of Livestock and Fisheries under the Ministry of Agriculture and Forestry has signed with Germany’s TE-FOOD International to develop a mobile application which will make the management of livestock farms more efficient and cost effective.
— Vientiane Times (paywall)

Laos prepares master plan for geographic information system
The Ministry of Natural Resources and Environment has drawn up a master plan for the establishment and utilisation of National Spatial Information and Infrastructure in Laos.
— Vientiane Times (paywall)

THE U.S. AND LAO PDR COOPERATE TO IMPROVE WELL-BEING AND SELF-RELIANCE OF PERSONS WITH DISABILITIES
The United States continues to play a leading role in helping to improve the well-being of people with disabilities in Laos.
— USAID

Festival enhancing ethnic cultures between Vietnam, Laos closes
The culture, sports and tourism festival of ethnic minority groups along the Vietnamese – Lao border wrapped up in A Luoi district of the central province of Thua Thien – Hue on May 19.
— Vietnamplus

Media asked to take the lead in banning advertising of dubious medical products
Media personnel from newspapers, radio, and television in Vientiane met last week to discuss ways to put a stop to the advertising of products and food items that falsely claim to promote good health.
— Vientiane Times (paywall)

New cave opens to the public in Vangvieng
Since its recent discovery in Vangvieng district, Vientiane province, Tham Nangfar cave has been made accessible to visitors and is now open to the public, offering free entry and an exciting new option for travellers to the region.
— Vientiane Times

HCM City facilitates youth cooperation with Laos
Ho Chi Minh City will provide the most favourable conditions for its young people to increase cooperation with their Lao peers, to contribute to fostering the special traditional relations between the two countries, said a city official.
— Viet Maz

Road upgrades pave way for development in Xayaboury
Xayaboury province has given the green light for local companies to build a 14-km asphalted road and provide drainage channels and lighting for another road in Hongsa district.
— Vientiane Times (paywall)

Lao Villager Dies After 8 Years in Jail Over Land Grab Protest
A Lao villager held in jail since 2011 as a leader of a land protest in the country’s Salavan province has died in custody, with officials citing natural causes but villagers fearing torture, sources in the country say.
— Radio Free Asia

Visiting Luang Prabang, Laos: Social Responsibility In A Tourist Mecca
While Satri House felt like the hotel you’d obviously stay at when disembarking from The Jungle Cruise, that paled in comparison to the Adventureland-without-the-Dole-Whip vibes permeating the town of Luang Prabang.
— One Mile at a Time