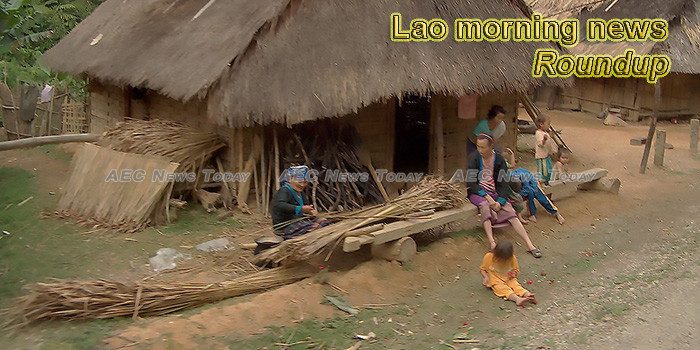 Laos To Get Its First Smart City
The Laos government has plans to set up a smart and eco city in its northwestern Oudomxay province within the province’s Namor district and adjoining Luang Namtha district in the province of the same name, the Vientiane Times wrote.
— Investvine

MICE meets sustainability and responsible tourism in Laos
Sustainability and the awareness of the environmental impact of a business may have on its local surroundings is, or should be, at the forefront of hospitality companies seeking success in the 21st century.
— Travel Daily Media

Rice seedlings to be sent to Laos after disasters
Deputy Prime Minister Vuong Dinh Hue has asked the Ministry of Agriculture and Rural Development to supply 300 tonnes of rice seedlings from the national reserve as a relief aid to help Lao people restore production in the post-natural disaster time.
— VietnamNet Bridge

Lao gov’t mulls foreign worker regulations
The Lao Ministry of Labor and Social Welfare and other government bodies held a discussion on the draft of a labor regulation addressing the issue of foreign workers in Laos on Monday.
— Xinhua

14th Food Festival To Be Held Next Week
The annual Lao Food Festival designed to promote Lao cuisines and Lao women’s entrepreneurship will be held at Chao Anouvong Park, Vientiane Capital on Jan 23-26, a press conference was told on Tuesday.
— KPL

Japan Promotes Discussion On Value-Added Tax
The Tax Department of the Ministry of Finance and Japan held a consultation meeting on Jan 8 to learn opinions from the public on Value-Added Tax (VAT).
— KPL

Children’s Hospital Urged To Lift Its Service Standard
Deputy Minister of Health, Dr Phouthone Meuangpak has urged the management of the Children’s Hospital to make greater efforts to raise the standard of its medical services.
— KPL

Carrying On Culture A Long Way from Laos: A Conversation With Vansana Nolintha
Vansana Nolintha was sent from Laos to live in the United States when he was just 12 years old. His parents wanted a better life for him and his sister Vanvisa who soon followed her brother to Greensboro, North Carolina. There were major hurdles right from the start.
— WUNC

BY 2019 THERE IS A HIGH RISK OF MALARIA
Malaria is one of the most prevalent diseases of the government and the Ministry of Health, where the disease is caused by mosquitoes.
— Vientiane Mai

Scoot launches new Laos route with flights sale
Scoot’s new route to landlocked Laos — neighbouring countries include Vietnam, Thailand, Cambodia and China — is set to to introduce travellers to what the airline describes as a must-see destination.
— The West

THE LAO GOVERNMENT HAS REGISTERED MORE THAN 40,000 FOREIGN WORKERS IN LAOS
The Government of the Lao PDR has registered and issued temporary passport permits for more than 42,000 illegal foreigners in the past To move illegal foreigners of Lao PDR to legal and regulatory management. Of the sector closely related.
— Vientiane Mai

Head to Oudomxay for the Khmu festival
Visitors are in for a treat if they attend the Khmu ethnic group festival taking place in Xay district, Oudomxay province, later this month.
— Vientiane Times