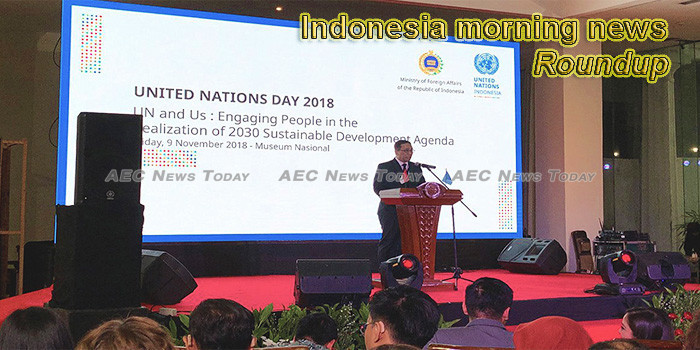 Indonesia central bank may cut key rate for fourth time since July: Reuters poll
A small majority of economists expect Bank Indonesia to cut its benchmark rate for the fourth straight month at its meeting this week to support the economy, a Reuters poll showed on Monday.
— Reuters

Nadiem Makarim Resigns from Gojek, Ready to Be Jokowi’s Minister
Nadiem Makarim, the founder of the country’s first decacorn Gojek, said that President Joko “Jokowi” Widodo had asked him to be a minister of the new cabinet.
— Tempo.co

Indonesia seeks to increase coffee output amid world glut
THE world has more than enough coffee, and Indonesia is looking to add to the glut.
— The Business Times

‘Former rival’ Prabowo to become Jokowi’s defense minister
The chief of the Greater Indonesia Movement (Gerindra) Party, Prabowo Subianto, who was Joko Widodo’s (Jokowi) rival in the election, claimed he was ready to support the Jokowi administration’s Working Cabinet II by focusing on the defense sector.
— Antara News

Fighting bribery with tech in Indonesia
In June 2017, a video of a policeman accepting a bribe in Indonesia went viral.
— The Asean Post

Shariah banking: Indonesia’s ‘bold plans’ for a troubled industry
In the world’s most populous Muslim nation, and under an administration keen to develop its Islamic economy, Indonesia’s oldest Sharia-compliant bank should have stood strong.
— Nikkei Asian Review (paywall)

Indonesia calls for respecting rules-based order in Indo-Pacific region
Amid uncertainty over the superpower rivalry in the region, Indonesia and Asian countries must uphold a rules-based order, which is also one of the key principles in the recently adopted ASEAN Outlook on the Indo-Pacific, a senior diplomat has said.
— The Jakarta Post

‘Jokowi can focus on development, but first issue Perppu on KPK Law’: Economists
After massive student protests happened nationwide last month demanding President Joko “Jokowi” Widodo to issue a regulation in lieu of law (Perppu) annulling revisions made to the 2003 Corruption Eradication Commission (KPK) Law, hundreds of economists have shown their support by publishing a joint research paper on the negative impact of corruption in the country’s economy.
— The Jakarta Post

‘Fastest extension’: Contracts signed for West Ganal and Pangkah oil and gas blocks
The Energy and Mineral Resources Ministry announced on Friday the signing of contracts with several companies to exploit the offshore West Ganal Block in the Makassar strait and the offshore Pangkah Block in East Java.
— The Jakarta Post

JCI Improves After President Jokowi’s Inauguration
The Jakarta Composite Index (JCI) was opened on a high in its inaugural trade following the inauguration ceremony of President Jokowi and Vice President Ma’ruf Amin on Sunday, October 20, with trades at the Indonesia Stock Exchange (IDX) (09:08) was held 0.45 percent stronger at 6,220.073.
— Tempo.co

Wika turns to perpetual bonds, subsidiary IPOs to boost financing capacity
PT Wijaya Karya (Wika) has planned a number of corporate actions ranging from issuing another perpetual bond to selling shares of its subsidiaries through an initial public offering (IPO).
— The Jakarta Post

One dead, thousands displaced by East Java tornado
A puting beliung (small tornado) swept through three different villages in Batu city in East Java over the weekend, leaving one dead and over 1,000 residents displaced.
— The Jakarta Post

Fisherfolk feel pinch of Jakarta Bay’s toxic green mussels
Residents of a fishermen’s village in Kamal Muara, North Jakarta, have said that they are suffering from a decrease in seafood sales, with reports stating that green mussels from Jakarta Bay carry serious health risks.
— The Jakarta Post

Ban on swimming? Myths hinder Indonesia’s development in halal tourism
Halal tourism has struggled to thrive in parts of the country, with some concerned about the consequences “Islamization” might have on the local cultures that embrace the halal tourist industry.
— The Jakarta Post

Civil society groups renew call for independent probe into acid attack on Novel
The three-month deadline extension President Joko “Jokowi” Widodo granted the National Police to solve the case of the acid attack against Corruption Eradication Commission (KPK) senior investigator Novel Baswedan is approaching its end, prompting calls for the formation of an independent team free from police involvement amid a lack of reported progress.
— The Jakarta Post

Wamena riots not the result of ethnic conflict, says Papua governor
Papua Governor Lukas Enembe has claimed that riots that broke out in Wamena, Wijaya regency, were not the result of conflict between Papuans and non-Papuans, adding that the province’s indigenous residents had tried to protect visitors and migrants from rioters.
— The Jakarta Post

Drone photography walks fine line between art, aviation safety hazard
The rising popularity of drone photography has allowed Jakartans to appreciate the beauty of the capital from up above.
— The Jakarta Post