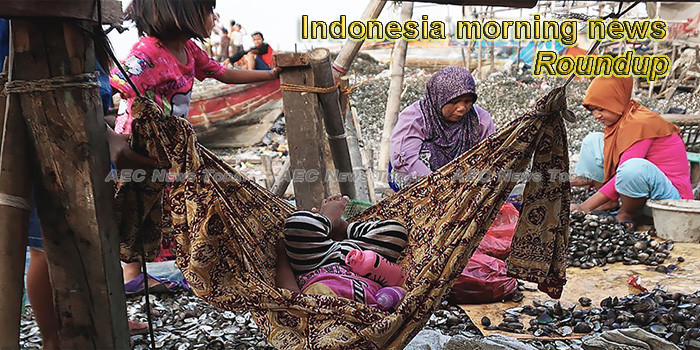 BPOM takes contaminated stomach drugs off market over cancer risk
The Indonesian Food and Drug Monitoring Agency (BPOM) has suspended sales of drugs containing ranitidine, commonly used to treat stomach problems, following reports from the United States and Europe that the medication may be contaminated with a carcinogenic substance.
— The Jakarta Post

World Bank downgrades Indonesia growth outlook, calls for reforms on grim global economy
The World Bank has cut Indonesia’s economic growth forecast for 2019, calling for reforms for East Asia and Pacific economies as they will be under long-term threat from increasing global trade tensions.
— The Jakarta Post

Indonesian Military Demotes 3 Members for Wives’ Social Media Posts About Wiranto Attack
The Indonesian Military, has taken disciplinary action against three of its members after their wives raised doubt on social media over Thursday’s attack in Banten on Chief Security Minister Wiranto by an Islamic militant.
— Jakarta Globe

New capital city design to incorporate SDGs: Ministry
The Environmental Affairs and Forestry Ministry confirmed that the design of the new capital city, to be located in East Kalimantan, will apply the principles of Sustainable Development Goals (SDGs).
— Antara News

Gov’t wants to finalize anti-sexual violence bill if it continues to remain in limbo in parliament: minister
The Eradication of Sexual Violence Bill (RUU-PKS) may still be a long way from ratification, but the government has decided to take matters into its own hands to push for its immediate passing into law.
— Coconuts (paywall)

Bali bombings: 17 years on, terror still haunts
Tumini’s feet suddenly gave up on her as she fell down during a vigil at the Bali bombing memorial in Kuta on Saturday evening.
— The Jakarta Post

Singapore offers Indonesia help to combat ‘scourge’ of haze
Singapore has reached out to Indonesian authorities to offer assistance and urge action in combating the “perennial scourge” of haze on the region, with no response from Indonesia thus far, the Ministry for the Environment and Water Resources (MEWR) said in written responses to Parliament queries last week.
— Business Mirror

Tokopedia to Add $12b to Indonesia’s Economy in 2019
E-commerce giant Tokopedia is on course to nearly triple its contribution to the Indonesian economy this year, creating hundreds of thousands of new jobs, lowering prices and promoting economic equality across the archipelago, according to a recent study.
— Jakarta Globe

Most public service jobs in Indonesia don’t need PhD
An ambitious target was set by the former administrative and bureaucratic reform minister, Yuddy Chrisnandi. In 2016, he stated that there were around 4.5 million public officials, but only around 2 percent, or 90,000, had a doctoral degree.
— The Jakarta Post

Indonesia’s agency set to manage funds for environmental protection efforts, carbon trading
Indonesia is one step closer to implementing a carbon-pricing scheme within the domestic market as part of efforts to achieve its emission-reduction targets following the launch of a public service agency (BLU) tasked with managing funds related to environmental protection and conservation.
— The Jakarta Post

Positive business activity maintained despite slow growth: BI
The latest business survey conducted by Bank Indonesia pointed to positive growth in the third quarter of 2019, despite the economy’s decelerating, compared with conditions in the previous period.
— Antara News

Indonesia on alert after minister attacked
The government has heightened security around the country after a senior minister was attacked with a knife in broad daylight in Pandeglang, Banten, on Thursday.
— The Jakarta Post

Sri Mulyani: Plastic Excise Implementation Awaits DPR’s Decision
Finance Minister Sri Mulyani Indrawati said that the government’s plan to impose tax on plastics could not be applied yet since its discussions were still afoot in the House of Representatives (DPR).
— Tempo.co

Jokowi urged to order assessment of police’s handling of protests
The Civil Society Coalition has urged President Joko Widodo (Jokowi) to order an evaluation to delve into the manner in which the police handle student demonstrations in Jakarta and the adjoining areas.
— Antara News

Govt provides 40,000 houses to victims of Lombok earthquake
The government has handed over 40,000 quake-resistant houses to people in three regencies in West Nusa Tenggara province who were affected by an earthquake on Lombok in 2018.
— The Jakarta Post

Jakarta eyes bike-sharing service to promote eco-transit
Jakarta aims to follow in the footsteps of many cities around the world where eco-friendly mobility by means of riding a bicycle is highly encouraged through bike-sharing programs, amid the longstanding issue of air pollution and traffic congestion in the capital.
— The Jakarta Post

BNPB confirms July 2019 as past century’s most sweltering month
Head of the National Disaster Mitigation Agency (BNPB) Doni Monardo confirmed that July 2019 was the hottest month in the past century owing to global warming.
— Antara News

Jokowi to continue obliging public with selfies despite Wiranto attack
President Joko Widodo (Jokowi) remains undeterred by the attack on one of his ministers, Wiranto, and affirmed that he will continue to oblige the public with selfie pictures.
— Antara News

President urged to form fact-finding team over Kendari shooting
The lawyer team of two students killed in a rally outside the Southeast Sulawesi Provincial Legislative Assembly (DPRD) building on Sept 26 have appealed to President Joko Widodo to set up an independent fact-finding team to probe the case.
— Antara News

Realizing dignified world of work through ILO Convention No. 190
The nation’s people were left in a state of shock and disbelief after the case of Baiq Nuril Maknun, a former teacher of SMAN 7 Mataram, West Nusa Tenggara (NTB), came to light some time ago.
— Antara News

Minister wants museums developed as symbols of civilization
Education and Culture Minister Muhadjir Efendy has appealed to Indonesia’s regional governments to seriously manage museums as a symbol of civilization and a means for the younger generations to study the journey of this nation.
— Antara News