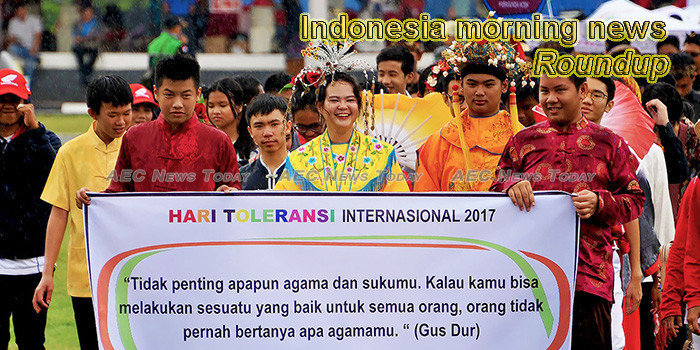 The Minimum Wage in Indonesia: Increased by 8.5% for 2020
On October 15, 2019, the Minister of Labor issued circular B-M 308, 2019, which mandates provincial governors throughout Indonesia to increase their provinces’ minimum wage by 8.51 percent, starting from January 1, 2020.
— ASEAN Briefing

Western plastics ‘poisoning Indonesian food chain’
The burning of plastic waste in Indonesia, much of which has been sent there by the West, is poisoning the food chain, the BBC has learned.
— BBC

Indonesians May Soon Need a License to Get Married
The government is mulling over a plan to require couples who want to get married to take pre-marital lessons on family life and children welfare and get certified before they tie the knot, a minister said.
— Jakarta Globe

Bank Indonesia: Halal Food Industry to Reach US$1.8tn by 2023
Bank Indonesia Governor Perry Warjiyo projected that halal food industry will be worth US$1.8 trillion by the end of 2023 as reported recently by Global Islamic Economy Report 2019/2020.
— Tempo.co

Indonesians quitting ‘rice addiction’ over diabetes fears
Indonesian Mirnawati once ate rice with every meal, but its link to diabetes convinced her to join a growing movement to quit a staple food in the third biggest rice-consuming nation on Earth.
— CNA

Medan Bomber’s Wife Plans Another Attack in Bali: Police
New details have emerged a day after a suicide bomb attack at the Medan Metropolitan Police headquarters, with police saying the wife of the lone bomber is even more radicalized than her husband.
— Jakarta Globe

Ahok’s Return to Service Gets Jokowi’s Endorsement
President Joko “Jokowi” Widodo gave his blessing on Thursday to former Jakarta governor Basuki “Ahok” Tjahaja Purnama to return to public service as an executive at an as yet unnamed state-owned enterprise.
— Jakarta Globe

Employee Association: Survey Proves Weakening of KPK is Real
The Corruption Eradication Commission employee’s association (WP KPK) views that the public is aware of the weakening efforts done toward the anti-graft agency through the revised KPK Law.
— Tempo.co

Indonesia eyes top four in 2019 SEA Games, trims medal target
Indonesia has set a target of finishing in the top four during the forthcoming 2019 Southeast Asian (SEA) Games in the Philippines, and has also reduced its gold medal target.
— Xinhua

Australia reiterates commitment to supporting Indonesian sovereignty
The Australian government is firmly committed to supporting the sovereignty and territorial integrity of the Republic of Indonesia, Australian Ambassador to Indonesia Gary Quinlan AO stated in Jakarta on Wednesday night.
— Antara News

Jokowi means investment, tells regional leaders to cut red tape
President Joko “Jokowi” Widodo has doubled down on his message on deregulation, calling on regional leaders to issue fewer regulations to keep the government agile in responding to economic development and to be more welcoming of investors.
— The Jakarta Post

Indonesia’s Travelio raises $18M to help tenants rent apartments
More than 50% of residential apartments and other real estate properties in Jakarta are currently vacant, according to official estimates.
— Tech Crunch

NU relaxes ban on non-Muslim greetings
Muslims are allowed to use the greetings of other religions in order to preserve unity between Indonesians, according to Syaftudin Syarif, the secretary-general of the East Java branch of Nahdlatul Ulama Muslim (PWNU), on Tuesday.
— The Jakarta Post

GrabWheels Services asked to Stop Before Safety is Improved
The Indonesian Consumers Foundation (YLKI) urged the management of ride-hailing firm Grab to stop the operations of its latest e-scooter service dubbed the GrabWheels due to safety concerns.
— Tempo.co

Special treatment for businesses in KPBU scheme
The Ministry of Public Works and Public Housings was committed on special treatment to the private sector under the Public-Private Partnership (KPBU) scheme, mainly in terms of funding infrastructure projects, the director general said here, Thursday.
— Antara News

Indonesia, Colombia to undertake feasibility study on market access
Indonesia and Colombia have agreed to shortly initiate a Joint Feasibility Study (JFS) under its efforts to tap avenues for increasing access of several Indonesian export goods to the Colombian market.
— Antara News

Jokowi’s son pushes ahead to get PDI-P ticket for mayoral run
While the Surakarta chapter of the Indonesian Democratic Party of Struggle (PDI-P) has rejected his nomination, Gibran Rakabuming Raka, the eldest son of President Joko “Jokowi” Widodo has marched ahead to the party’s provincial chapter in his attempt to get support for his mayoral run.
— The Jakarta Post

VP underscores significance of public participation in policy making
Vice President Ma’ruf Amin drew the collective attention of all policy makers at the central and regional levels to involve the public in the policy-making process through sound communication.
— Antara News

Indonesia commits to ICPD promises, but not endorse Nairobi Summit statement
The Indonesian government insisted on Wednesday its strong commitment to living up to the promise made during the landmark International Conference on Population and Development (ICPD) in Cairo, Egypt 25 years ago.
— The Jakarta Post

Pelindo II subsidiary eyes Patimban Port
PT Indonesia Kendaraan Terminal (IPCC), a subsidiary of state-owned port operator PT Pelabuhan Indonesia II (Pelindo II), said it hopes the government will appoint it to be the operator of the Patimban Port, although the government has said it plans to name a private company to operate the port in Subang, West Java.
— The Jakarta Post

‘We listened to the majority’: Agency claims most Jakartans approve of roofless pedestrian bridge
The Jakarta administration claims that its decision to remove the roof of a pedestrian bridge on Jl. Sudirman connecting Wisma Bumiputera and Astra Tower has received widespread support from residents in the capital.
— The Jakarta Post

You up?: Jokowi the midnight caller
President Joko “Jokowi” Widodo opened up about the ups and downs of being president at a forum with journalists in Central Jakarta on Thursday.
— The Jakarta Post

Vicious cycle of broken homes entraps generations of migrant worker families
After 22 years working as a migrant worker in Singapore, Mudaya Tatik, 50, was finally reunited with her husband in Blitar, East Java.
— The Jakarta Post

7 Killed in Another Cipali Toll Road Accident Early Thursday
Seven people were killed and dozens sustained injuries in yet another accident in Cipali Toll KM 117.8 of the route from Palimanan to Jakarta in the early hours of today, November 14, at 00:15 a.m.
— Tempo.co

Learning to live green at Kampung Hijau Berseri
The gates to the neighborhood are covered with vines and many other plants.
— The Jakarta Post