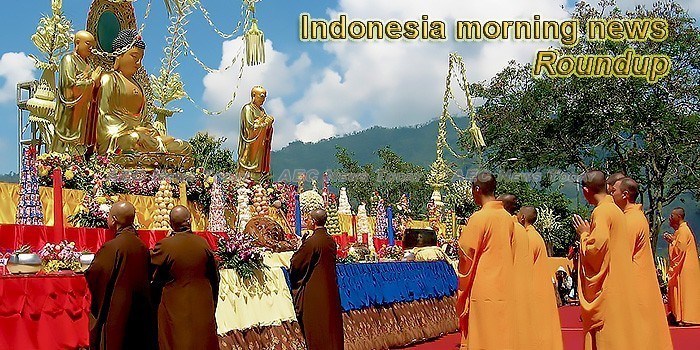 Indonesia seen swinging back to trade deficit in April – Reuters poll
Indonesia is seen recording its first trade deficit in three months in April, with exports and imports predicted to continue their plunge, a Reuters survey showed on Monday.
— Reuters

Poor fishery management costs Indonesia $7 billion per year. Here’s how to stop it
Indonesia’s efforts to protect its fisheries, an important food source for the world’s fourth most populous country, by seizing and blowing up foreign poaching vessels has become well known globally and is paying off .
— MENAFN

Indonesia issues travel advisory as monkeypox case confirmed in Singapore
Indonesia has advised its nationals in Singapore to calm down and watch closely development of the situation through media and the country’s Health Ministry website after confirmation of a monkeypox case in Singapore.
— Xinhuanet

Govt Forces Airlines to Lower Ticket Prices
The Transportation Ministry will cut the upper limit tariff or airplane tickets by about 15 percent.
— Tempo.co

Various capital sites proposed by past presidents
The plan to relocate Indonesia’s capital is not new.
— The Straits Times (annoying popups)

Retail sales expected to increase 30-40 percent ahead of holiday
The Association of Indonesian Retailers (Aprindo) is projecting that retailers will see a 30 to 40 percent increase in sales during Ramadan and Idil Fitri, supported by the inflation rate, which was less than 3 percent in the first quarter.
— The Jakarta Post

Indonesia observes World Malaria Day in Bali, highlights 5 provinces that have yet to eradicate the disease
Did you know that five Indonesian provinces have yet to declare themselves Malaria-free? This important fact was highlighted during the observance of this year’s World Malaria Day in Indonesia, which took place today in Bali.
— Coconuts Bali

Indonesia: External risks to keep BI on hold – TDS
Mitul Kotecha, senior emerging markets strategist at TD Securities, suggests that after the Bank Indonesia left policy rates unchanged at its meeting on 25th April, citing efforts to strengthen external stability, they are expecting the same at the meeting on Thu 16 May, with BI likely to sound cautious.
— fxstreet.com

Govt considers swapping scheme for buildings as part of capital relocation plan
In trying to lower the cost of relocating Indonesia’s capital, the government has said it would be open to swapping ownership of buildings in Jakarta with suitable ones at the new location, which is still being considered.
— The Jakarta Post

Five smartphone brands control 80% of Indonesian market
A market analytics firm says it expects global smartphone shipments to decline this year, while another company has reported that shipments to Indonesia were Asia Pacific’s highest at 38 million units sold last year.
— The Jakarta Post

Effective family planning is critical for future of Indonesia
High fertility rates in the world’s fourth biggest country continue to pose a threat to the health of the nation and its prosperity, writes Jenna Dodson.
— Irish Examiner

Witness Supriyono claims “fees” from KONI to ministry normal practice
Treasurer to Assistant of the Youth and Sports Ministry (Kemenpora) for National Sports Achievement Improvement for 2017-2018 Supriyono claimed it was common for the Indonesian National Sports Committee (KONI) to give a “fee” to the ministry.
— Antara News

Minister cautions against ongoing threats to national ideology
Defense Minister Ryamizard Ryacudu has appealed to heads of regional offices of the Defense Ministry to always give priority to upholding the state ideology of Pancasila and guarding against possible threats to it.
— Antara News

Residents called to avoid dangerous zone post-Mt Agung Eruption
The Center for Volcanology and Geological Disaster Mitigation (PVMBG) has advised residents, climbers and tourists not to do any activity in the Hazard Estimated Zone which covers all areas within a four kilometer radius from the crater of Mount Agung’s summit in Karangasem District, Bali, which erupted and issued a loud bang on Sunday (May 12) at 10:24 p.m local time.
— Antara News

Indonesia to boost modest fashion exports
As the country with the largest Muslim population in the world, Indonesia is aiming to promote its modest fashion scene to the global market through exports of Muslimwear.
— The Jakarta Post

Indonesian director calls for LGBT+ debate after film ban
An Indonesian director who received death threats over his latest film warned against a return to authoritarianism on Friday, calling for more debate on LGBT+ issues.
— Intellasia

Why is Indonesia looking to relocate its capital city and could it really pull it off?
Many rolled their eyes late last month when Indonesia’s government yet again declared its intention to move the national capital.
— Intellasia

Indonesia morning news for May 26