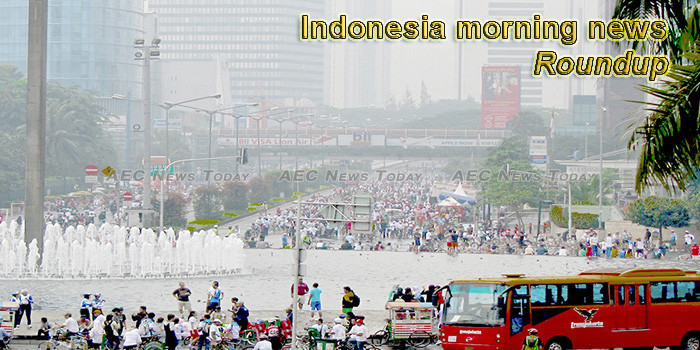 Half content of toxic waste container goes missing, triggering suspicion
A team of 13 lawmakers recently inspected containers of toxic waste currently being kept at Batu Ampar Port, Batam, Riau Islands, that are set to be returned to their countries of origin, and were shocked to find that half the contents of one container was missing.
— The Jakarta Post

Plant disease threatens thousands of hectares of rubber plantations
An outbreak of Leptosphaeria leaf spot (Pestalotiopsis spp) that has hit many rubber plantations in Indonesia is expected to significantly reduce the country’s natural rubber production.
— The Jakarta Post

Indonesia seeks to set up centres for workers’ kids
The Indonesian embassy is seeking assistance from the Malaysian go­vernment to allow the setting up of lear­ning centres for children of Indonesian wor­kers in the peninsula, says its ambassador to Malaysia Rusdi Kirana.
— Star Online

Nuril on course to be first defamation convict freed by presidential amnesty
Baiq Nuril Maknun is not the first — and may not be the last — Indonesian to fall victim to the country’s draconian cyber law, yet she is undoubtedly the first person convicted of defamation on course to being freed by the President.
— The Jakarta Post

Indonesians urged not to stigmatize drug users
Head of Jakarta’s Drug Rehabilitation Center (BNNP), Wahyu Wulandari, called on netizens to refrain from commenting on celebrities caught in drug-related cases because stigmatizing them with insensitive language could affect their psychology.
— Antara News

New EV policies to boost manufacturing
The automotive industry will get a power injection from President Joko “Jokowi” Widodo’s two proposed policies that are expected to increase manufacturing growth and broaden the electric vehicle (EV) market in the country.
— The Jakarta Post

Kominfo Reminds Public to be Careful Using the Popular FaceApp
Communication and Informatics Ministry’s (Kominfo) director-general for applications and informatics, Semuel Abrijani Pangerapan reminded all to be more thoughtful before downloading a new application–including the popular photo-editing app FaceApp.
— Tempo.co

El Nino: Drought spreading in seven provinces
With thousands of villages suffering from drought as Indonesia faces an intense dry season this year because of the El Nino weather phenomenon, experts have called on the government to take long-term preventive action by making the most use of rainwater.
— The Jakarta Post

How Indonesia is trying to avoid the pitfalls of Belt and Road cooperation
At the second Belt and Road Forum in Beijing in April this year, Indonesia took its first careful steps toward embracing the Belt and Road Initiative (BRI) in Indonesia when President Joko “Jokowi” Widodo announced 30 projects worth US$91.1billion for Chinese “Belt and Road” investment
— The Jakarta Post

Indonesia to host infrastructure dialogue with Africa
Indonesia is set to hold the Indonesia-Africa Infrastructure Dialogue (IAID) next month to follow up on its newfound interest in Africa and to make its presence on the continent felt by expanding its trade and investment portfolio.
— The Jakarta Post

UAE to Invest in Gresik Port, Industrial Zone
The United Arab Emirates (UAE) is planning to invest in a container port and industrial zone in Gresik, East Java Province.
— Tempo.co

Freeport’s gold and copper sales down 50% due to mine transition
Gold and copper miner PT Freeport Indonesia (PTFI) sold less copper and gold in the first half of 2019, decreasing to almost half the amount sold during the same period last year due to the transition from open pit to underground site.
— The Jakarta Post

Indonesian embassy in Yemen shuts, shifts to Oman
President Joko Widodo (Jokowi) signed a decree of temporary closure for security reasons of the Indonesian embassy in Sana’a, the capital of Yemen, on July 17, 2019, and shifted its embassy to Muscat, Oman.
— Antara News

Activists slam Jokowi’s vision, calling it not environmentally friendly
Supporters of President Joko “Jokowi” Widodo cheered when the president-elect gave his first speech on July 14, titled “Indonesian Vision”, after his win in the 2019 presidential election.
— The Jakarta Post

Social Ministry welcomes Singaporean delegates
The Indonesian Ministry of Social Affairs welcomed a delegation from Singapore’s Ministry of Social and Family Development, on a working visit to gain knowledge of activities conducted in Melati Social Rehabilitation Hall for the Deaf.
— Antara News

Rupiah, regional currencies barely unchanged, shares gain ground
The rupiah strengthened further on Thursday to the 13,000 level against the US dollar on the spot market as most Asian currencies traded inside a tight range ahead of the European Central Bank (ECB) meeting latter on Thursday.
— The Jakarta Post

Greater synergy between governments crucial for inflation control: BI
Bank Indonesia (BI) Governor Perry Warjiyo reiterated the significance of boosting synergy between the central and regional governments to maintain and control the inflation rate in 2019 at 3.5 percent, give or take one percent.
— Antara News

‘Limit children’s screen time’, minister urges parents to help their kids study more
Women’s Empowerment and Child Protection Minister Yohana Susana Yembise has raised a call for parents across the country to limit their children’s screen time and encourage them to focus more on their education.
— The Jakarta Post

Luhut Sees Africa as Promising Export Market for Indonesia
Coordinating Minister for Maritime Affairs Luhut Binsar Pandjaitan hopes that Indonesia can take advantage from the Indonesia-Africa Infrastructure Dialogue (IAID) to expand product exports to the African continent. The IAID will be held in Bali on August 20-21, 2019.
— Tempo.co

Jokowi to issue regulations to support electric vehicles this week
President Joko “Jokowi” Widodo is slated to sign two long-awaited policies for the development of Indonesia’s electric vehicle industry this week, a senior minister has revealed.
— The Jakarta Post

Financial markets stable in H1 amid global slowdown: OJK
Indonesia’s financial markets were relatively stable during the first half of this year, as seen in the encouraging performances of the stock market and rupiah, despite constant economic turbulence worldwide.
— The Jakarta Post

Drought triggers water crisis in Tangerang
Thousands of villagers in Tangerang regency, Banten, like many people across Indonesia, are suffering a shortage of clean water as the country faces an intense dry season this year.
— The Jakarta Post

Women in terror networks expand roles
On a Sunday morning in Surabaya, East Java, last year, two churches were shaken by a string of suicide bombings that led to dozens of deaths.
— The Jakarta Post

Jakarta’s history in hologram aims to attract millennials
The capital’s tourism and culture agency, in collaboration with the National Monument’s [Monas] site management, has initiated a hologram exhibition that showcases the historical timeline of the capital in celebration of Monas Week 2019.
— The Jakarta Post

Indonesian bean-to-bar choco maker Krakakoa raises funds from IIX, others
Krakakoa, a bean-to-bar chocolate maker based in Indonesia, has raised an undisclosed amount from Singapore’s Impact Investment Exchange (IIX) through its IIX Growth Fund (IGF) as it gears up for a series A round in 2020.
— Tech in Asia

Burning-free farming project bears fruit in South Sumatra
Haze from forest and bush fires has long been a major problem, not only for locals, but also for people in neighboring countries.
— The Jakarta Post

Indonesia hopes for more airport Hajj clearance next year
Indonesia hopes fast tracking for its Hajj pilgrims, known as the “Makkah Road” initiative, will be expanded to at least two more airports in Java next year, which serve as embarkation points from the country’s most populated island and its neighbors, a government official said Thursday.
— Arab News

Indonesia’s most active volcano a magnet for tourists
Indonesians living by Mount Merapi make a living by ferrying hundreds of tourists to its ‘danger zone’.
— Aljazeera

Gerindra proposes LGBT bylaw in Depok
All factions at the Depok Council in West Java have agreed to discuss a proposed draft bylaw to curb lesbian, gay, bisexual and transgender (LGBT) activities deemed to be rampant by conservative members of the council.
— The Jakarta Post

Jokowi Campaign Team to be Dismissed Officially on Friday
The elites of the political party supporting Jokowi – Ma’ruf is set to hold another meeting on Friday, July 26, regarding the official dismissal of the campaign team, said the team deputy secretary, Verry Surya Hendrawan.
— Tempo.co

Indonesia proposes Ambon as world’s music city
The Indonesian government has nominated Ambon, the capital of Maluku province and the most populous city, as the World’s Music City to the United Nation’s Educational, Scientific and Cultural Organization (UNESCO).
— Antara News

Aceh elephant gives birth to female calf, netizens encouraged to vote on name
A wild elephant captured by the Natural Resources Conservation Agency (BKSDA) in the mountains of Ulee Glee, Pidie Jaya, Aceh in 1994, gave birth to a female calf at 7 a.m. on Wednesday.
— The Jakarta Post