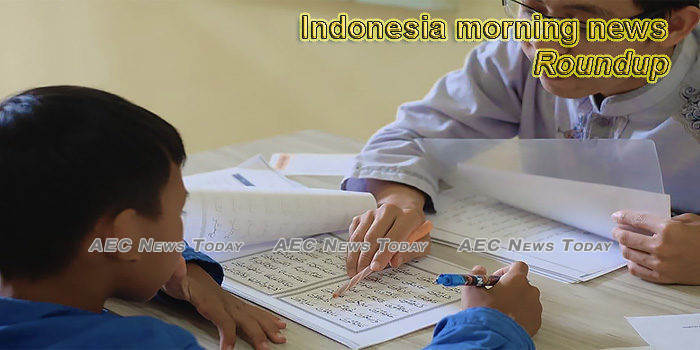 Rupiah Climbs to Trade Slightly Under 14,000 Per US$
The rupiah’s interbank currency in Jakarta managed to stay below Rp14.000 per US dollar. On Wednesday’s trade, December 18, the rupiah closed up 9bps or 0.06 percent to trade for Rp13,988 per US dollar.
— Tempo.co

Govt: Changing National Exam into Assessment Is Not a Trial
Head of Research and Development Agency at the Ministry of Education and Culture, Totok Suprayitno, asserted that the replacement of the national examination or UN (Ujian Nasional) is not an experimental program.
— Tempo.co

Indonesians to pay higher Schengen visa fees next year
Indonesian citizens will be required to pay a higher fee when applying for a Schengen visa starting Feb. 2, 2020.
— The Jakarta Post

Indonesia faces backlash over baby lobster export ban
A proposal by Indonesia’s new fisheries minister to remove a cap on exporting baby lobsters has come under fire, with critics saying it could deplete stocks around the archipelago and boost the fishing industry in competitor countries.
— CNA

Indonesia must move beyond GDP to assess welfare, equality: Economists
Indonesia needs to move beyond the gross domestic product (GDP) as the tool for measuring the nation’s prosperity, as the indicator fails when it comes to assessing welfare and inequality, economists have said.
— The Jakarta Post

Government, businesspeople hope omnibus bills passed by April
The government wants the discussions in the legislature over the drafts of the first two omnibus bills to start by mid-January so they can be passed into law by April.
— The Jakarta Post

Deputy Minister endorses efforts to optimize state assets
Deputy Minister of Finance Suahasil Nazara has pushed for efforts to augment state assets in the form of property, including buildings, in order to sustain the Indonesian economy in the midst of the rising global turmoil.
— Antara News

Indonesia Parades 6 Foreigners Arrested for Drugs on Bali
Indonesian authorities said Wednesday that they have arrested six foreigners for allegedly trying to smuggle drugs onto the tourist island of Bali.
— The New York Times

Casino Royale: Regional Heads Caught With Overseas Gambling Accounts
Indonesian officials are taken aback by the revelation that several regional heads own high roller-level accounts in casinos abroad, raising suspicions that the accounts might have been used for money laundering.
— Jakarta Globe

Russian Embassy makes preparations for Putin’s Indonesia visit in 2020
The Embassy of the Russian Federation in Jakarta is presently prepping to welcome its leader, President Vladimir Putin, who plans to embark on an official visit to Indonesia by 2020.
— Antara News

‘Vicious devil’ of diesel subsidies hinders Indonesia’s renewable energy development
The year 2019 has justified all the skepticism about Indonesia’s decarbonization efforts with progress remaining slow as the government continues to provide subsidies for dirty fuel.
— The Jakarta Post

Authorities seize smuggled supercars, luxury motorcycles worth Rp 21b
The Finance Ministry revealed on Tuesday a number of attempts to smuggle dozens of luxury cars and motorcycles worth at least Rp 21 billion (US$1.5 million) into the country through the Tanjung Priok Port in North Jakarta over the last three years.
— The Jakarta Post

Hanura in High-Profile Feud as Wiranto Urges Chairman to Step Down
The People’s Conscience Party, or Hanura, who was left without a House of Representatives seat after April’s election, was dealt another blow on Wednesday as founder Wiranto accused current chairman Oesman Sapta Odang of breaching the party line and urged him to give up his leadership.
— Jakarta Globe

Government wants more SMEs to go public
The government is encouraging small and medium enterprises (SMEs) to offer their shares to the public through the Indonesia Stock Exchange (IDX).
— The Jakarta Post

Jokowi Eyes Bogor Reservoirs as Jakarta’s Flood Mitigation
President Jokowi responded to yesterday’s floods across several Jakarta areas and maintained that the government is finalizing the construction of a reservoir in the area of Bogor.
— Tempo.co

Jakarta floods subsided ‘within 25 minutes,’ sewage system capable of handling heavy rain: official
Yesterday, Jakarta saw the worst floods to hit the capital since the last rainy season, but officials say that they subsided quickly and the city is not at risk of prolonged rain water overflow.
— Coconuts (paywall)

Government short on detail about ‘other options’ for rescuing Jiwasraya
The government is exploring a number of options to save state-owned insurer Asuransi Jiwasraya, which has been facing a liquidity problem since it failed to meet Rp 802 billion (US$54.14 million) in maturity payments.
— The Jakarta Post

KPK commissioners bid farewell amid setbacks, defeats
Members of the Corruption Eradication Commission (KPK) bid a rather somber farewell on Tuesday, recalling their achievements and acknowledging, with some bitterness, major setbacks and controversies hampering the antigraft agency over the last four years.
— The Jakarta Post

Wanted: Inspiring figures dedicated to humanity to receive 2020 Maarif Award
The Maarif Institute, a leading campaigner of Islamic pluralism, has returned with its biennial awarding event and is now looking for inspiring figures dedicated to promoting social justice and humanity to receive the 2020 Maarif Award.
— The Jakarta Post

Bright future for Coca-Cola as it replaces Pepsi in KFC Indonesia restaurants
The future is still bright for Coca-Cola Amatil Indonesia despite declining sales of carbonated drinks, as it has signed a partnership agreement with Kentucky Fried Chicken (KFC) Indonesia to become the latter’s soft drinks supplier after Pepsi leaves the country.
— The Jakarta Post

Supreme Court raises prison term for Polish man over treason, link with Papuan rebels
The Supreme Court has increased the prison sentence of Jakub Fabian Skrzypski, a Polish national and reportedly the first foreigner convicted of treason in Indonesia, to seven years in prison for his role in assisting a separatist group in Papua.
— The Jakarta Post

Money down the drain: Koi fish worth Rp 25 m swept away in Kediri floods
Residents of Pranggang village in Kediri, East Java, were shocked to discover that their prized koi, valued at Rp 25 million (US$1,785), were missing after two hours of heavy rains caused their five fish ponds to overflow.
— The Jakarta Post

KPK: Supervisory Board Hindering Works will Be Reported to Media
Deputy chairman of Corruption Eradication Commission (KPK), Alexander Marwata, demanded the public to not worry about the existence of a supervisory board.
— Tempo.co

‘Warung’ 2.0: traditional vendors embrace technology to develop business
Fast-paced advancements in technology over the past decade have affected almost every aspect of life.
— The Jakarta Post

Jakarta Shopping Malls Offer Year-End Midnight Sale
Indonesian Shopping Center Association (APPBI) of Jakarta announced its midnight sale programs which will be held in several regions of the city ahead of the year’s end.
— Tempo.co