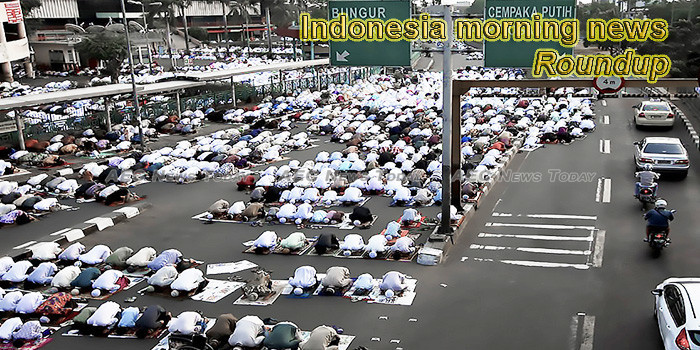 Power restored to most of Indonesia capital after 9-hour blackout
Power has been restored in most parts of Indonesia’s capital, Jakarta, after the city of 10 million people went without electricity for more than nine hours due to technical issues, according to the state power company.
— Aljazeera

2019 Sees 200 Cases of Sexual Assault against Children
The National Police HQ recorded there are 236 cases of child sexual assault occurred in January to May this year; yet only 50 percent of the total case was handled by the law enforcer.
— Tempo.co

Indonesia urged to ratify ILO convention, combat gender-based violence at work
Yuliana, a 25-year-old Indonesian worker in the garment industry, was sitting at her desk when a leader at the footwear factory she worked for suddenly grabbed her from behind.
— The Jakarta Post

Traveloka to offer Indonesia’s first flight delay insurance
Traveloka announced on Monday that it would be the first online booking platform in the country to provide a solution for the hassle of flight delays by offering On-Time Protection insurance.
— The Jakarta Post

Finance Minister opens for second roll out of tax amnesty program
Finance Minister Sri Mulyani Indrawati is open to the idea of giving taxpayers a second chance to come clean about assets kept abroad amid calls from the public, particularly the business world, for a new tax amnesty.
— The Jakarta Post

Coal demand to rise 12 percent next year: PLN
State electricity firm PLN has estimated that the coal use for electricity generation in Indonesia will increase by around 12 percent this year due to additional demand from new power plants.
— The Jakarta Post

Haze crisis returns to ASEAN
Having only just recovered from its worst haze crisis in 2015, Indonesia has been ramping up efforts to mitigate the impacts of forest and land fires across the country.
— The Jakarta Post

No city for old cars: Jakarta plans drastic measures to clear choking smog
How old is your vehicle now? Just a heads up: By 2025, Jakarta will no longer allow privately owned vehicles aged over 10 years old on its roads.
— The Jakarta Post

Indonesia’s blunt-talking billionaire Ambassador to Msia lays out vision for bilateral ties
Indonesia is seeking to turn a new page in its bilateral ties with Malaysia, with a view towards achieving mutual prosperity rather than creating competition.
— New Straits Times

Indonesia expects palm oil concession from Putin
Indonesia is expecting Russian President Vladimir Putin to continue providing favorable treatment when it comes to palm oil exports by dropping a plan to impose a higher import tariff for the key commodity.
— The Jakarta Post

Indonesia, S Korea agree to finalize CEPA talks by end of 2019
Indonesia and South Korea have agreed to set a target to finalize negotiation on Comprehensive Economic Partnership Agreement (CEPA) by the end of this year.
— Antara News

After a month, search for missing MI-17 Army helicopter continues
The search for an MI-17 helicopter that has been missing for over a month continued on Friday with the Indonesian Military (TNI) deploying military aircraft on reconnaissance missions to Papua.
— The Jakarta Post

182 reportedly die while seeking refuge in Nduga conflict
Volunteers grouped under the Nduga Solidarity Civil Society Coalition reported in a statement on Thursday the deaths of 182 civilians who were taking refuge in various areas after fleeing from their homes in conflict-ridden Nduga regency between December and July.
— The Jakarta Post

‘No distress call’: Basarnas searches for 31 still missing in South Kalimantan boat sinking
Emergency services have said they were alerted only three days after a fishing boat carrying 37 people sank on Tuesday off Matasiri Island in Kotabaru regency, South Kalimantan, primarily because it appeared that the vessel did not send a distress signal.
— The Jakarta Post

16 suspected of assaulting police in South Sumatra
The South Sumatra Police have arrested and named 16 people suspects for their alleged involvement in assaults against police officers on two separate occasions in the province’s Empat Lawang regency.
— The Jakarta Post

In rare decision, court overturns death sentence for French drug convict
A French national sentenced to death for smuggling drugs to Indonesia has had his sentence commuted to 19 years in prison by an appeals court in West Nusa Tenggara, in a decision deemed rare in a country known to have some of the world’s strictest drug laws.
— The Jakarta Post

Jakarta deputy governor to be selected by next batch of city councillors
Despite having conducted comparative studies as far as the Riau Islands and Central Java provinces to learn how to elect a deputy governor replacement, not to mention having held a series of meetings at home, the Jakarta councillors have come to the conclusion that they are unable to make a decision on the position, which has been left vacant for almost a year.
— The Jakarta Post

Protesters to Meet Jokowi on Closure of Komodo National Park
A group of people under the Community Forum of West Manggarai Tourism Defender (Formapp Mabar) said they would meet with President Joko “Jokowi” Widodo for talks about the planned closure of the Komodo National Park.
— Tempo.co

Young adulthood blues in Indonesia: Graduating universities and still dependent on parents
There is no survival guide for adulting.
— The Jakarta Post

Polygamous man accused of raping daughter beaten in detention
Rape suspect Sugeng Slamet, 44, sustained bruises during his first day at the Lumajang detention center in East Java following an attack by his cellmates.
— The Jakarta Post

Death toll of Banten’s earthquake has climbed to six
The death toll of the strong earthquake that rocked Banten Province on Friday has increased to six, according to the National Disaster Mitigation Agency (BNPB).
— Antara News

Cambodia Morning News For May 7