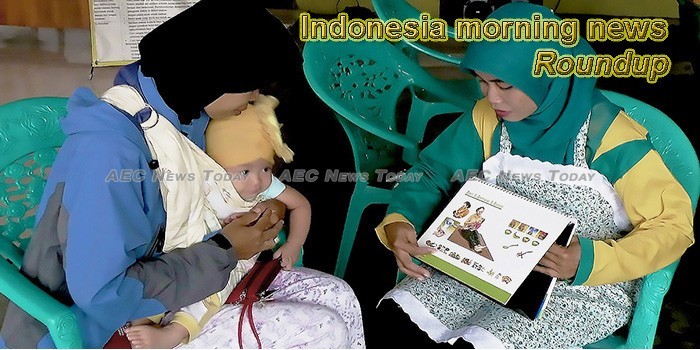 Indonesia sets target to export 450,000 cars in 2019
Trade Minister Airlangga Hartarto has said his ministry set a target to increase car exports to 450,000 this year. In the previous year, the country saw 346,000 car exports with total profits at US$4.78 billion.
— The Jakarta Post

Will the Voters protest be able to win Prabowo-Sandi?
In literatures on 2019 political campaigns and elections in Indonesia, popularity is a condition for image-building.
— Modern Diplomacy

Indonesia blocks EU spirits, link seen to palm oil spat -industry
European spirits makers say they are facing difficulties exporting drinks to Indonesia amid tension after Jakarta said it was unhappy with an EU decision that palm oil should not be considered a green fuel.
— Reuters

Hundreds diagnosed, 16 die from dengue fever in East Sumba
As many as 875 residents of East Sumba regency in East Nusa Tenggara province have been diagnosed with dengue fever and at least 16 people have died, a local official has said.
— The Jakarta Post

Joko Widodo: how ‘Indonesia’s Obama’ failed to live up to the hype
Five years ago he was south-east Asia’s democratic poster boy, Indonesia’s Obama. His face plastered across Time magazine with three words: A New Hope.
— The Guardian

How Mobile Learning Can Boost Indonesia’s Workforce
As the general manager of a busy 333-room hotel in Solo, I depend on my employees to take good care of all the local and international guests checking in and out every day, businesspeople coming for meetings and events, a busy F&B operation, not to mention maintenance of the pool, spa, gym and other facilities.
— The Jakarta Globe

Oil and gas lifting below Q1 target
Indonesia’s ready-to-sell oil and gas production, known as lifting, was recorded at 1.814 million barrels of oil equivalent per day (boepd) in the first quarter of 2019, 5.4 percent lower than the target of 2.205 million boepd stated in the 2019 state budget.
— The Jakarta Post

Indonesia votes: 6 things to know about the April 17 polls
Intellasia East Asia News Indonesians will head to the polls on April 17 to vote for their president and members of Parliament.
— Intellasia

Landslide in Sulawesi unveils problems in governance of mining sector
A landslide at an illegal gold mine in North Sulawesi in February that killed at least eight people has revealed a big problem in the mining sector: a lack of supervision.
— The Jakarta Post (paywall)

Surveys Pit Jokowi at 50 Percent against Prabowo 30 Percent
The presidential elections is less than two weeks away. Survey agencies have been releasing their poll results to predict the outcome.
— Tempo.co

Prabowo Subianto’s campaign for president in Indonesia is half-hearted
The crowd at the University of the Republic of Indonesia in the city of Bandung surges towards the stage in anticipation.
— Economist

Ministry announces crude price hike to $63.6 per barrel
The Indonesian Crude Price (ICP) has increased to US$63.60 per barrel in March as a result of the planned global supply cut, 3.73 percent higher than the February figure, the Energy and Mineral Resources (ESDM) Ministry announced on Thursday.
— The Jakarta Post

Hundreds Fined for Smoking while Riding Motorbikes
The new regulation banning motorcyclist to smoke while driving has only been in effect for less than a month. But hundreds of bikers had been ticketed for violating.
— Tempo.co

Marine debris likely to outnumber fish in sea by 2030: Minister Susi
Cautioning the residents of Banyuwangi District, East Java Province, on Thursday, against littering and polluting the oceans, Maritime Affairs and Fisheries Minister Susi Pudjiastuti said that if this continued, marine debris was likely to outnumber the fish at sea by 2030.
— Antara News

See the wild, customized creations of Indonesia’s ‘rebel riders’
The streets of Indonesia teem with two-wheelers, pulsing through dense traffic in the thick, tropical climate. In a country where more than 85 percent of the population owns a scooter, Indonesia has one of the largest Vespa enthusiast communities in the world—second only to Italy.
— National Geographic

Indonesia completes refarming of 800, 900 MHz frequencies
The Communications and Information Ministry has announced that it has completed the refarming of 800 and 900 hertz frequencies, giving customers faster speed for internet services on cellular devices.
— The Jakarta Post

Observer: Palm discrimination is a lesson against export dependence
Economist Faisal Basri said Indonesia must learn from the case of discrimination of palm oil and its derivatives by the European Union and reduce its dependence on commodity exports.
— Antara News

Indonesia’s Football Fever
Football inspires fanaticism in Indonesia. It also inspires danger. Football violence has killed about 75 fans in the past 25 years. Thousands more have been injured.
— AL Jazeera

Another decree to be issued if airlines fail to cut fares: Minister
The Transportation Ministry issued two regulations last week with the aim of pushing airfares down, however it said that it may issue another regulation if prevailing regulations do not help reduce prices.
— The Jakarta Post

Indonesia working hard to deal with EU’s ban on palm oil: minister
Indonesia has been working so hard to defend its national interests in facing the European Union’s ban on the use of crude palm oil for biofuels, Coordinating Maritime Affairs Minister Luhut Binsar Pandjaitan said.
— Antara News

MRT Jakarta Considers Stepping Up Train Headway
MRT Jakarta corporate secretary Muhammad Kamaluddin said that the company has yet to step up the headway of Ratangga despite the train boarded 70,000 passengers per day.
— Tempo.co

Is Indonesia prepared to defend its palm oil sector?
The government has shown its commitment to defending the palm oil sector from a negative campaign waged by the European Union (EU), which has been resilient in its stance against the commodity in recent years.
— The Jakarta Post (paywall)