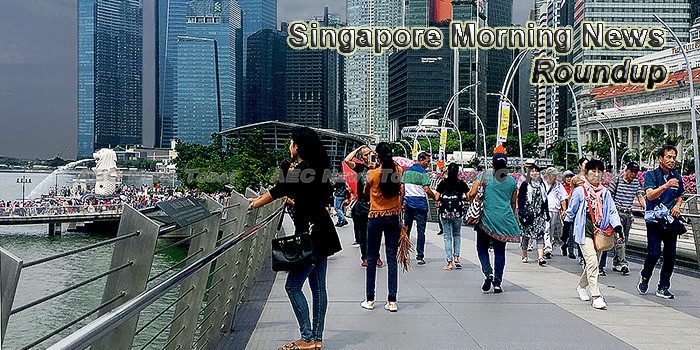 High-tech farms in Singapore take on cold-weather crops
In line with the Government’s push for farming productivity in Singapore – such as the recently enhanced Agriculture Productivity Fund and the announcement that farmland would be set aside to promote high-tech farming – more farms are exploring new methods to grow crops previously thought to be impossible to cultivate in Singapore’s climate.
— Fresh Plaza

First Singaporean woman detained for radicalism tried to join IS, become ‘martyr’s widow’
A 22-year-old infant care assistant who wanted to be an Islamic State (IS) “martyr’s widow” has become the first female to be detained in Singapore for becoming radicalised, said the Ministry of Home Affairs (MHA) on Monday (June 12).
— Today Online

Probiota Asia: World-leading probiotics summit comes to Asia and calls for abstracts
NutraIngredients-Asia is delighted to announce that the first Asia edition of the global probiotics and prebiotics summit, Probiota, will be held in Singapore in Octorber.
— FoodNavigator-asia

Singapore bus maker SC Auto to set up S$30m facility in Myanmar
HOMEGROWN bus manufacturer SC Auto is setting up a S$30 million facility in Yangon, Myanmar – its first foray overseas after focusing on operations here for over 20 years.
— The Business Times

S’pore, China can work together to add value to BRI
Singapore and Beijing can cooperate to add value to China’s Belt and Road Initiative (BRI), which the Republic strongly supports, said Minister for Foreign Affairs Vivian Balakrishnan in an interview with China Daily published yesterday. Below is an excerpt from the interview with Dr Balakrishnan, who was on a two-day official visit to China.
— Today Online

Could Singapore’s economy be on a downturn again?
Singapore’s economic outlook for this current quarter is on the downside after the soft patch in Q1. According to a report from Deutsche Bank, economic growth could again decline due because of a low base on imports.
— Singapore Business Review

Singapore, China seek to expedite RCEP trade talks
SINGAPORE and China will do their best to expedite talks on the Regional Comprehensive Economic Partnership (RCEP), Singapore’s foreign minister said, calling the potential pact a statement on the importance of free trade.
— The Business Times

Feedback wanted on proposed rules to raise legal smoking age, curb e-cigarette use
The proposal to raise the minimum legal age for smoking in Singapore, as well as prohibit the purchase, use and possession of vaporisers and e-cigarettes will be up for public consultation from Tuesday (Jun 13).
— Channel NewsAsia

Social inclusion and participation improve quality of life for seniors, vulnerable groups: Study
Senior citizens and people with disabilities are more likely to have better quality of life if they engaged in a social activity or sports, according to a study by the National Council of Social Service.
— Channel NewsAsia

Ex-Singapore Banker Expands Family Office
Bedrock is adding a Zurich office to those in Geneva, London and Monaco. The newest Swiss office will be run by a well-known Swiss private banker who began his career at Pictet in Singapore.
— Finews Asia