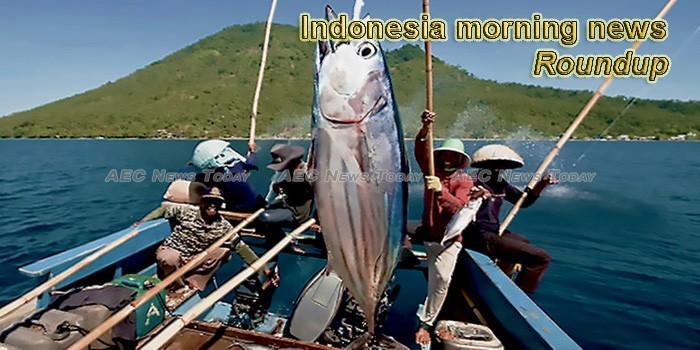 Indonesia’s inflation rate seen picking up pace in April
Indonesia’s annual inflation rate has likely picked up in April amid rising food prices ahead of the Muslim fasting month of Ramadan, according to a Reuters poll on Monday.
— Journal Pioneer

Economist urges cutting down on ‘vested interests’ to free up growth
Senior economist Faisal Basri of the University of Indonesia has said that President Joko “Jokowi” Widodo must eliminate “vested interests” in the government that had been putting the brakes on economic growth.
— The Jakarta Post

Cyr: Indonesia demonstrates progress in Southeast Asia
Intellasia East Asia News Indonesia has carried out democratic elections enormous in scale and importance, including for Americans. As usual currently, most of our media have ignored or only briefly noted this important news.
— Intellasia

Retailers start to open new outlets this year
Amid the rise of digital marketplaces, offline department stores have started to expand their businesses by opening new outlets in a number of cities.
— The Jakarta Post

Students in Indonesia speak up against sexual abuse and harassment on campus
The road was quiet with only palm trees around and it was only two of us in his car when he began to caress my thigh and slip his hand under my bottom.
— Straits Times (annoying popups)

Jakartans need days to clear mud after floods
South Jakartans are working hard to clear mud from their neighborhood after Friday’s floods.
— The Jakarta Post

Backstory: Hunting for fake news and trolls in Indonesia’s elections
The first online troll I met was a middle-aged, potbellied Indonesian man, dressed casually in jeans and sneakers. He said his nickname was “Commandant”.
— Reuters

200 Tons of Trash Removed from Kalibaru River
The Bogor District administration recently removed 200 tons worth of trash that piled up at the Kalibaru River, which is the tail end of the Ciliwung River in Bogor, West Java.
— Tempo.co

Jakarta to ensure food supply during Ramadan
The Jakarta administration has predicted that food demand will increase by 10 percent during Ramadan, which will begin next week, and has prepared measures to anticipate the surge.
— The Jakarta Post

Heavy rainfall to continue in Greater Jakarta until Thursday
Extreme weather with the potential to cause flooding and river overflows in Jakarta may continue to occur until Thursday, the Meteorology, Climatology and Geophysics Agency (BMKG) has predicted.
— The Jakarta Post

Jokowi Camp Predicts 60 Percent Parliamentary Control
The Indonesian parliament is expected to be solid with the government if Jokowi is named president in the 2019 presidential election vote recapitulation, considering the number of parliament seats will likely be secured by legislators joined in the “Indonesia working coalition” that is namely pro-Jokowi.
— Tempo.co

Indonesia detains Vietnamese fishermen after high seas clash
Indonesia’s navy said that the Vietnamese coastguard rammed one of its vessels off the coast of Borneo as it moved to intercept a boat suspected of fishing illegally in its waters.
— The Jakarta Post

Endangered eagle species found in Indonesia national park
A Javan-hawk eagle, a species of raptor on the brink of extinction, has been spotted nesting within the forest of Mount Gede Pangrango National Park (TNGPP) in West Java.
— Asia One

Indonesia-Vietnam urged to make rules in cases of conflict
Professor of International Law at the University of Indonesia (UI) Hikmahanto Juwana said there should be rules that the Indonesian and Vietnamese governments must follow in case of clashes.
— Antara News

Bogor Plastic Industries File Judicial Review on Plastic Ban
The plastic and plastic recycle industries in Bogor have lodged a judicial review at the Supreme Court (MA) on the Bogor mayor’s ban on plastic bags in the city.
— Tempo.co

Capital City Relocation Not Solution to Jakarta: Gov Anies
Jakarta Governor Anies Baswedan opined the prospect of the relocation of Indonesia’s capital would not solve Jakarta’s problems, including congestion. According to him, the largest contributor to congestion in the capital was not governmental activities.
— Tempo.co