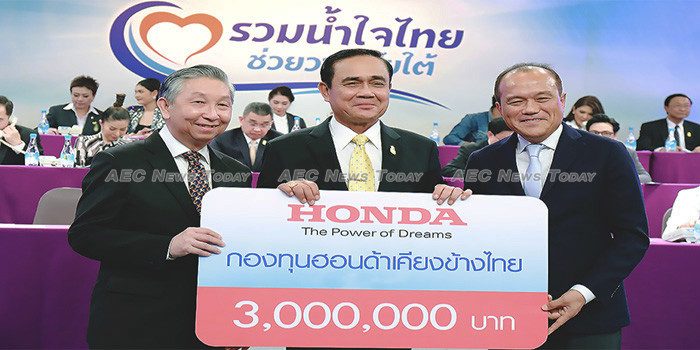 Honda Thailand Foundation’s (HTFs) Honda Khiang Khang Thai Fund (HKKT Fund) is a familiar site to the nations poor and minority rural dwellers, dispensing blankets and warm clothing ahead of the cold season, and pitching in at times of natural disaster.

In the wake of Tropical Storm Pabuk’, which cut a destructive path through parts of Southern Thailand last week killing seven people and causing more than Bt200 million (about US$6.247 mln in damage, the Foundation has been quick to step up to helping those most affected and least able to manage.

During a telethon on January 7 held to raise money for victims of the storm, HKKT Fund managing director Pitak Pruttisarikorn, and Voraphoch Phornprapha, representing the HTF, presented Prime Minister General Prayut Chan-o-cha with cheque for Bt3 million ($94,000) to assist those affected by the storm and in need.

Tropical Storm ‘Pabuk’ made landfall over Pak Phanang in the southern province of Nakhon Si Thammarat at 12.45pm local time on January 4, bringing with it winds of up to 70 kilometres (43.5 miles) per hour. To date, six people are reported to have died, with more than 30,000 residents in Nakhon Si Thammarat province alone evacuated to safe shelters.

More than 16,000 hectares (39,536 acres) of agricultural land owned by more than 137,000 producers were affected by floods, strong winds, and rain, while more than 2,000 factories were reportedly destroyed. In addition, more than 10,000 entrepreneurs, 95 per cent of who are SMEs, reported damage to property. Some 29 hospitals operated by the Ministry of Public Health (MoPH) suffered “severe damage”, while 435 schools reportedly suffered more than Bt110 million ($3.436 mln) damage

Money raised from the telethon is to be used to help restore normalcy to more than 212,700 households in 18 southern provinces.

Established in March, 2013, the HKKT Fund was established by the Honda Group of Companies in Thailand  — Honda Automobile (Thailand) Co., Ltd., A.P. Honda Co., Ltd., Thai Honda Manufacturing Co., Ltd., and Asian Honda Motor Co. Ltd.  — to provide assistance to Thais affected by natural disasters, those in need and to assist in societal development. A contribution is made to the fund from every Honda products sold in Thailand .

Since its establishment the HKKT Fund has provided Bt250 million ($7.8 mln) in support to people in 37 Thailand provinces, and has undertaken activities in four areas beneficial for people affected by natural disasters: provision of funds, contribution of materials, building a collaborative network, and enhancing knowledge for responding to natural disasters.

This article was last updated at 19:28 on January 9 to correct an error in the size of the donation