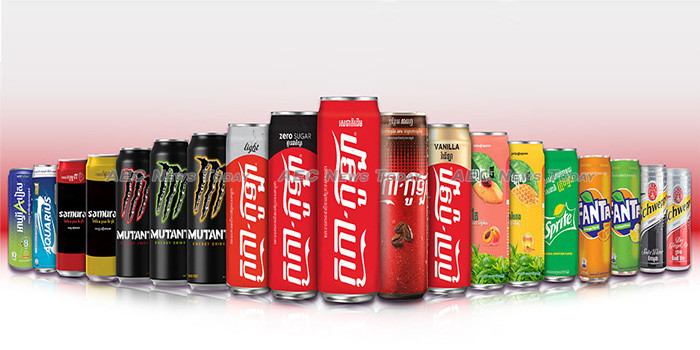 The Cambodian producers of Coca-Cola products have moved quickly to reassure its customers that its products are safe to consume following media reports that some of its lines had been found being counterfeited.

According to the July 11 edition of The Phnom Penh Post (The Post) ‘Coca-Cola, Fanta, 7-Up, and energy drink Samurai’ were among brands being counterfeited at a Kampong Thom mineral water factory raided by police and officers from the Interior Ministry’s Counter Counterfeit Committee (CCC) on Wednesday (July 10). However, it is fake news.

Ros Sophea, country legal and PAC director for Cambodia Beverage Company (CBC), told AEC News Today by email that the company has been working with Cambodian authorities since the raid was reported in The Post. “According to the current updates, no counterfeit bottles and cans of Coca-Cola products were produced at this factory as reported”

Mr Sopeha said CBC “manufactures its products following strict policies, requirements and specifications provided through an integrated quality management programme that measures all of our operations against the same global standards for production and distribution of our beverages”.

Reiterating that CBCs products are safe to consume, Mr Sopheahea said “the quality of our products and safety to consumers are always our top priority”.

In the original story The Post claimed ‘a raid led by provincial court prosecutor Ith Sothea, and deputy chief of the CCC, Kan Vathana, had found the popular brands being counterfeited for ‘national distribution’.

According to the report, ‘ the fake soft drinks were produced by adding flavourings, colourings and other ingredients to tap water. They were then placed in authentic-looking counterfeit bottles to be sold as the real thing’. A blurry photograph showed pallets of shrink-wrapped bottles inside a warehouse.

However, an article on Khmer language news website Cambodia Express News (CEN) displayed clearer photos showing a number of items allegedly seized by authorities. None had the appearance of being a Coca-Cola family product, while the article described the beverages as ‘fruit juices’.

While consumers can continue to enjoy Coca-Cola, Fanta, or 7Up without fears as to the safety or quality of the product, Cambodia consumers are left wondering exactly what brands they should avoid, with no statement having been issued by authorities.

Attempts to contact the Cambodia Ministry of Health on Friday (July 12) were unsuccessful, with the telephone going unanswered.

Update #2: This story was last updated at 10:42 local time on July 15, 2019 following the publication of this story The Post deleted its original story titled Fake Coke, Fanta factory shut down after raid. The original story can be found here courtesy of wayback machine.

An earlier update was made at 10:33 local time on July 13, 2019. In an article published on the Lookgooday news website late on July 12 Lim Phaon, owner of Lim Phorn Enterprise, the Kampong Thom mineral water factory raided by Cambodia authorities refuted claims the business was not correctly registered or was counterfeiting products. In the article he presents a full range of business registration and licence documents and says he intends to sue the Ministry of Interior and the Counter Counterfeit Committee (CCC) for defamation and damage to his brand.