• This story contains content that may be disturbing to some people 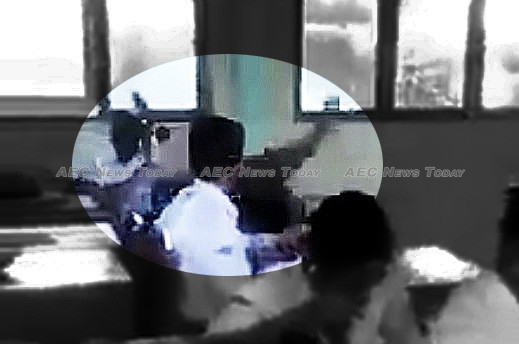 A video posted to a Thai Facebook page purporting to show a teacher in a Thai school beating the bejeebers out of a student has caused an uproar amongst Thai netizens and on various expat bulletin boards.

Enraged Thais and foreigners alike have pounced on the clip like a starving dog on a bone to launch a tirade of criticism against the Thai government and the Thai education system.

In the clip above what appears to be an adult male is seen striding across what appears to be a school classroom and launching a barrage of punches on what appears to be a student. Someone who intervenes is pushed into a corner and receives several punches to the stomach, before the attacker returns to his original victim, dragging him from his chair, sending a notebook flying through the air. The student is then pushed and shoved and can be seen to leave the room.

Viewed more than six million times in less than 23 hours of posting on the Thai Facebook page ‘Shotded’ with the caption ‘can teacher do this??’ written in Thai, the ‘teacher beating a student’ video has elicited more than 6,000 comments from Thais, been shared more 13,000 times and elicited some 17,000 reactions.

However, things are not always as they appear and this video only serves as a warning on how fake news is spread.

According to the police chief the participants in the incident were both aged about 15 or 16, with the fight occurring after one of the class ten students erased something from a blackboard before the other student had had the time to copy the material.

According to Merdeka.com, the police chief said the incident has already been handled internally at the school and reported to the Ministry of Education. “The problem is over”, he reportedly said, noting that “there was no teacher or teaching activity occurring in the room at the time of the fight.”

In the meantime, 24 hours after posting, the Thai fake news item is still racking up more than 500,000 views an hour, and hundreds of shares, likes, and reactions.