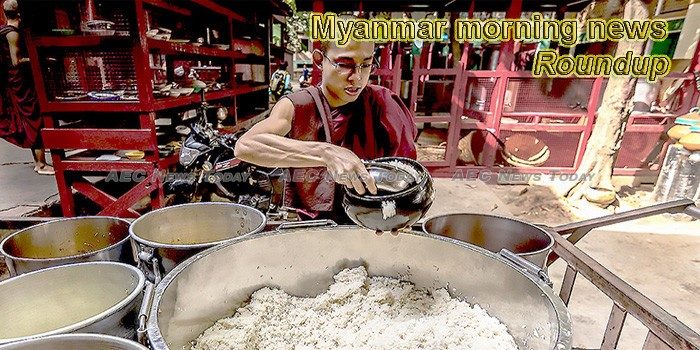 Govt draft roadmap to develop and support digital economy in Myanmar
Myanmar has released its official strategy for developing its digital economy over the next six years, according to the Ministry of Planning and Finance.
— Myanmar Times

Guangdong to support Myanmar in infrastructure, productivity
Guangdong province will cooperate with Myanmar to support the development of four sectors under the Belt and Road Initiative, Mr. Ouyang Weimin, Deputy State Administrator from Guangdong province government in China, said at the China-Myanmar Trade and Investment Forum held in Yangon on March 12.
— Myanmar Times

Myanmar land reform: Calls for new law to be scrapped
Rights groups are calling on Myanmar’s government to scrap a new land reform law they fear could leave millions of people with nowhere to call home.
— Aljazeera

New monster wreaks havoc in Shan State
Surrounded by the hills of eastern Shan State, Laukkai township is a tranquil settlement of mainly Han Chinese people who are considered one of the 135 ethnic groups in Myanmar.
— Myanmar Times

Myanmar military accused of abductions
The Myanmar military has been accused of detaining local aid workers and an ill man from Minbya township in Rakhine state on Tuesday night as the volunteers transported him to a hospital in Mrauk-U for treatment, RFA reported quoting relatives and residents of Kyaung Daung village.
— Mizzima

Myanmar’s black gold lures plucky oil drillers
As clouds of acrid, black smoke belched above the flames engulfing an artisanal oil field in central Myanmar, prospectors from nearby hillsides arrived in droves, hoping for riches from a fresh line of black gold.
— France24

Civilians trapped as Myanmar rebels squabble over expected China boom
With artillery exploding around her village in Myanmar’s northeast, 70-year-old Nan Nyunt fled to a monastery, one of thousands of civilians trapped between rebel groups who are fighting for influence as a China-driven economic boom looms.
— Dhaka Tribune

Thanaka: Myanmar’s ancient beauty secret
For thousands of years, people in Myanmar have been using thanaka to protect and care for their skin. But this ancient beauty habit is changing as the country opens up and modern make-up has become more available.
— BBC

Four countries including Myanmar have the highest potential risk of ASF: FAO
Food and Agriculture Organization (FAO) has declared Myanmar, Laos, Cambodia and Vietnam have the highest potential risk of African Swine Fever (ASF) virus due to the spreads of ASF in Yunnan Province in China which borders Myanmar, said Dr. Min Thein Maw, Director of Livestock Breeding and Veterinary Department.
— Eleven Myanmar

UN expert expresses grave concerns over land law
A UN expert has expressed grave concerns about the implementation of a new land law in Myanmar, affecting a third of the country, and the disastrous implications for traditional farming communities in ethnic minority regions, Ekklesia reported.
— Mizzima

Choose Myanmar as Your Next Travel Destination
Your next travel destination should be one that takes you out of the ordinary and fills you and your travel companions with many wondrous memories. Vacations that involve sunbathing on the beach day after day can get monotonous, leaving very little distinction in your mind between the places you have visited. If you want a holiday which will leave you with many pleasantly distinctive memories, Myanmar should be your next travel destination.
— Thrive Global

Letter: Fuel provision elephant in the room for airlines
Complaints on high domestic airfares – many domestic flights are more costly than flights to Bangkok, Hanoi or Kuala Lumpur – and how it is hurting Myanmar’s tourism are gaining traction these days, with recent high-profile intervention from stakeholders in the hospitality sector.
— Myanmar Times

Bangladesh to move refugees to island next month: minister
Bangladesh said Wednesday it would start relocating tens of thousands of Rohingya Muslims from overcrowded camps to a remote island vulnerable to extreme weather, despite the plan attracting considerable controversy.
— Mizzima

Myanmar Passes Patent Law
Pyidaungsu Hluttaw Law No. 7/2019—Myanmar’s Patent Law—was enacted on March 11, 2019, providing a framework for the protection of inventions related to products and processes. This is the first legislation specifically addressing the protection of patents in the history of Myanmar.
— Lexology

Huawei Myanmar to keep eye on 5G prize
Guo Ping, chair of the company, wrote in an opinion piece in the Financial Times on February 27, “The Americans have charged us with stealing technology and violating trade sanctions and largely blocked us from doing business there.”
— Myanmar Times

India Deploys the Army to Check Rebel, Refugee Influx From Myanmar
The escalation of conflict in the Myanmar’s disturbed Rakhine state has triggered the deployment of additional troops by India along the international border to thwart attempts by rebels and refugees to sneak into the country.
— The Diplomat

Tanintharyi corruption case draws light on project management
The charging and removal of a high level government official for corruption in Tanintharyi has roused concerns over how regional projects will be governed and run in the future.
— Myanmar Times

Myanmar’s Leader Urges ‘Broad-minded’ Look at Chinese Dam And Other Big Projects
In rare public comments about a controversial Chinese dam project, Myanmar State Counselor Aung San Su Kyi said Thursday that is important for her government to uphold investment projects approved by previous administrations, or risk being perceived by investors as “not reliable and volatile.”
— Radio Free Asia

Myanmar Times celebrates 1000th edition
The 1000th edition is printed on March 14, 2019, soon after the paper’s Twitter account – with the Twitter handle @TheMyanmarTimes – attracted more than 400,000 followers. Both milestones consolidate the paper’s position as the leading print and digital media outlet in the country.
— Myanmar Times