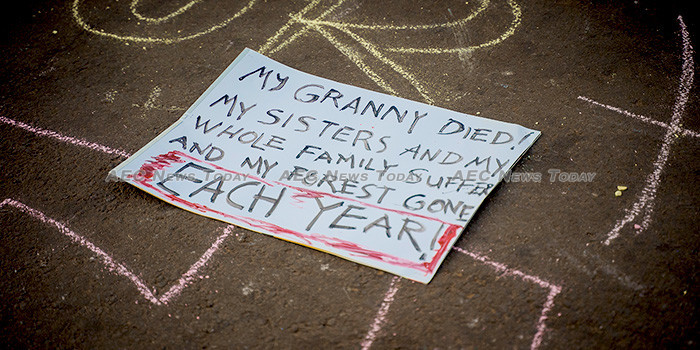 Youth and citizens of one of the world’s most at risk nations, Kiribati (pronounced khi-ra-bus), yesterday (Sep 20) heralded in #Climatestrike 2019, a global day of protest by the world’s students against the current climate crisis and the lack of action by world leaders and heads of industry to reign in global heating.

Comprising 32 atolls spread over an area as large as India, South Tarawa, capital of the Republic of Kiribati, sits just 3 meters above sea level at its highest point.

It is so at risk of submersion in the next 25-years that in 2015 former president Anote Tong bought 2,000 hectares (about 4,942 acres) of land in Fiji for the country’s entire population of almost 120,000 to relocate to.

Kiribati is not disappearing under the waves without a fight as demonstrated in the video at the right taken as #Climatestrike 2019 began. Across the Pacific so-called ‘Pacific Climate Warriors’ repeated the same message in Tonga, Tuvalu, Tokelau, Kiribati, Fiji, Vanuatu, New Caledonia, and the Solomon Islands.

Hot on the heals of the Pacific island nations was New Zealand and then Australia, where an estimated 300,000 people turned out to voice their concern at the deteriorating world environment.

From there it was Asean’s turn with students, parents, and concerned citizens taking to the streets in Indonesia, the Philippines, Malaysia, and Thailand.

In the UK more than 300,000 people attended some 200 #Climatestrike events nationally making it the largest environmental protest the UK has seen.

In the USA some 300,000 people attended a #Climatestrike rally in New York where the person who inspired the global protest, 16-year-old Swedish activist Greta Thunberg, spoke.

“Right now we are the ones who are making a difference. If no one else will take action, then we will, she said, adding “if you belong to that small group of people who feel threatened by us, then we have some very bad news for you. Because this is only the beginning. Change is coming whether they like it or not”.

It has been estimated that more than four million people took part in #Climatestrike events yesterday, sending a message that governments and industrialists globally will ignore at their own peril.

While there is no single #climatestrike spokesperson, the calls of those participating yesterday are universally similar and include things such as the implementation of sustainable agriculture; the protection of indigenous lands and waterways; a ban on new coal, oil, and gas projects; the use of 100 per cent renewable energy; and the holding of “fossil fuel billionaires” most responsible for climate damage accountable for their destruction.

On Monday UN Secretary-General Antonio Guterres will host an emergency Climate Action Summit at which he will urge world leaders to raise their commitments made in the 2015 Paris climate accord.

A scientific report from the Intergovernmental Panel on Climate Change (IPCC) to be unveiled in Morocco next Freiday (Sep 27) is expected to warn that global warming and pollution are ravaging Earth’s oceans and icy regions in ways that could unleash misery on a global scale.