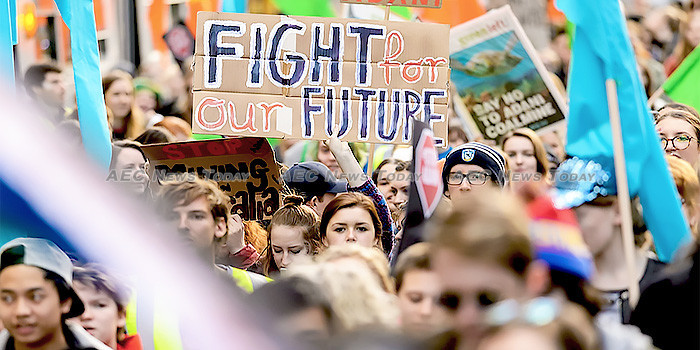 School students from across the world will rally tomorrow (Sept 20) to protest the deplorable state of the world’s environment and the poor job that world leaders and heads of industry are doing to reign-in the current climate crisis.

Due to the international date line it will be students in some of the countries most affected by global heating who will herald in #Climatestrike 2019, a global call to action by world’s school students.

Across the Pacific #climatestrike events have been organised in independent island nations such as Tonga, Tuvalu, Tokelau, Kiribati, Fiji, Vanuatu, New Caledonia, the Solomon Islands, and from end of New Zealand to the other.

From there the tsunami of outrage over global heating and climate change hits the shores of Australia where hundreds of #climatestrike events have been organised (See here: School Strike 4 Climate)

As the sun moves west it will be students in Kupang, West Timor Indonesia introducing Asean climate change anger to the world, followed next by those in Waikabubak, East Nusa Tengarra.

#Climatestrike 2019 events in all Asean capitals

From there the rays of the rising sun fall across the Asean heartland where #Climatestrike events have been organised in every capital, and many provincial cities, villages, and towns as citizens become increasingly aware of the crisis that is upon us.

Inspired by 16-year-old Swedish activist Greta Thunberg, who gained notoriety promoting school strikes among students concerned by climate change, the global #Climatestrike call to action is being held three days ahead of a crucial Climate Action Summit at the United Nations (UN) headquarters in New York on September 23.

According to 350.org, a non-profit dedicated to climate change awareness, more than 4,482 #Climatestrike events have been registered in over 132 countries.

In the US more than 800 events have been registered with New York City public schools excusing students who are absent due to attending a #Climatestrike event (with parental consent).

That the world’s climate is in crisis is beyond dispute. The science is in and is irrefutable. The effects are obvious. From toxic air to the almost daily occurrence of dead marine life washing ashore, their stomachs and intestines stuffed full of indigestible plastic, the climate crisis is obvious and real. To deny it is to deny science.

That those who will inherit the Earth from the current generation are concerned, nay, angry, is appropriate. Their parents’ generation and that of their parents have failed them.

Corruption, greed, lax enforcement, and those putting their own personal wealth and well-being above everyone else has brought us to the point where rivers don’t flow and are chocked with plastic, while microplastic is found in Arctic ice and the bodies of fish off the coast of Southern Thailand. ‘Climate crisis’ is without a doubt the appropriate phrase.

Earlier this week UN Secretary-General, Antonio Guterres, said that the world was “losing the race” to avert climate disaster.

Speaking in Washington ahead of next week’s summit, Mr Gutterres said: “What I want is to have the whole of society putting pressure on governments to make governments understand they need to run faster, because we are losing the race”, adding, “What the science tells us today is that these targets are still reachable”.

This year’s #Climatestrike 2019 builds on the momentum of the global student climate strike organised last year by Ms Thunberg which saw more than 17,000 students in 24 countries participate. Since then climate strike events have been held in cities throughout the world.

From the obscurity one would expect of a normal 16-year-old Ms Thunbergand and the movement she has inspired are now recognised globally as a significant voice in the environment debate. So much so that in March Ms Thunberg was nominated for a Nobel Peace Prize, while in May Time Magazine named her one of the world’s most influential people in the world, featuring her on its cover.

Among the demands of the world’s students (there is no single spokesperson) is the implementation of sustainable agriculture; the protection of indigenous lands and waterways; a ban on new coal, oil, and gas projects; the use of 100 per cent renewable energy; and the holding of “fossil fuel billionaires” most responsible for climate destruction accountable for their damage.

How to join a #climatestrike event

It is not just school students who will be taking part in #Climatestrike 2019. Individuals of any age are encouraged to participate. More than 900 Amazon employees in the US have vowed to support their local students.

If you are concerned by the rapidly deteriorating condition of the world’s environment and want to participate in #Climatestrike 2019, but don’t know where or how, help is just a mouse click away.

US-based non-profit global activism group Avaaz have built a handy #Climatestrike map with details of events already organised, or the ability for you to organise your own.