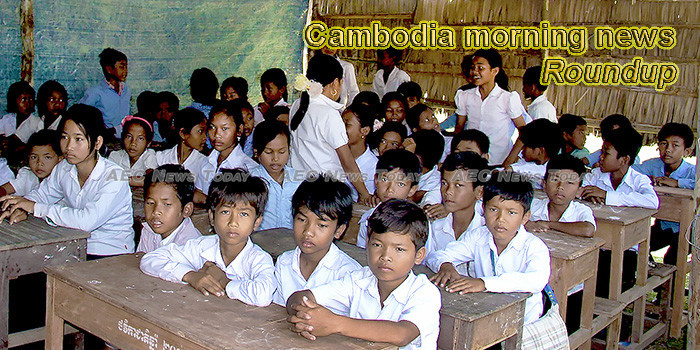 $49 mln ADB package to boost rural hygiene for 400,000 in Cambodia
A $49 million financing package from the the Asian Development Bank (ADB) will help the Cambodia Government in achieving its 2025 goal of providing universal access to improved water supply and sanitation services in the country’s rural areas.
— AEC News Today

CoM: Rainsy has crossed ‘red line of democracy’
The Council of Ministers’ Press and Quick Reaction Unit (Press OCM) on Tuesday released a video calling Sam Rainsy a second Lon Nol and accusing him of having “crossed the red line of democracy”.
— The Phnom Penh Post

US embassy debunks Rainsy’s West Point claim
Amid a dispute between Army Commander Lieutenant General Hun Manet and Sam Rainsy over the authenticity of the former’s West Point credentials, the United States embassy yesterday clarified US universities do not factor in a student’s country of origin before granting degrees.
— Khmer Times

Japan grants millions in aid
Foreign Affairs Minister Prak Sokhonn yesterday revealed that Japan has given nearly $80 million in aid so far this year toward infrastructure and socio-economic projects in the Kingdom.
— Khmer Times

Cambodia’s rice export to China up 44 pct in 9 months
Cambodia had exported 157,793 tons of milled rice to China during the first nine months of 2019, up 44 percent over the same period last year, said an official report on Thursday.
— Xinhua

PM to iron out border with Vietnam
Prime Minister Hun Sen yesterday vowed to address solutions to an ongoing dispute over the remaining 16 percent of the Cambodia and Vietnam border, yet to be demarcated, with his Vietnamese counterpart during his visit to Hanoi this weekend.
— Khmer Times

Water Festival still on despite coup threat
Prime Minister Hun Sen yesterday said that the three-day Water Festival will be celebrated as planned despite Sam Rainsy’s threats to gather millions of people in Phnom Penh to unseat the government.
— Khmer Times

H.E. Sik Bunhok: NEC is Independent
National Election Committee (NEC) is a state’s independent entity implementing works in accordance to the country’s constitution, and without partiality to political parties.
— AKP

Making Cambodia’s Tourism Strategy Vigilant
Tourism Marketing and Promotion Board has discussed further adjustment of Cambodia’s tourism strategy to be vigilant to the happening trade war between China and the U.S.
— AKP

Rattanakiri’s Criminal Deputy Chief Shot Dead, Personal Issue
A police officer Phon Tum, serving as deputy chief of Ratanakkiri’s criminal division, has been shot dead at about 9 a.m on 3 October 2019 in a cafe restaurant located in the city of Banlung, Ratanakiri province in the northeast of Cambodia bordering Vietnam.
— Fresh News

Situation Report No. 3 – Floods in Cambodia (As of 2 October 2019)
Since early September, Cambodia has experienced flooding along the Mekong River Basin and around the Tonle Sap Lake, which was triggered by heavy rainfall.
— Relief Web

Cambodian PM fires arrest warning to fans of his arch-rival
Cambodia’s premier Hun Sen on Wednesday threatened to arrest supporters of his nemesis Sam Rainsy if they mobilise for the opposition figurehead’s much-trumpeted return from self-exile next month.
— Yahoo News

Government delivers $5 million in childbirth bonuses
The government has spent more than $5 million to support female garment workers who delivered babies during the first nine months of the year.
— Khmer Times

ICE arrests two Cambodians in SF as advocates protest deportations
About 50 community advocates and Cambodians rallied at ICE headquarters in San Francisco Thursday, joining groups across the nation to protest the ongoing arrests of refugees who fled the country decades ago.
— San Francisco Chronicle