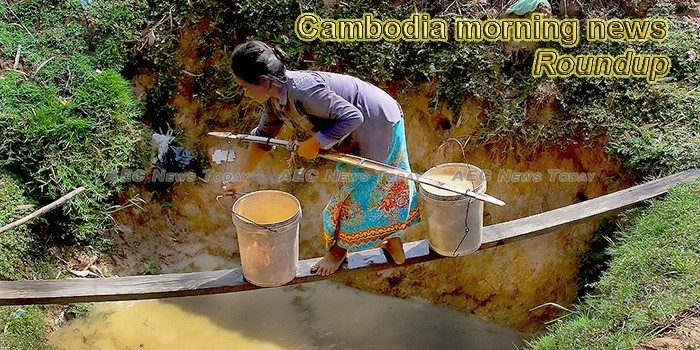 Cambodia: the case for freeing Kem Sokha
Cambodian Prime Minister Hun Sen hinted this week that he may not offer a royal pardon to detained opposition leader Kem Sokha, who marked 18 months in pre-trial detention on March 3 on what many see as spurious treason charges.
— Asia Times

Why the EU should try to understand Cambodia
The European Union (EU) and Cambodia are now engaged in what can be seen as a tug of war for influence and sovereignty, respectively. Despite unequal power relations, both sides are apparently trying to strengthen their stances against one another.
— Khmer Times

Cambodia trade push sharpened
Pisit said yesterday that the opening of the bank’s representative office, after it received a business licence from the National Bank of Cambodia in January, is in line with Exim Thailand’s strategy to connect Thailand to the world through trade and investment.
— The Nation (annoying popups)

City Hall bans public pro-women rallies
As NGOs prepare to rally during the upcoming International Women’s Rights Day, City Hall yesterday reiterated its stance prohibiting any demonstrations to be carried out in public so that order can be maintained.
— Khmer Times

Vietnam, Cambodia forge cooperation in communications
he Voice of Vietnam (VOV), the national radio broadcaster, wants to coordinate with the Cambodian Ministry of Information to launch a new channel presented in multiple languages, including Vietnamese, VOV Deputy Director Vu Hai has said.
— Vietnam Plus

Boys still vulnerable to sexual abuse
New research conducted by First Step Cambodia has shown that parents and government authorities still have little awareness of how to prevent boys from being victims of sexual abuse, despite a previous study which found that more boys than girls suffer sexual exploitation.
— The Phnom Penh Post

PM Hun Sen to Meet Local Artists until He Lost Premiership (Video inside)
Speaking at the 21st National Culture Day on Wednesday at Koh Pich, Prime Minister Hun Sen announced that he will continue to meet local artists until he no longer be Prime Minister.
— Fresh News

RCAF prepares to address expected water shortages
The Defence Ministry is preparing 300 soldiers, 100 water trucks and 30 water pumps to be deployed in order to address shortages of water during the dry season.
— Khmer Times

France Grants US$13 Million to Continue Agricultural Project in Cambodia
France has committed an amount of US$13 million to continue water resource management and agricultural change programme in Cambodia, according to the Ministry of Economy and Finance.
— Agence Kampuchea Presse

Cambodia and Laos Border Crime Cooperation
Cambodia and Laos on Tuesday signed an annual memorandum of understanding on cooperation in combating drugs and transnational crimes, a spokesman confirmed with Xinhua on Wednesday.
— Cambodia News English

PM says film industry to be tax-free until 2023
Prime Minister Hun Sen said on Wednesday that the government will not tax the Cambodian film industry until at least 2023, and even until 2028 should he be elected the Kingdom’s next leader.
— The Phnom Penh Post

Japan Grants 100 Million Yen for Disaster Prevention
On March 6, a grant for “Better Living Supporting Projects and Building a Capacity for Disaster Prevention in Cambodia” worth 100 million yen (approximately US $ 882,000) was signed by Mr. Ambassador Horori Nhugi and Sok Vanna, President of the United Nations Program for Humanitarian Residence in Cambodia, with Mr. Chea Sophara, Deputy Prime Minister State Minister of Land Management, Urban Planning and Construction as a witness.
— Cambodia News English

NEC to start party, candidate registrations for elections
The National Election Committee (NEC) is to start accepting regist-rations for political parties and candidates from March 7-11 in preparation for the upcoming municipal, provincial, town, district and commune council elections on Sunday, May 26.
— The Phnom Penh Post

Royal Group to move forward with energy project
The Royal Group of Cambodia and partners China Southern Power Grid and China Huaneng Group on Tuesday said they will continue work on a project to build high voltage transmission lines in the Kingdom.
— Khmer Times

Policeman sued over nepotism charges
Tun Kuntha, chief of Chakry International Check Point in Prey Veng province and his wife Thoeun Channy, a teacher at Panha Khetaram primary school, are selling their land and home to pay off villagers after 10 families sued, accusing them of cheating them out of between $3,000 and $6,000 each to get their sons jobs as policemen.
— The Phnom Penh Post

PM Hun Sen tells of marital separation in the ‘Time of War’
Prime Minister Hun Sen has spoken of falling in love and marrying his wife Bun Rany, and of their forced separation in 1976, against the backdrop of the murderous Khmer Rouge.
— The Phnom Penh Post

PP head-on lorry collision kills three and seriously injures two
Three people were killed and two severely injured in a head-on collision on Wednesday morning between a car and a lorry carrying piles of iron rods in the capital’s Kantaok commune in Por Sen Chey district.
— The Phnom Penh Post