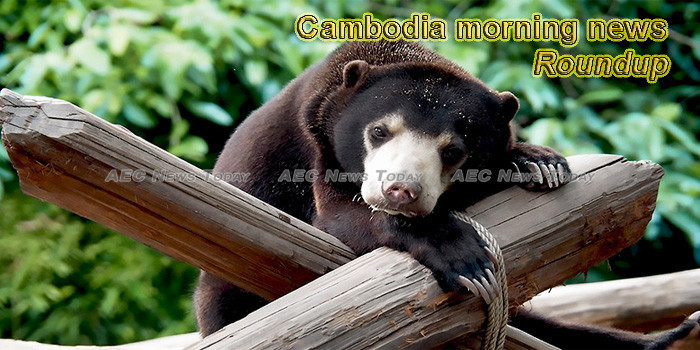 Foreign money mules nabbed at Siem Reap airport with $2.2 million
Two South Korean nationals were arrested on Sunday for trying to bring a total of $2.2 million in cash into the Kingdom without proper provenance for the money.
— Khmer Times

Illegal building sites to have power cut
The government is to act against illegal construction sites nationwide by cutting off their electricity and water and halting the supply of materials.
— The Phnom Penh Post

Ministry to team up with Swiss institute to upskill workers
The Ministry of Tourism on Friday announced plans to work with Switzerland-based Waikato Institute of Technology (Wintec) to establish an online platform with courses in tourism.
— Khmer Times

African Swine Fever Spreads to Cambodia’s Svay Rieng and Takeo
African swine fever has continued to spread to Svay Rieng and Takeo provinces of Cambodia, Tan Phanara, the director of the Animal Health and Production department within the Ministry of Agriculture, Forestry and Fisheries, told Fresh News on Monday.
— AKP

Khmer Transliteration Font Converter Being Developed
Royal Academy of Cambodia is working on Khmer transliteration font converter app – a move that will simplify the learning of the Kingdom into the past.
— AKP

Rice exports up 3.7 percent in first six months of the year
Cambodia exported 281,538 tonnes of milled rice during the first half of the year, an increase of 3.7 percent compared to the same period last year.
— Khmer Times

Kingdom accepts UN rights proposals
The government has decided to accept 173 out of 198 recommendations made by 73 UN member states during the Kingdom’s third Universal Period Review.
— Khmer Times

Sar Kheng issues police professionalism guidance
Deputy Prime Minister Sar Kheng on Friday issued a 10-point guidance plan to all police officials on the “management and use of the National Police’s administrative frameworks” to maintain their dignity, morality and professionalism in executing their roles.
— The Phnom Penh Post

Nearly US$3 Billion Riels Allocated for Sports Development This Year
The Ministry of Education, Youth and Sports (MoEYS) has allocated this year nearly 3 billion Riel (about US$750,000) to more than 40 national sports federations in order to develop the sports sector, both in terms of quantity and quality, in preparation for the SEA Games 2023 to be hosted by Cambodia.
— AKP

Discussing the ASF virus with pig raisers association
Cases of the African swine flu (ASF) virus have been reported in several areas around the country, and Cambodian raisers are concerned about the spread of the virus. Khmer Times’ Chea Vannak discusses the situation with Srun Pov, president of the Cambodian Pig Raiser Association.
— Khmer Times

Cambodia, Thailand: Journey to Achieve Ambitious Bilateral Trade Target
Cambodia’s membership of ASEAN has contributed remarkably to bilateral trade and investment between the Kingdom and neighbouring Thailand, with ongoing joint commitment to forge new trade volume target of US$15 billion by 2020.
— AKP

France Continues to Support Training of Cambodian UN Peacekeepers
French Republic has reiterated its continuous support for Cambodia, especially in human resource development for the National Centre for Peacekeeping Forces, Mine and Explosive Remnants of War Clearance (NPMEC).
— AKP

Authorities to intensify crackdowns on drug crimes in nightclubs, KTVs
The Ministry of Tourism has called on all provincial tourism departments to work together with anti-drug police to crack down on drug use and trafficking in nightclubs and KTV outlets.
— Khmer Times

Ministry opposes EU Rainsy backing
The Ministry of Foreign Affairs and International Cooperation has expressed its strong disapproval of a plan by EU parliamentarians to escort Sam Rainsy, the “acting president” of the Supreme Court-dissolved Cambodia National Rescue Party (CNRP), to the Kingdom.
— The Phnom Penh Post

New Zealand to Help Develop Cambodia’s Tourism Human Resources
New Zealand will further strengthen cooperation with Cambodia in tourism, especially in assisting the National Institute of Tourism to develop the Kingdom’s human resources for the industry, according to local media report.
— AKP

Two Groups of Cambodian Villagers Protest Over Land Disputes
Villagers embroiled in two separate land disputes in Cambodia’s Koh Kong province protested Monday, demanding solutions for their respective cases, one against a home-grown tycoon, the other against a Chinese developer.
— RFA

Husband murders family, commits suicide in house blaze
A family of three was killed in a fire in Siem Reap province’s Puok district yesterday when the husband reportedly ignited the inferno to kill his wife and son together with him, police said.
— Khmer Times

Politics matters to deliver reforms
Last week, Prime Minister Hun Sen said that the withdrawal of the Kingdom’s access to EU’s Everything But Arms (EBA) preferential trade scheme is not a big concern.
— Khmer Times

Hun Sen in Singapore for shoulder treatment
Prime Minister Hun Sen is recovering in Singapore after medical treatment on his shoulder.
— Khmer Times

Swedish Senior Statistician received award from Cambodia
Veronica Wikner, a Swedish Statistics Senior Advisor from National Institute of Statistics of Cambodia (NIS) was recently given an honored award by the Government of Cambodia for her contributions to the NIS over the past three years.
— ScandAsia

Friends to mark day of Kem Ley’s murder
Former friends and students of slain political analyst Kem Ley will mark the third anniversary of his death by honouring him at the gas station where he was gunned down despite a warning not to do so by City Hall.
— Khmer Times

Forestry official who killed students agrees $30K compensation
Choam Ksan district Forestry Administration chief, Kim Chet Thavy, who allegedly failed to stop his vehicle after killing three students in a traffic accident on June 22, has agreed to pay $10,000 to each of the victims’ families in return for them withdrawing their lawsuits from the provincial court.
— The Phnom Penh Post

Photos of Cambodia Among Selected Entries of Pride of ASEAN Contest
Among 53 best photo entries for the on-going Pride of ASEAN photo contest organised by Thailand, three are about Cambodia.
— AKP