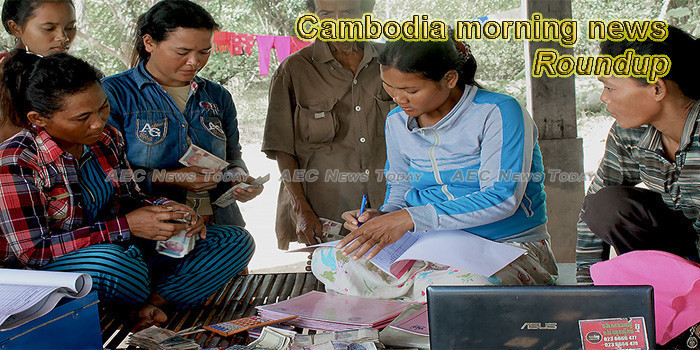 No Taxes on Farmlands and from Minimum Wage Workers If CPP Leads, Says PM Hun Sen
As long as Cambodian People’s Party (CPP) continues to win the elections, the Royal Government will not charge any taxes on farmland and from minimum wage workers, Prime Minister Hun Sen said in a meeting with Cambodian students in Hungary on 14 October 2019.
— Fresh News

More than 10,000 factory workers resume work after compromise
More than 10,000 workers of Taieasy International Co Ltd’s factory in Krakor district, in Pursat province agreed on Tuesday to return to work after provincial governor Mao Thonin made a compromise.
— The Phnom Penh Post

Cambodia to purchase military aircrafts from the Czech Republic
“In the past, Cambodia purchased six L-39 jets,” said Hun Sen. “I discussed Cambodia’s capacity for buying three or four new L-39 jets and we continue to discuss this.” The Aero L-39 Albatros is a high-performance jet trainer known as a military trainer aircraft as well as a light-ground attack aircraft.
— Themy Themy

Crackdown in Cambodia Ahead of Planned Return of Opposition Leader
Cambodian authorities have launched a crackdown on activists in a move observers say is an attempt to intimidate opposition supporters ahead of the planned, but uncertain return next month from self-exile of Sam Rainsy, the acting head of the now-dissolved opposition Cambodia National Rescue Party, and other opposition leaders.
— VOA

During Hun Sen Visit, Czech Premier Says Rights Are His Foreign Policy Priority
Amid a review of possible trade sanctions against his country, Prime Minister Hun Sen said he hoped to be “treated fairly” by Europe, while Czech premier Andrej Babis emphasized that human rights and democracy were his nation’s foreign policy priority.
— VOD

Cambodia Marks the 7th Anniversary of King Norodom Sihanouk’s Death
Prime Minister Hun Sen Tuesday said that, although he was gone, people throughout the country would never forget that King Sihanouk had negotiated and proclaimed the country’s independence from France on Nov. 9, 1953.
— Themy Themy

ADB book on Asean launched in Cambodia
Cambodia became the latest country in Southeast Asia to host the launching of a new book about the Association of Southeast Asian Nations (Asean).
— Khmer Times

Cambodia steps up opposition crackdown as Rainsy return nears
Authorities in Cambodia have labelled opposition leader Sam Rainsy’s plan to return next month from exile a “coup”, and stepped up a crackdown on his supporters.
— Aljazeera

De Anza nursing graduates give aid in Cambodia
Flying from California to Cambodia, De Anza College nursing graduate Emily Miller had no idea what she was about to face.
— La Voz News

Cambodia boosts bilateral trade with Vietnam by improving infrastructure
The Cambodian government has recently called for efforts to improve the country’s infrastructure, including the revision and actioning of plans to push ahead with the Phnom Penh-Bavet expressway project, a move expected to boost business, investments, and trade with Vietnam.
— Khmer Times

Cambodia’s PM Hun Sen Thanks Czech for Continued Support in the Framework of EU (Video inside)
Cambodian Prime Minister Hun Sen thanked the Czech Government for their continued support on Cambodia within the EU framework, addressing at the joint press conference with Czech Prime Minister Andrej Babis on 14 October 2019.
— Fresh News

Sao Sokha’s defection to KNLF fake news
The National Military Police yesterday warned that it will take legal action against those who spread fake news that its commander General Sao Sokha and other senior Royal Cambodian Armed Forces commanders have joined a terrorist organisation.
— Khmer Times

Cambodia, Czech Republic Laud Bilateral Cooperation in All Domains
Samdech Akka Moha Sena Padei Techo Hun Sen, Prime Minister of the Kingdom of Cambodia, and H.E. Jaroslav Kubera, President of the Senate of the Czech Republic, have spoken highly of the bilateral cooperation between the two countries in all sectors as well as between the two legislative and executive bodies.
— AKP

Defense minister orders army to be on lookout for rebels
“What’s happening now requires serious and sufficient actions to be taken at all destinations,” he said.
— Themy Themy

Sihanoukville Toy Granade Scare
Citizens reported that two bombs were placed on a rubbish bin in Sangkat 4, Sihanoukville, on the afternoon on 14 October 2019.
— CNE

Deadly Explosion and Fire Poipet
Poipet: Reports say that around midnight, a fire broke out in Poipet, near the Chinese school, causing severe damage.
— CNE

Homeless Australian Taken By Immigration
On October 14, 2019 at 10:00 AM, Immigration received one foreigner from the police station in the Teuk Mla 3 administration office in Phnom Penh.
— CNE

PM Hun Sen Pledges to Protect His Majesty King and Queen Mother on the 7th Anniversary of the Passing of King Father
Prime Minister Hun Sen pledged to protect Cambodian King and Queen Mother and ensure the kingdom’s peace and sustainable development on the occasion of the 7th anniversary of the passing of the Late King Father of Cambodia, King Norodom Sihanouk.
— Fresh News

Cambodian-Lao coal power deal an environmental worry
With plans for cross-border electricity grids growing in the region, Laos is banking on hydropower exports to earn revenue. But a recent deal to also sell coal power generated in Laos to Cambodia has sparked environmental concerns over this trade.
— The Phnom Penh Post

Generating test runs at Laos’ Don Sahong dam near Cambodia border
Tests were run last week on the first of four electricity generators at the Don Sahong hydropower plant on the Mekong River in Laos’ Champasak province, after construction began in January 2016.
— The Phnom Penh Post

Rice seeds provided to farmers
The government has provided more than 1,000 tonnes of rice seeds for people affected by flood and drought to help them restore their livelihood. The aid was given through the Ministry of Agriculture, Forestry and Fisheries and the National Committee for Disaster Management (NCDM).
— The Phnom Penh Post

Four foreigners to be sent to court for theft in P Sihanouk province
The Preah Sihanouk provincial police will send four Chinese nationals to the provincial court on Wednesday after they were arrested in Sihanoukville on Sunday for separate attempted thefts of a motorbike and $1,700 in cash.
— The Phnom Penh Post

Law enforcement awareness raised in S’ville
The Ministry of Justice and Preah Sihanouk provincial court on Tuesday organised a meeting to disseminate information on the “duty and obligation of law enforcement institution as well as law enforcement by force”.
— The Phnom Penh Post

Police look for driver in Poipet town fatal crash investigation
At least one person was killed, two others seriously injured and 12 shops caught fire after a car collided with a motorcycle and then struck a row of shops in Poipet town’s Phsar Kandal commune in Banteay Meanchey province on Tuesday.
— The Phnom Penh Post

Woman charged over $70,000 debt
Phnom Penh Municipal Court yesterday charged a woman who allegedly cheated a money lender out of more than $70,000 by refusing to repay a loan taken in 2017.
— Khmer Times

Philippine army vows to boost ties with RCAF
The Philippine army has promised to boost cooperation with the Royal Cambodian Armed Forces, especially in training and sharing information.
— Khmer Times

Czech arms to be purchased
Prime Minister Hun Sen has announced that the government will purchase more Czech-made surveillance aircraft and weapons in a move to strengthen the Kingdom’s defence and national security.
— Khmer Times

Woman dies in gas tank explosion in Banteay Meanchey
A noodle vendor was killed on Monday night in a gas explosion while two others sustained critical injuries after a speeding car smashed into a row of streetside gas vendors in Banteay Meanchey province’s Poipet city.
— Khmer Times

Families compensated over workers’ deaths
The families of three construction workers who died after plummeting 16-storeys on Saturday in Daun Penh district received $3,000 each on Monday.
— Khmer Times

Arrest warrant issued against ex-commune chief
Siem Reap provincial court on Monday issued an arrest warrant against a former CNRP commune chief for allegedly conspiring with Sam Rainsy to stage a coup during his planned return to the Kingdom on November 9.
— Khmer Times

Hungarian President Asks PM Hun Sen’s Permission to Use the Words “White Gold” to Refer to Water
Addressing the 3rd Water Summit in Budapest, Hungary, on 15 October 2019, Cambodian Prime Minister Hun Sen has used the word “white gold” to refer to “water”, which caught the attention of many leaders.
— Fresh News