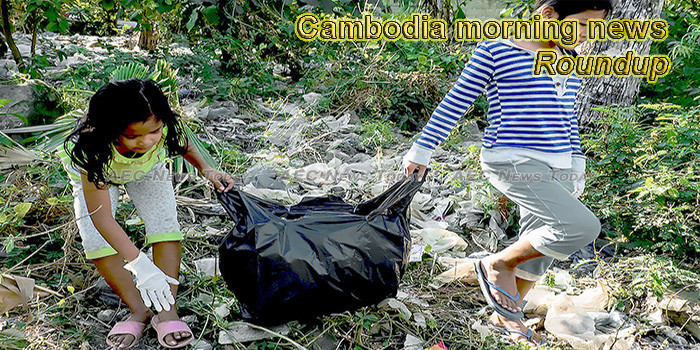 Chinese own more than 90% of S’ville businesses, says report
Chinese nationals own more than 90 per cent of the businesses in Preah Sihanouk province leaving many citizens grasping with the challenge of adjusting to the influx of Mainlanders and changes to a once sleepy coastal province.
— The Phnom Penh Post

Teacher training announced
The Ministry of Education, Youth and Sports announced that 1,000 teachers will be selected to undergo training for the academic year 2019-2020 at the National Institute of Education starting early November.
— The Phnom Penh Post

NGOs call for push on domestic violence
While the majority of respondents to a survey said they felt gender-based and domestic violence was decreasing, NGOs have recommended greater effort in ending the normalisation of such violence and any culture of impunity for offenders.
— The Phnom Penh Post

Low Pressure to Bring Rainfalls in Cambodia
Active low pressure happening in South China Sea next to Hainan Island is predicted to bring rainfalls in Upper Mekong River basin and other areas in Cambodia.
— AKP

NSSF provides benefits to more than 102,000 new mothers
The government has spent more than $10 million in benefits for female workers who delivered babies throughout the first six months of this year.
— Khmer Times

U.S. Urges Cambodian Neutrality As Speculation of Chinese Military Presence Grows
The U.S. embassy on Tuesday urged the Cambodian government to defend its “neutral policy” as it expressed concerns about a possible Chinese military presence on Cambodia’s coast.
— VOA Khmer

Cambodia, China sign deal on securities cooperation
The regulator of the Cambodian securities market has signed a cooperation agreement with its Chinese counterpart.
— Khmer Times

Does Cambodia’s Opposition Finally Have a Winning Comeback Plan?
Despite the hand-wringing over the current impasse in Cambodian politics, only two major events are likely to definitively change the dynamics at play fundamentally.
— The Diplomat

American Tech Companies Grow Cambodia’s Digital Economy
From ICT sector professionals to the general Cambodian public, it has been no secret that the tech sector in Cambodia has been booming in recent years, especially in the capital of Phnom Penh. With its place in the heart of Southeast Asia, fast internet connectivity and a young, digitally savvy population, Cambodia is poised for rapid growth in the digital economy.
— Khmer Times

Cambodia Throws a Wrench into Trump’s Trade War
The US Department of Homeland Security has fined several companies for evading President Donald Trump’s tariffs on imports from China by rerouting them through Cambodia’s Sihanoukville Special Economic Zone.
— Project Syndicate

Cambodia set for Homeless World Cup
A team of eight football players will leave for the United Kingdom on the 25th of July to represent Cambodia in the Homeless World Cup – an annual tournament that aims to energise homeless people to change their own lives.
— Khmer Times

Was Cambodia Ever Really a Democracy?
When Cambodia’s main opposition party was forcibly dissolved in 2017, the words “death of democracy” splashed across the front page of the Phnom Penh Post
— The Diplomat

South Korea Interested in Investing in Beauty Training Centre in Cambodia
A delegation of South Korea’s International Association of Education in the Beauty Sector has expressed its interest to create a National Centre for Beauty Science in Cambodia to provide training for Cambodian youth and to ensure quality, effectiveness and safety of cosmetic services.
— AKP

Cambodia Having Good Amount of Rainfalls for First Three Weeks of July
Cambodia is experiencing good amount of rainfalls for the first three weeks of this month.
— AKP

Kingdom’s UN rep defends rights record
Cambodia’s permanent representative to the United Nations in Geneva yesterday slammed an allegation from the EU, UK, France and Australia that the Kingdom has “shrunk the space for freedom of expression”.
— Khmer Times

Team of young engineers construct first humanoid made in Cambodia
A team of 14 young people from Cambodia have spent more than a year investing their knowledge, skills and resources into making what is likely the Kingdom’s first locally made humanoid.
— The Phnom Penh Post

NALDR assigned to solve land dispute with KNUP chief
The government has assigned the National Authority for Land Dispute Resolution (NALDR) to assess and solve a conflict between a company and the Khmer National United Party president Nhek Bun Chhay, who is also a member of the Supreme Council for Consultation and Recommendations.
— The Phnom Penh Post

Rainsy releases seven-point plan for return to Kingdom
Sam Rainsy, the “acting president” of the Supreme Court-dissolved Cambodia National Rescue Party (CNRP), released a seven-point plan on Monday to be fulfilled on his return to the Kingdom.
— The Phnom Penh Post

Debate rages over current vehicle regulations at ports
Senior officials from the Ministry of Public Works and Transport and National Police lauded the current regulations on vehicle technical inspections at Sihanoukville and Phnom Penh autonomous ports.
— The Phnom Penh Post

PM Hun Sen Warmly Welcomed by Cambodian Communities in Europe
Samdech Akka Moha Sena Padei Techo Hun Sen, Prime Minister of the Kingdom of Cambodia, and his high-level delegation were warmly welcomed by the Cambodian communities in Switzerland and other European countries.
— AKP

Former CNRP council members depart from politics
Two teachers, who are former Kampong Thom provincial council members for the Supreme Court-dissolved Cambodia National Rescue Party (CNRP), have announced that they will no longer participate in any political activity, especially related to the CNRP, to avoid being fired or physically attacked.
— The Phnom Penh Post

Hunt on for robbery-murder suspect
Police are hunting down the suspect responsible for killing a man and stuffing his body in a bag in Kandal province as investigations into the gruesome murder continue.
— The Phnom Penh Post

Cracking down on sexual abuse against children after Siem Reap case
A US national was in May charged with sexually abusing four underage girls in Siem Reap, raising concern among authorities and families over the safety of children from the dangers of sex tourism and paedophiles.
— Khmer Times