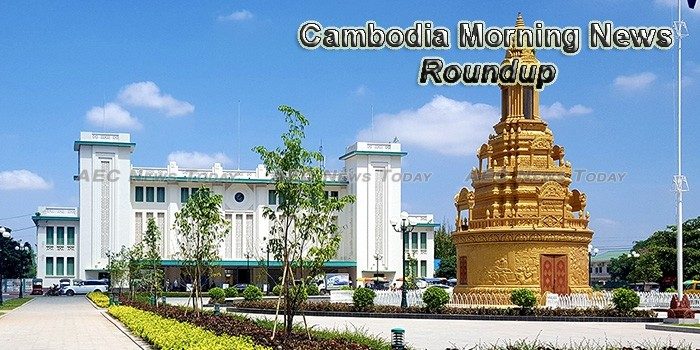 Electricity $4.4B closer to sufficiency
Over $3.2 billion was invested last year into increasing domestic electricity production, with an additional $1.2 billion sunk into infrastructure, according to the national electricity regulator.
—  The Phnom Penh Post

Govt reinstates biosecurity measures
The Agriculture, Forestry and Fisheries Ministry will reinstate sanitary and phytosanitary (SPS) inspections on imported goods close to 10 years after having made the commitment to the World Trade Organization (WTO).
—  Khmer Times

Battambang on course for growth
Battambang, the city at the epicentre of Cambodia’s agricultural heartland, has long struggled to reward its farmers with profits and compete in global markets.
—  The Phnom Penh Post

US investors remain positive
The US-ASEAN Business Council, which organised last week’s visit to Cambodia by a high-level delegation of US business representatives, is one of the most active bodies promoting US investment in the Kingdom.
—  The Phnom Penh Post

Another Private Bank Plans to Change Logo
After three private financial institutions said they would be changing their logos at the behest of the government last week, another major bank said it too would soon undergo rebranding.
—  The Cambodia Daily (paywall)

Vietnam Loggers Charged, Cambodian Released
The Mondolkiri Provincial Court has charged six Vietnamese nationals with logging and entering Cambodia illegally after they were caught last week attempting to drive back to Vietnam with a convoy of trucks loaded with contraband timber.
—  The Cambodia Daily (paywall)

CNRP Fast-Tracks Election of New President
The opposition CNRP will have a permanent new president by the end of the week, replacing recently resigned opposition leader Sam Rainsy, in order to ensure that the party can officially endorse candidates for commune elections in June.
—  The Cambodia Daily (paywall)

Sewage Overflow Hits Environment Ministry’s New Expensive Offices
The Environment Ministry is working with Phnom Penh authorities to stem the flow of smelly wastewater from the city’s overloaded sewage system into the waterway behind its new headquarters, officials said on Sunday.
—  The Cambodia Daily (paywall)

Cambodia to keep ivory for exhibition
rime Minister Hun Sen announced on Friday that Cambodia will keep confiscated ivory, rhinoceros horns and other confiscated goods to show in an exhibition Cambodia will not burn or destroy the items, he said.
—  Khmer Times