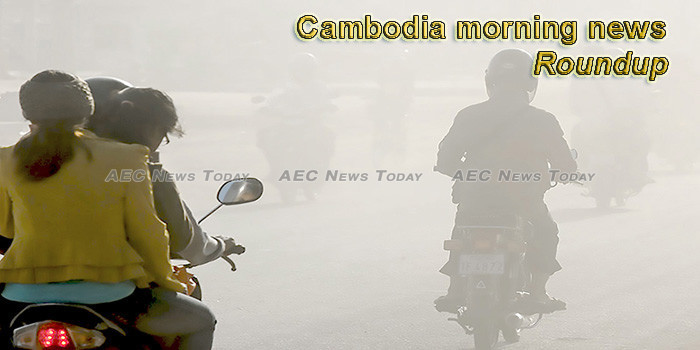 Cambodia Collects $1.5 Billion Tax Revenue in Six Months
Cambodia’s General Department of Taxation (GDT) collected over USD 1,500 million in tax revenue during the first semester of 2019, an increase of 29 percent compared to the same period in 2018, according to director-general Kong Vibol.
— Fresh News Asia

Ministry requests ADB aid for the most needy
Cambodia on Tuesday requested the Asian Development Bank (ADB) to consider providing aid – especially to the elderly, people with disabilities and orphaned children.
— The Phnom Penh Post

Cambodian Opposition Chief Warns Against China’s Growing Dominance, Military Presence
Exiled Cambodian opposition leader Sam Rainsy called on Cambodians in a statement on Tuesday to oppose what he called China’s colonization of the Southeast Asian country, warning especially against the use of Cambodia as a base for a growing Chinese military presence.
— RFA

Cambodia’s Export Sector Is Booming, Thanks To Travel Products
It turns out many people trust Cambodia’s reputation for manufacturing various travel goods as the latest data revealed that exports within the January to May period surged by over 15 percent.
— Business Times

SK ups migrant worker quotas
South Korea said it will increase its quotas of Cambodian migrant workers for three consecutive years, but reduce the number of workers from Thailand.
— The Phnom Penh Post

VIP prison cancellation still needs approval
The Ministry of Interior on Tuesday said the future of the $4 million VIP prison project was awaiting the final decision of Prime Minister Hun Sen as head of government and had not yet been officially cancelled.
— The Phnom Penh Post

Energy Delegation Visits USA
Cambodian delegation has conducted exposure visit under the cooperative framework of the ASEAN Council on Petroleum to the United States of America.
— AKP

Keisuke Honda’s fund invests in Agribuddy
KSK Angel Fund, founded by professional footballer Keisuke Honda, announced on Tuesday that it is investing in Japan-owned Agribuddy, a startup that works in Cambodia and India to boost agricultural production.
— Khmer Times

Rubber Export Up 24 Percent in First Semester
Cambodia exported 104,261 tons of rubber in the first six months of this year, a 24 percent increase compared to the same period last year.
— AKP

Cambodia’s rice exports to China up, EU sales down
Following the tariffs imposed by the European Union (EU) on Cambodian rice, Cambodia’s rice export to EU fell sharply 32 per cent in the first six months, showed data from the Secretariat of One Window Service for Rice Export Formality
— Far Eastern Agriculture

Kampong Cham residents affected by riverbank collapses
Kampong Cham provincial authorities will relocate residents from more than 100 houses which are in danger following the collapse of riverbanks in several areas due to recent erosion.
— Khmer Times

SmartScale to conclude with a Demo Day
A Demo Day will be held on July 25 to mark the conclusion of the SmartScale startup accelerator program.
— Khmer Times

Deep reforms needed to continue ‘healthy’ growth: Ministry
The government projects a slowdown in economic growth next year, going from a growth rate of 7.1 percent in 2019 to 6.5 percent in 2020.
— Khmer Times

Prosecutor appeals against ‘lenient sentence’ for abuse of three-year-old
The Appeal Court on Tuesday heard the case of a man convicted last year of sexual harassment against his three-year-old niece after the Kampong Speu provincial court prosecutor complained that the court’s decision to downgrade the charge from rape and only impose a three-year jail sentence was too lenient.
— The Phnom Penh Post

Work on PP railway line to start this year
Plans to build a 19km-long railway along six roads in Phnom Penh will begin this year.
— The Phnom Penh Post

Action called against ‘inciters’
The Ministry of Land Management, Urban Planning and Construction has said it will not look to resolve a land dispute involving seven communities in Tbong Khmum province, calling instead for measures against those it considers responsible for inciting protests.
— The Phnom Penh Post

Cambodian held in Thailand over gang-rape of 13-year-old
The Cambodian consul in Bangkok was offering legal assistance on Wednesday to a Cambodian national after his arrest in Thailand’s eastern Chon Buri province for his alleged involvement in the gang-rape of an underage girl.
— The Phnom Penh Post