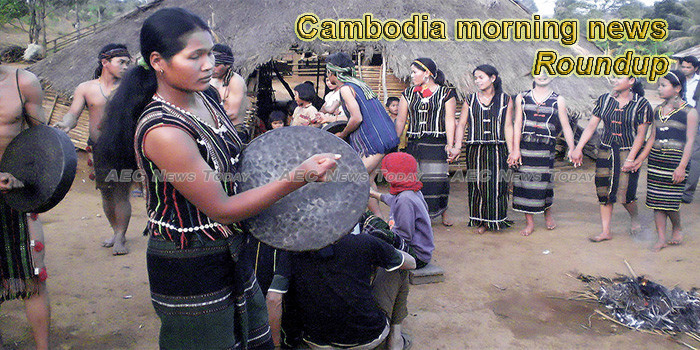 Approved investments a boon for commercial land
The economic stability and strong inflow of foreign direct investment (FDI) during the first half this year is a strong indicator of the continued growth of the Cambodia real estate sector, industry insiders are saying.
— Khmer Times

Embassy calls for release of 85 ‘traffickers’ from Thai jail
The Royal Embassy of Cambodia in Bangkok sent a letter to the Thai authorities on Monday requesting the release of 85 Cambodian workers imprisoned near the border in Sa Kaeo province over their alleged involvement in human trafficking.
— The Phnom Penh Post

Helmet enforcement campaign sees reduction in road accident death toll
Minister of Interior Sar Kheng on Monday commended traffic police throughout the Kingdom for stepping up the government’s “wearing a helmet” campaign, which he said had reduced death toll among motorcycle riders.
— The Phnom Penh Post

OCM’s Spokesperson: Gov’t Wants Cambodia to Be Attractive to Investments
Spokesperson of the Office of the Council of Ministers (OCM) H.E. Ek Tha has confirmed the new list of public holidays in Cambodia for 2020, explaining that the government wants the country to be competitive and attractive to investments.
— AKP

PM rejects split of interior ministry
Prime Minister Hun Sen on Monday dismissed the idea of creating a new “ministry of national security” by separating the National Police from the Ministry of Interior as the ministry was not an institution “without influence”.
— The Phnom Penh Post

The Man Behind Cambodia’s Khmer Rouge ‘Died Easier Than the People He Killed’
In his most recent photos, Nuon Chea looks like somebody’s grandfather, wearing big dark glasses that suggest a sensitivity to light possibly tied to other medical problems.
— VOA

Pagoda chief in ‘sex scandal’ leaves the monkhood
The former chief monk of the capital’s Por Satharam pagoda who was implicated in a sex scandal in June has officially left the monkhood amid fierce public criticism, a senior monk official said.
— The Phnom Penh Post

Ministry official probed for attempted land grab
An official in Mondulkiri province has said the ministries of Interior, and Environment are investigating Ministry of Justice undersecretary of state Seng Sovannara on suspicion of faking documents to grab land in the Phnom Prich and Keo Seima Wildlife Sanctuaries.
— The Phnom Penh Post

Man questioned over pro-CNRP customers
A former opposition official in the capital yesterday said his shop faces closure after he was accused of providing a platform to CNRP supporters who planned to welcome the return of exiled leaders.
— Khmer Times

Air Passenger Traffic Increases Remarkably in First Half of 2019
Cambodia’s three international airports experienced noticeable growth of passenger traffic in the first six months of this year, thanks to increasing flight connections across Asia, particularly with China.
— AKP

Women Leaders to Attend Rare Leadership Course
Women leadership at various government ministries and institutions, including the Ministry of Information, will attend a Women Leaders and Board of Management 2019 training course hosted by the Royal School of Administration here in Phnom Penh.
— AKP

Early years educational intervention in rural Cambodian communities
In a remote village surrounded by banana trees, little children in their pyjamas and dirty clothes happily count “1, 2, 3, 4, 5” as they copy their teacher doing aerobic exercises before class.
— The Phnom Penh Post

President of Sri Lanka to Pay State Visit to Cambodia
At the invitation of His Majesty Preah Bat Samdech Preah Boromneath Norodom Sihamoni, King of Cambodia, His Excellency Maithripala Sirisena, President of the Democratic Socialist Republic of Sri Lanka, will pay a state visit to the Kingdom of Cambodia from 07 to 10 August 2019, according to Cambodian foreign affairs press release dated Tuesday.
— Fresh News

US$128 Million Investment Projects Licensed in July Alone
The Council for the Development of Cambodia (CDC) has approved a total of US$128 million investment projects in July.
— AKP

Capitol VIP Van In Pursat Crash
There was an accident between a Capitol VIP minivan and a Hyundai bus on August 6, 2019, at 12.20 minuteson Route 5 Kilometer 162-163 is located in Svay Sor village, Krakor district, Pursat province.
— CNE

Young Cambodian Dropout Finds Success in Arts
Sievphin Chong, 24, chose an unconventional career path for a Cambodian. After growing up in the remote northeastern provinces of Steung Treng and Ratanakiri, Sievphin moved to Phnom Penh to study design at university. But that was not to be once Sievphin found his passion and an outlet for his creativity — making short, funny videos for social media.
— VOA

The Habit Burger Enters Cambodia with a 25-Unit Franchise Deal
The Habit Restaurants has announced plans to expand throughout Cambodia in a 25-store development agreement with Amory F&B Company. The first Habit Burger Grill restaurant under the agreement is expected to open in the capital city of Phnom Penh in spring 2020.
— Franchising

Police athletes depart for Chengdu
Almost 100 members of the National Police Sport Union of Cambodia are headed to China for the 18th edition of the 2019 18th World Police and Fire Games in Chengdu.
— Khmer Times