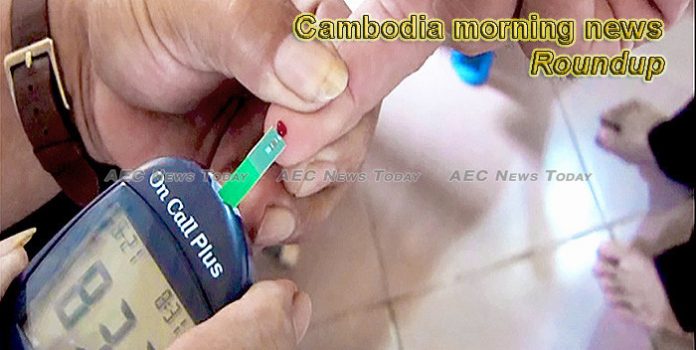 EBA removal won’t affect development projects: EU
The potential cancellation of the Everything-but-arms (EBA) scheme will not have an impact on development projects in Cambodia funded by the European Union, according to George Edgar, the EU Ambassador to Cambodia.
— Khmer Times

Cambodian National Police: law enforcement gets a make-over (video)
A recent government information video showing young officer-cadets being drilled in everything from jungle combat to dance is providing a visually stunning insight into the ideals behind Cambodia’s police training regimen.
— AEC News Today

Vietnam & Cambodia’s grisly museums of war & death appeal most to visitors (videos)
When it comes to the regions arts, culture, and history it seems it is the grisly past that appeals the most to Asean visitors. The regions two most popular museums being testimony to war, pain, death, and destruction.
— AEC News Today

UN expert: Civil society is crucial for sustainable development in Cambodia
“Good governance requires strong and open institutions that function according to human rights principles,” said Rhona Smith, the Special Rapporteur on the situation of human rights in Cambodia at the end of an 11-day visit to the country.
— AEC News Today/ PR Newswire (media release)

Cambodian PM Has the Privilege to Ask for Amnesty; Not Meddling Judicial Power: MoJ Spokesman
Ministry of Justice’s Secretary of State and spokesman Kim Santepheap, on 11 November 2018, clearly explained to the public that Prime Minister of Cambodia has the privilege to request for amnesty for the convict any time in accordance with Article 77 of Cambodia’s Prison Law, and that it is not interfering with the judicial power.
— Fresh News

NGO to pay farmer $3,000 for cutting down trees
A farming family has agreed to receive $3,000 in compensation from the Wildlife Alliance after it cleared the family’s fruit trees in Koh Kong province’s Koh Kong district.
— Khmer Times

Launch of Beijing-Phnom Penh flight delayed
Air China, the country’s national flag carrier, announced last week that the launch of a direct flight between Phnom Penh and Beijing will be delayed to early next year, after having previously scheduled it for November.
— Khmer Times

‘We need to fix Sihanoukville’ Q&A with Transparency International
The massive investment coming from China into Sihanoukville has positive and negative effects on the province. In order to understand the pros and cons, Transparency International executive director Preap Kol sat with Khmer Times Business Insight to dissect the situation in the province.
— Khmer Times

How to fight back against a dictator, according to an exiled democracy activist
When a country has a strongman for a ruler, an army at his disposal, and control of the media, how can the people fight back?
— Quartz

Trekking becomes a new attraction at Angkor Park
Raising sheets of white paper with numbers written on it, Chheav Taing Kouch a travel agent from Peak DMC Cambodia calls each one as he assembles his group prior to trekking inside the Angkor archaeological park.
— Phnom Penh Post

Cambodia’s PM Hun Sen Admits ‘He Is The Court’ by Accepting Wager: Sam Rainsy
Cambodia’s Prime Minister Hun Sen has implicitly admitted to controlling the country’s courts by saying that Kem Sokha, the head of the now-dissolved opposition Cambodia National Rescue Party (CNRP), will not be freed from house arrest within the first two months of 2019, the party’s former president said Friday.
— Radio Free Asia

‘EBA will stay if human rights improve’
UN Special Rapporteur for Human Rights in Cambodia Rhona Smith on Thursday reiterated that access to the EU’s preferential Everything But Arms trade agreement would not be withdrawn if the situation in the Kingdom improved.
— Phnom Penh Post

Asean parliamentarians target election results
Asean Parliamentarians for Human Rights on Friday called on Southeast Asian leaders to put crises of human rights in Cambodia and Myanmar at the top of the agenda as they gather for the Asean Summit in Singapore tomorrow.
— Khmer Times

Helping Cambodia to banish ghosts and release its creativity
LINA opened her restaurant two weeks ago in a fishing village in Kep, in the south of Cambodia, close to the Vietnamese border. Fifty years ago this coastal resort was known as Cambodia’s Cote d’Azure, and when you wander around in the back of a tuk-tuk you can’t help but notice the wide avenues and walled gardens.
— The National

Surrogate mother bust
The Phnom Penh Municipal Police arrested 15 people related to surrogacy who were together in a house in Sen Sok district. Eleven of the persons arrested on Thursday (Nov.8) are surrogate mothers, two cooks for the ladies, and two unspecified men.
— Khmer Times

Smith calls for ‘release’ of Sokha as visit ends
At a press conference to conclude her 11-day visit to Cambodia, UN Special Rapporteur for Human Rights in Cambodia Rhona Smith on Thursday called for treason charges against former opposition leader Kem Sokha to be dropped and for him to be released from “restricted detention”.
— Phnom Penh Post

Aspiring architect-turned-artist derives comfort from painting
It sounds strange for someone who studied drawing and designing buildings to become a successful painter.
— Phnom Penh Post