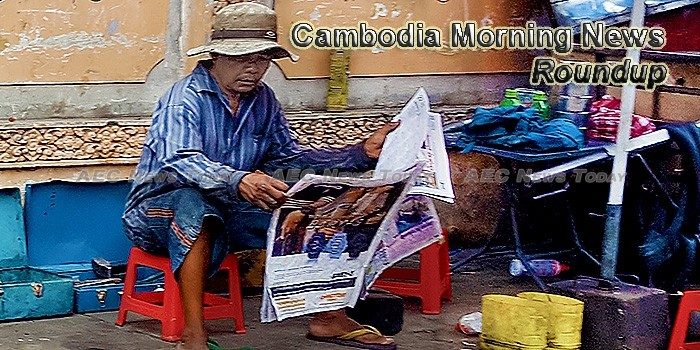 Smooth trade to put $2B exports in reach
Cambodia could expand its foreign trade by up to 16 percent, adding approximately $2 billion worth of exports, by complying with a new international trade protocol that aims to slice through the red tape that slows and complicates cross-border trade.
— The Phnom Penh Post

Millers push for China access
Amid concerns that the European Union could reject shipments of Cambodian rice, exporters are pushing for more access to China as an alternative market for the Kingdom’s principal agricultural commodity.
— The Phnom Penh Post

Government Aims to Comply With Cross-Border Trade Agreement
The U.S. on Tuesday advised Commerce Ministry representatives on streamlining import-export systems and generally making trade with other nations easier during a workshop in Phnom Penh, held to help Cambodia comply with a World Trade Organization agreement to simplify cross-border trade.
— The Cambodia Daily (paywall)

US to Drop Funding for UN Body Behind Millions in Aid
The U.S. has pulled its support for the U.N. Population Fund (UNFPA), potentially affecting millions of dollars worth of aid to government ministries and NGOs in Cambodia previously earmarked to improve family planning and reproductive health.
— The Cambodia Daily (paywall)

Cambodia’s 4 listed firms report profits last year
All four companies listed on the Cambodia Securities Exchange (CSX) have earned profits in 2016, according to their financial reports released by the CSX on Tuesday.
— Xinhua

Thailand and Cambodia strengthen ties with China
Thailand’s government yesterday agreed to buy 10 tanks from China for US$58 million (S$81 million), while Cambodia told a United States Navy unit its services were no long needed, in another sign of the South-east Asian countries loosening links with Washington as they strengthened ties with Beijing.
– The Straits Times

Navy told ‘defend national unity’
The Cambodian navy must be ready to fight attempts to topple the Kingdom’s government, a top official said recently, in remarks that coincide with the announcement that a United States Navy battalion performing development work has been booted from the country despite having more than $800,000 of projects
in the pipeline.
— The Phnom Penh Post

Teachers’ Union Claims Intimidation by Interior Ministry
A prominent teachers’ union known for its frequent criticisms of government policies is asking for clarification from the Interior Ministry after receiving a complaint the union says questions the legitimacy of its newly elected president.
— The Cambodia Daily (paywall)

PM Apologizes for Delay in Hosting SEA Games in Cambodia
Prime Minister Hun Sen on Tuesday broke ground on a $175-million, Chinese-funded sports complex that will be used to host the 2023 SEA Games, apologizing to sports fans for the country being too busy rebuilding after war to host the games sooner.
— The Cambodia Daily (paywall)

Military Issues New Threat against Cambodians Plotting ‘Color Revolution’
Cambodia’s defense minister has warned that the military will use force against any movement found to be plotting sedition ahead of elections due to be held over the next two years.
— VOA

Dozens of Montagnards Flee Cambodia For Thailand Amid Fears of Repatriation to Vietnam
Some 50 Montagnard asylum seekers have fled Cambodia to Thailand in recent weeks amid fears of forced repatriation to Vietnam, where they complain of discrimination and persecution at the hands of local authorities, a nongovernmental organization that monitors hill tribes said Monday.
— Radio Free Asia

China-Funded Stadium Key to Improving The Lives of Cambodians: PM Hun Sen
Cambodia’s Prime Minister Hun Sen on Tuesday dismissed criticism over his government’s use of funds to construct a new soccer stadium in the capital Phnom Penh, saying the money was donated by China and that the project was key to improving the lives of Cambodians after the brutal Khmer Rouge regime.
— Radio Free Asia

Why Did Cambodia Just Downgrade US Military Ties Again?
U.S. Navy personnel have been told to leave the Southeast Asian state in another blow to defense ties.
— The Diplomat