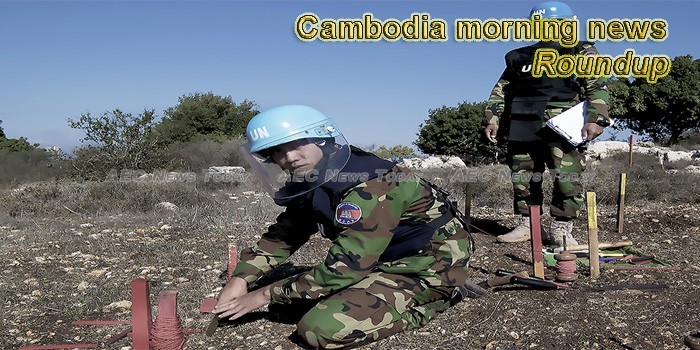 Tourism dollars lost on imports
Cambodia’s Ministry of Tourism will exert pressure on the country’s hospitality industry to use more local products to spread the benefits of tourism to communities.
— TTR Weekly

Cambodia’s environment, Singapore’s problem
The National Environment Authority has said the urine and burning smells detected island-wide are in fact the result of fires at landfills and farm sites in Johor.
— Malay Mail

Government To Take Railway From Royal Group
The Royal Government of Cambodia this morning decided to take back the exclusive concession of railway service from the Royal Railway – one of 20 companies listed and operated under Royal Group.
— Cambodia News English

Measurement, registration of disputed land delayed
The governor of Phnom Penh’s Por Sen Chey district on Thursday delayed the measurement and registration of an 18ha plot of land in Trapaing Krasang commune after a protest by more than 50 families who also laid claim to the land.
— The Phnom Penh Post

Cambodian PM: G-PSF Not Held Because of EBA
Cambodian Prime Minister Samdech Akka Moha Sena Padei Techo Hun Sen has affirmed that the 18th Government-Private Sector Forum (G-PSF) has nothing to do with the suspension of the European Union’s Everything But Arms (EBA) scheme.
— Agence Kampuchea Presse

Jica leading way in Kingdom’s growth, infrastructure push
‘It’s not only about the restoration. It’s also about the training of human resources, like stonemasons, engineers, archaeologists and architects.
— The Phnom Penh Post

Government to bring Turkish powership
To counter an energy deficit that is causing daily blackouts across the country, the government said on Wednesday that it will rent a from Turkey for the next three years.
— Khmer Times

Government creates ‘sectoral’ groups
Ahead of the annual meeting between the two, the government has announced the creation of 13 groups to work in partnership with the private sector.
— The Phnom Penh Post

New Kampot Water Works Set to Open
A new water treatment plant costing more than US $ 26 million, with the assistance of the Japanese government, will be officially launched on April 2, 2019.
— Cambodia News English

Rainsy given court date over military disobedience charges
The Phnom Penh Municipal Court has set April 22 as the date for “acting president” of the Cambodia National Rescue Party (CNRP) Sam Rainsy to appear for a public hearing on charges of inciting the military to disobey Prime Minister Hun Sen.
— The Phnom Penh Post

Authorities, villagers fearful over elephant herd in Mondulkiri
Authorities and villagers in Mondulkiri province’s Keo Seima district have expressed fear for their safety after a herd of wild elephants roamed around their communities in Sre Khtum commune.
— The Phnom Penh Post

Kingdom attracts 1.2M tourists in Jan and Feb
Cambodia attracted 1.24 million foreign tourists during the first two months of this year, a nearly 10 per cent increase compared to the same period last year, according to a Ministry of Tourism report.
— The Phnom Penh Post

Kingdom’s pig prices up despite concerns over African swine fever
Despite real concerns that African swine fever (ASF) will spread to the Kingdom after a recent outbreak in Vietnam, local pig prices have continued to increase over the last few months, the Cambodia Livestock Raisers Association (CLRA) said on Thursday.
— The Phnom Penh Post