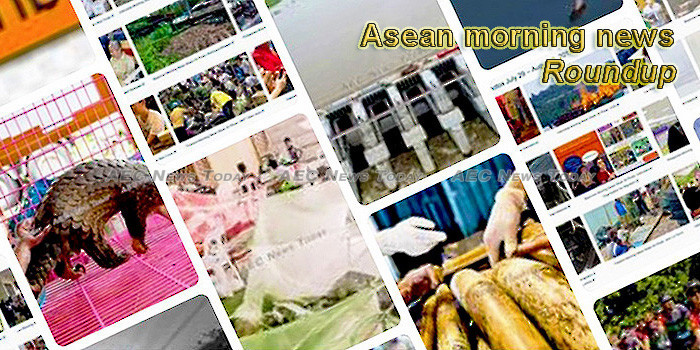 Climate strike Asean: youth across the AP demand climate action (photo gallery)
Youth and citizens of one of the world’s most at risk nations, Kiribati (pronounced khi-ra-bus), yesterday (Sep 20) heralded in #Climatestrike 2019, a global day of protest by the world’s students against the current climate crisis and the lack of action by world leaders and heads of industry to reign in global heating.
— AEC News Today

What happened to the Asean haze agreement? Experts say deal is toothless
The recurring haze season afflicting neighbours Malaysia, Indonesia and Singapore is unlikely to abate if the countries rely solely on the Asean Agreement on Transboundary Haze Pollution (AATHP), several experts have noted.
— Today Online

Asean may fare worse in next downturn than in earlier crisis: Report
South-east Asia is at greater risk of an economic downturn than it was during the global financial crisis a decade ago, said a new report.
— Straits Times (very annoying popups)

AIIB to invest 1.09 bln USD in ASEAN countries to boost interconnectivity
Jin Liqun, the president of China-initiated Asian Infrastructure Investment Bank (AIIB), said on Sunday that the bank will invest in six projects with 1.09 billion U.S. dollars in countries of the Association of Southeast Asian Nations (ASEAN).
— myRepublica

Only 1 in 5 Asean business leaders have a plan in place to deal with impending downturn: Bain report
On the back of geopolitical uncertainties, a global downturn seems to be inevitable. But the majority of business leaders in Southeast Asia might find themselves caught on the back foot.
— The Edge Markets

ASEAN’s Infrastructure Dilemma
The 10 members of the Association of Southeast Asian Nations require a collective US$2.76 trillion in infrastructure spending between 2016 and 2030, according to the Asian Development Bank (ADB).
— Asia Sentinel

Singapore may fare worse than Asean peers in the next global crash
SOUTH-EAST ASIA is more vulnerable to a downturn than it was during the last global financial crisis, Bain & Co warned in a report out on Friday.
— The Business Times (very annoying popups)

Cambodian woman crowned as Asean debate champion
A 19-year-old Cambodian woman was chosen as one of the five winners at the Asean Intergovernmental Commission on Human Rights (AICHR) 6th Annual Youth Debate on Friday.
— The Phnom Penh Post

Over 2,800 companies to attend China-ASEAN Expo
A total of 2,848 enterprises from over 30 countries will attend the 16th China-ASEAN Expo, which will be held in south China’s Guangxi Zhuang Autonomous Region Saturday.
— Ecns.cn

Haze-free ASEAN coming soon?
After more than two decades, the region is well on its way to achieving its vision of a transboundary haze-free ASEAN by 2020.
— The Asean Post

Why Setting Up in Singapore Makes Sense for Business in ASEAN
Singapore has long been a preeminent destination for setting up a regional headquarters to pursue business opportunities across ASEAN and Asia.
— Asean Briefing

Top 10 ASEAN footballers with the highest transfer market values revealed
With more and more players from Southeast Asia making moves to various leagues in Europe, there is no doubting that the demand for quality ASEAN footballers is on the rise.
— Asian Football

Cambodian Military Adamant There Is No Secret China Deal
Speculation has been rife over Cambodia’s alleged agreement to grant China exclusive access to a naval base in Preah Sihanouk province. The move reported in a Wall Street Journal article and confirmed by a senior U.S. military official is the latest move in the geopolitical tussle involving Cambodia, China and the U.S.
— VOA

Cambodia Negotiating FTA with the Eurasian Economic Union
Cambodian officials are travelling to Moscow next month to discuss a free trade agreement (FTA) with the Eurasian Economic Union (EAEU). The EAEU sits between China and the European Union, and comprises Armenia, Belarus, Kazakhstan, Kyrgyzstan, and Russia. It has a combined population of 183 million and an annual GDP (PPP) of US$5 trillion.
— Asean Briefing

Flood death toll in Cambodia rises to 16
Mekong River floods and flash floods in other places have so far caused 16 people dead and five others injured in Cambodia, Keo Vy, a spokesman for the National Committee for Disaster Management (NCDM), said on Sunday.
— Xinhua

Endangered Tapanuli orangutan found malnourished, injured out of habitat near Batang Toru
A Tapanuli orangutan was found wounded and malnourished on a plantation near the Batang Toru ecosystem in South Tapanuli, North Sumatra, on Thursday, marking what local authorities claim is the first indication of conflict between humans and the newly discovered species in the area.
— The Jakarta Post

‘We don’t have a spare planet’, students demand action as Indonesia joins global climate strike
Hundreds of activists and students took to the streets of Jakarta on Friday afternoon as part of a historic global climate strike that kicked off on Friday protesting inaction on the climate crisis and demanding that governments take clear measures to mitigate environmental impacts.
— The Jakarta Post

China Donates US$100,000 For Relief Efforts In Flood-hit Provinces
The Chinese government has donated US$ 100,000 to support relief and recovery efforts in Khammuan, Savannakhet, Saravan, Xekong, Attapeu and Champassak which have been severely flooded.
— KPL

In Malaysia, hundreds march for climate change as part of global strike
Coinciding with the Global Climate Strike protest taking place worldwide, more than 350 people took part in a march here today calling for action against climate change and to hold the powerful accountable for the.
— Malay Mail

Myanmar vows to take stricter action on illegal trade
Myanmar will take strict action against illegal trade with the aim of substantially reducing the volume of fake or illegal products entering the market, said U Soe Win, Minister of Planning and Finance.
— Myanmar Times

Export surges to $15.97 bln in current fiscal year
Myanmar’s exports to foreign countries touched a high of US$15.97 billion between 1 October, 2018 and 13 September, 2019, according to data of the Ministry of Commerce.
— The Global New Light of Myanmar

More than 740 passengers affected after Ipoh flights cancelled due to haze
IPOH: Six out of 14 flights scheduled out of Sultan Azlan Shah Airport in Ipoh were cancelled on Sunday (Sep 22) morning due to the haze.
— CNA

WHO stresses vaccination vs polio
The World Health Organization has urged local government units to ensure that polio vaccination campaigns in their jurisdictions are “planned and implemented effectively.
— Tempo

Singapore may fare worse than Asean peers in the next global crash
SOUTH-EAST ASIA is more vulnerable to a downturn than it was during the last global financial crisis, Bain & Co warned in a report out on Friday.
— The Business Times (very annoying popups)

S$100 ‘early disposal incentive’ for e-scooters that do not meet fire safety standards: LTA
The Land Transport Authority (LTA) is offering cash and free disposal of personal mobility devices (PMDs) which do not meet new fire-safety standards, ahead of next July’s ban on the use of such devices here.
— Channel News Asia (very annoying popups)

Climate strike Asean: youth across the AP demand climate action (photo gallery)
Youth and citizens of one of the world’s most at risk nations, Kiribati (pronounced khi-ra-bus), yesterday (Sep 20) heralded in #Climatestrike 2019, a global day of protest by the world’s students against the current climate crisis and the lack of action by world leaders and heads of industry to reign in global heating.
— AEC News Today

Govt speeding up megaprojects
The government is expediting the Transport Ministry’s mega-investment projects worth almost 2 trillion baht to stimulate financial flows and deal with anticipated volatility in the global economy next year.
— Bangkok Post

Thai Court Acquits Pro-Democracy Activists of Sedition, Illegal Assembly
A Thai court acquitted six pro-democracy activists Friday of sedition and illegal-assembly charges over a protest last year when they demanded a general election, which the military government at the time had already postponed repeatedly.
— BenarNews

Vietnam’s first 5G network launched by Viettel
“The official broadcast of 5G in Ho Chi Minh City is an important milestone in Viettel’s strategy to make Vietnam one of the first countries in the world to commercialize 5G services,” Viettel deputy director Tao Duc Thang said in a statement.
— Vietnam Insider