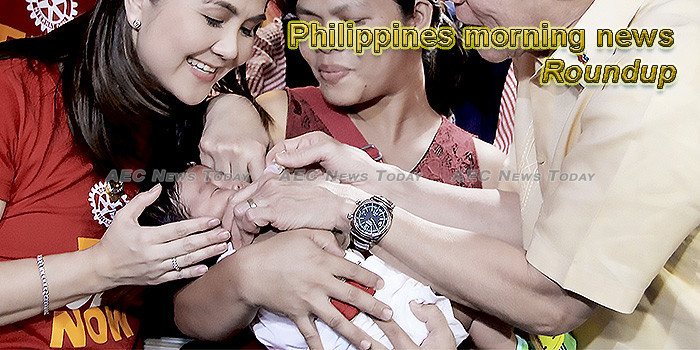 More than 740 passengers affected after Ipoh flights cancelled due to haze
IPOH: Six out of 14 flights scheduled out of Sultan Azlan Shah Airport in Ipoh were cancelled on Sunday (Sep 22) morning due to the haze.
— CNA

WHO stresses vaccination vs polio
The World Health Organization has urged local government units to ensure that polio vaccination campaigns in their jurisdictions are “planned and implemented effectively.
— Tempo

Parents re-vaccinate kids against polio as disease returns to PHL
Some parents are bringing their children in to health centers for another dose of the polio vaccine after it was announced that the disease has reappeared in the Philippines after 19 years.
— GMA Network

AFP: No tolerance for hazing
The Armed Forces of the Philippines has maintained that it does not tolerate hazing or any kind of action that endangers the lives of its members following the tragic death recently of a plebe of the Philippine Military Academy.
— Tempo

Duterte to veto ‘unconstitutional’ provisions in 2020 budget
President Rodrigo Duterte will veto the proposed PHP4.1-trillion national budget for 2020 if he thinks it violates the Constitution, Malacañang said.
— Philippine News Agency

Conditions ripe for rate cut — poll
ECONOMIC CONDITIONS are right for a cut in benchmark interest rates, according to analysts asked last week, most of whom said monetary authorities will probably make their move in their sixth policy review for the year this Thursday with a 25 basis-point reduction.
— BusinessWorld

Meat processors assure ASF-free products
The Philippine Association of Meat Processors Inc. reassured the public yesterday that their processed meats and other products are free from the African Swine Fever.
— Tempo

Parents need convincing to have their kids vaccinated: Palace
Malacañang expressed alarm over the reemergence of polio in the Philippines stressing that there should be greater effort to convince parents to have their children vaccinated.
— Philippine News Agency

Thunderstorm advisory hoisted over Mindanao
The Philippine Atmospheric Geophysical and Astronomical Services Administration said moderate to heavy rainshowers with lightning and strong winds due to thunderstorms are expected over Zamboanga del Sur and Zamboanga Sibugay within 1 to 2 hours.
— Eagle News

NBP drug lords told: Try ‘dextrose’ that can put you to perpetual sleep
Convicted drug lords who pretend to be sick so they to would be given hospital passes may want to try a dextrose that would put them to sleep for the rest of their lives, Senator Bong Go said Sunday.
— GMA Network

#2030Now: Green initiatives go a long way for urban communities
Even small initiatives can create an impact on communities in need of fresh air, healthier alternatives, and sustainable practices.
— Rappler

Philippines’ Duterte pestered again as gecko stalls speech
A noisy gecko was the latest wildlife contributor to an address by Duterte, interrupting the leader on Thursday (Sep 20) evening just as he launched another tirade at human rights groups critical of his bloody war on drugs.
— CNA (very annoying popups)

Over 6K residents join Laoag City’s run for unity
Over 6,000 Laoag City and Ilocos Norte residents occupied the major thoroughfares in this city on Saturday as they ran for unity in time for the birthday celebration of Michael Marcos Keon (MMK), city mayor here.
— Philippine News Agency

Environmental activists get down and dirty on mass cleanup day
Thousands of volunteers wielding nets and bin bags scoured coasts, parks and riverbanks across the globe Saturday, September 21, in a litter-picking drive highlighting the vast quantity of trash dumped worldwide, a day after mass international climate protests .
— Rappler

Refugees from rising seas: No place to call home
Most refugees fleeing persecution, famine or civil strife dream of one thing: Going home some day.
— CNA

DOJ: 2,139 GCTA-freed convicts back in jail
The Department of Justice (DOJ) said on Saturday, September 21, that 130 more convicts have surrendered to authorities in line with President Rodrigo Duterte’s order.
— Rappler

Gov’t to fund over 44K science scholars in 2020
Government will be funding the studies of 44,475 science scholars next year — including 1,927 in PhD and 4,264 in Masters’ programs — as part of the “national talent pool the country needs to win the future,” Senate President Pro Tempore Ralph Recto said on Sunday.
— Philippine News Agency

Military drill showcases PH’s first amphibious assault vehicles
OLONGAPO CITY, Philippines – The scenario was a terrorist takeover of a coastal district. The enemy had blocked all roads and access points. By land, the area was isolated, cut off from any help from the world outside.
— Rappler

Farmers seek crackdown on rice ‘profiteering’
A FARMER organization called on the trade department to crack down on traders and retailers who are “profiteering” with still-high retail prices while also forcing farmers to accept low prices for their harvests.
— BusinessWorld

DOJ orders swift processing of surrenderers not on GCTA-freed list
Justice Secretary Menardo Guevarra on Sunday revealed that the Bureau of Corrections (BuCor) had been ordered to fast-track the processing of ex-convicts who surrendered to authorities despite not being among the prisoners erroneously freed due to the Good Conduct Time Allowance (GCTA) law.
— GMA Network

Madrigal vows impartial probe into PMA cadet’s death
All those behind the tragic death of Philippine Military Academy (PMA) Cadet Fourth Class Darwin Dormitorio, allegedly due to hazing, will be made accountable for this incident,
— Philippine News Agency

#2030NOW: Harnessing commuter data to improve mobility
In a country where commuters spend hours on the road for their travels, an efficient public transportation seems like a far-fetched dream.
— Rappler

Ghost of Marcos’ Martial Law seen under Duterte – rights groups
More than 3 decades since democracy was restored in the country, human rights groups warned Filipinos against the oppressive policies and violations under the administration of President Rodrigo Duterte that mirrors those of the late dictator Ferdinand Marcos.
— Rappler