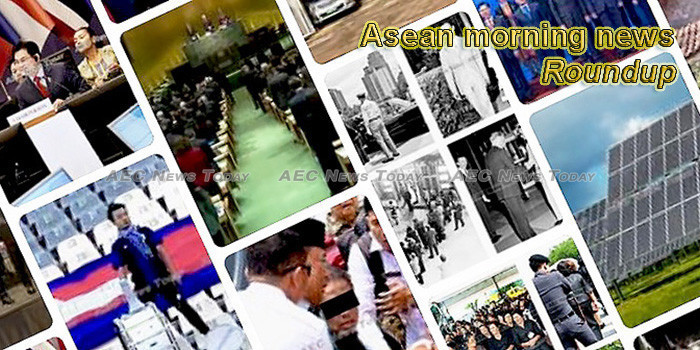 South China Sea likely to be high on Asean agenda when Vietnam takes the chair
Territorial disputes over the resource-rich South China Sea are expected to feature prominently in engagements between China and Asean next year as Vietnam prepares to take over as chairman of the regional body.
— South China Morning Post

Is Donald Trump’s administration ceding Southeast Asia to an ever-aggressive China?
In the recently concluded 7th Asean-US Summit in Bangkok, it was widely reported that only the Thai, Laotian and Vietnamese heads of state showed up.
— South China Morning Post

Why India opted out of the RCEP agreement: Explained in six charts
India decided to walk out of the biggest regional trade partnership the world could have seen.
— Business Standard

Majority view Asean Summit as beneficial to Thailand: Poll
A large majority of people are of the opinion that Thailand has benefited from the 35th Asean Summit held in Bangkok on Nov 1-4, according to an opinion survey by Suan Dusit Rajabhat University, or Suan Dusit Poll.
— Bangkok Post

Key challenges for ASEAN’s next chair
It is a tradition for ASEAN’s 10 members to take turns chairing the regional bloc in alphabetical order, and come 1 January, 2020, Vietnam will formally take over from Thailand fully aware of the responsibilities it will have to shoulder.
— The Asean Post

Four nations seek solutions to low water level of Mekong River
The Office of National Water Resources (ONWR) has held a meeting with the Mekong River Commission in Laos’s Vientiane, with officials from Cambodia, Laos and Vietnam to address the issue of the receding river and the eight affected provinces.
— Newsline (video)

Asean helps Korea keep balance between giants
South Korea and Asean need to work together to build an “inclusive regional cooperation system” to maintain regional stability and peace amid an intensifying power struggle between the United States and China in the region, said Choe Won-gi, a professor at the Korea National Diplomatic Academy (KNDA).
— Korea Joongang Daily

SE Asian banks slowly giving way to e-payments and payment apps
That cold, hard cash in your pocket, and the traditional shop-front banks that give it to you, are slowly being phased out and replaced with e-payments.
— The Thaiger

ASEAN gets ready for Singles’ Day shopping event
The annual 11.11 Singles’ Day Sale has become an event for both shoppers and e-commerce merchants across Southeast Asia, recording online sales that exceed all expectations.
— The Asean Post

Placemaking: Creating better cities for all
Be it the neighbourhood wet market that sells fresh food and produce, street festivals that deliver a dose of art or music, or parks which provide fresh air and a chance to reconnect with nature – public spaces are the cornerstones of thriving communities.
— The Asean Post

Payments in South-east Asia: A new frontier
WITH its high mobile penetration rates and a large underbanked population, South-east Asia is an attractive region for new entrants in the payments space to tackle.
— The Business Times

Increased Expectations in Phnom Penh, Concerns about Potential Political Violence, as Politics in Cambodia Churn
Political tensions are simmering in Cambodia. While most people are going about their everyday lives, there is an undercurrent of apprehension. Saturday is the day longtime opposition leader Sam Rainsy pegged as he planned date to return to Cambodia, potentially ending nearly four years of exile.
— VOA

Lao PM optimistic about sustainable economic growth
“The slower growth of the economy is necessary because the economic base is being transformed to a more realistic position. This is intended to create a strong and sustainable economic foundation as well as build a productivity base and diversify income into local areas,” the premier said.
— ANN/Vientiane Times

Bolivian woman nabbed in Laos with 3.5kg cocaine on Thai tip
Acting on information from the Office of the Narcotics Control Board of Thailand, Lao officials on Friday arrested a Bolivian woman with 3.52 kilogrammes of cocaine in her possession at Wattay international airport in Vientiane, ONCB secretary-general Niyom Termsrisuk said on Sunday.
— Bangkok Post

Australia provides 1.5 billion kip for flood recovery
The funding has been granted to UNICEF to focus on education and nutrition in Attapeu, Champassak, Khammuan, Saravan, Savannakhet and Xekong provinces, according a press release from UNICEF.
— ANN/Vientiane Times

Malaysia needs quality firms to become major hubs
The government needs to focus on building a few quality companies instead of a mass of sluggish companies that can compete at the regional level and achieve its aspiration of becoming an Asean hub for various industries.
— The Borneo Post

Senate set to tackle 2020 budget in plenary
The Senate is set to begin plenary debates Monday on the proposed ₱4.1-trillion 2020 budget.
— CNN Philippines

EU-Singapore trade deal set to take effect on Nov 21, after approval from EU Council
The landmark trade deal between Singapore and the European Union (EU) is set to enter into force in less than two weeks, after getting the green light from the EU Council on Friday (Nov 8).
— Channel NewsAsia (very annoying popups)

Govt to give details of GST support package in Budget 2020, ahead of tax hike in next term: DPM Heng
Raising the Goods and Services Tax (GST) rate is an unpopular move, and the Government could have waited for the upcoming General Elections to be over before announcing it.
— The Straits Times

About 1,000 homeless people live on Singapore’s streets: Study
About 1,000 people live on the streets of Singapore, according to the first study done here to measure the scale of homelessness.
— Channel NewsAsia (very annoying popups)

From January 1, 46 shopping centres and convenience chains stop giving out single-use plastic bags
It’s slowly happening, but the out-cry over single-use plastics is gathering pace and some of the ‘big names’ are now changing their policies.
— The Thaiger

Vietnam, US ink $2.7 bln deals
Vietnam and the U.S. signed memorandums of understanding on major business deals worth $2.7 billion on Friday as the two countries seek to reduce the latter’s climbing trade deficit.
— VnExpress