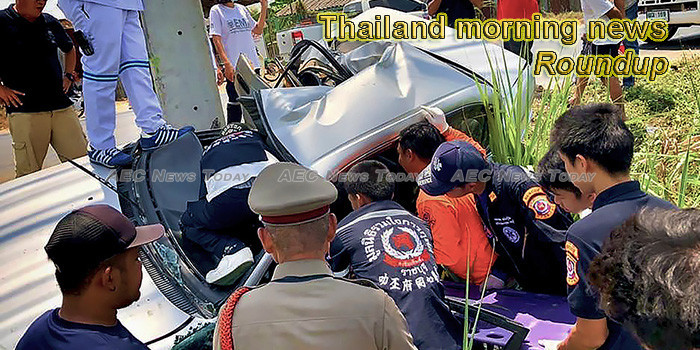 From January 1, 46 shopping centres and convenience chains stop giving out single-use plastic bags
It’s slowly happening, but the out-cry over single-use plastics is gathering pace and some of the ‘big names’ are now changing their policies.
— The Thaiger

Most reject skipping Loy Krathong to keep waterways clean: Poll
A majority of people reject a suggestion that Thais avoid floating krathongs — containers made of leaves but often including non-biodegrabale materials — during the traditional Loy Krathong Festival, and instead collect trash from rivers and canals, according to a survey conducted by Bangkok University, or Bangkok Poll.
— Bangkok Post

Army clarifies curfew rumours for districts in Southern Thailand
The army says now that won’t upgrade the curfew in the troubled deep South following an attack that killed 15 people on Tuesday night.
— The Thaiger

Cabinet to adopt development guideline for Dawei SEZ link
The National Economic and Social Development Council (NESDC) will ask the cabinet to adopt its guidelines on infrastructure development tomorrow, as the government seeks to start working on the long-awaited link that will connect the Dawei Special Economic Zone in Myanmar with Eastern Economic Corridor (EEC).
— Bangkok Post

Thailand chikungunya cases top 9,000, Up dramatically over recent years
The number of infections with the mosquito-borne viral infection, chikungunya, in Thailand has eclipsed the 9,000 case mark this week, according to the Thailand Bureau of Epidemiology.
— Outbreak News Today

Officer in krathong copyright entrapment case transferred
A police superintendent in the north east province of Nakhon Ratchasima has been transferred after a sting operation in which a 15 year old girl was arrested and fined 5,000 baht for alleged copyright infringement (the original demand by the ‘officer’ was much higher but was negotiated down).
— The Thaiger

Majority view Asean Summit as beneficial to Thailand: Poll
A large majority of people are of the opinion that Thailand has benefited from the 35th Asean Summit held in Bangkok on Nov 1-4, according to an opinion survey by Suan Dusit Rajabhat University, or Suan Dusit Poll.
— Bangkok Post

Great Joy and Expectation as Catholics in Thailand Await Pope’s Visit
Catholics form a tiny minority of Thailand’s over 68 million population, over 90% of which is Buddhist.
— Chiang Rai Times

Lingo class urged for Thai expat workers
The Labour Ministry wants those seeking job opportunities in South Korea to take advantage of free language classes in a bid to cut down on Thais working illegally in the country.
— Bangkok Post

Orange Line services ‘by 2023’
The Mass Rapid Transit Authority of Thailand (MRTA) is expecting to ask the cabinet to approve the western section of the MRT’s Orange Line by the end of next month, although opinions on construction methods and operating options are still divided.
— Bangkok Post

Korat water shortage ‘critical’
Like in other parts of this northeastern province, water shortage in three districts — Phimai, Chakarat and Huay Thalaeng — is now critical as the Lam Chamuak reservoir, their main source water, is drying up, according to local media reports.
— Bangkok Post

Key challenges for ASEAN’s next chair
It is a tradition for ASEAN’s 10 members to take turns chairing the regional bloc in alphabetical order, and come 1 January, 2020, Vietnam will formally take over from Thailand fully aware of the responsibilities it will have to shoulder.
— The Asean Post

Thailand hit by online fraud schemes with billions lost by savers looking for a quick buck
Thailand is reeling from a series of internet scams and pyramid schemes which has seen thousands of online users lose billions in get-rich-quick schemes that continue to find takers.
— ThaiExaminer.com

Encouraging Thais to stop using single use plastic bags
The Ministry of Natural Resources and the Environment has launched a campaign on Silom Road in the capital, promoting the initiative to reduce single-use plastic bags, and encourage members of the public to only float one biodegradable Krathong per household during the upcoming Loy Krathong festival, to reduce waste in canals and rivers.
— Newsline (video)

Farmers despair over chemical ban
Nakhon Ratchasima province is the country’s hub for cassava harvesting as at least 25% of all cassava yields come from this province alone.
— Bangkok Post

Finance Ministry to launch measures to stimulate real estate sector
As a New Year’s gift, the Ministry of Finance is planning to offer privileges to people interested in purchasing houses worth up to three million baht with a fixed interest rate of 2.5% for three years.
— Newsline (video)

Korean stab victim offers B100k for info on compatriot suspect
A young South Korean man who was found with multiple stab wounds after being attacked by a male compatriot in Pattaya last month has recovered and is offering a reward of 100,000 baht for information leading to the arrest of his attacker.
— Bangkok Post

E-commerce offers Thai small retailers big jump in reach and income
A SMALL Thai retailer who expands into online sales can boost takings by an average of 51 per cent a year, according to a new report released by an e-commerce platform provider.
— The Business Times

Thailand lose to China in SEA Games warm-up
An under-strength Thailand U23 side put in an impressive effort but still went down 2-1 to China U23 team in a warm-up game in Pathum Thani on Saturday night.
— Bangkok Post

Westerner may face 7 years in prison for yanking open aircraft door as it taxied for takeoff
A young western man could be facing up to 7 years in prison as Thai authorities take an increasingly serious view of an incident that occurred last Wednesday in Chiang Mai when he dramatically and violently opened an emergency exit of an aircraft as it taxied for takeoff on a flight to Bangkok.
— ThaiExaminer.com

Bangkok governor: One krathong per family
With the annual Loy Krathong festival coming up tomorrow, Bangkok’s governor is urging residents and tourists to help reduce the number of discarded krathongs and floating lanterns, according to Thai-language Daily News.
— The Thaiger

Energy Ministry plans E20 shift in early 2020
The Energy Ministry has set a time frame to transition to gasohol E20 as the primary petrol grade by early next year, while phasing out gasohol 91 to boost the value of commodity crops used in biofuel, says Energy Minister Sontirat Sontijirawong.
— Bangkok Post

Deputy Commerce Minister pledges to suppress activities of illegal copyright agents after 15 year old girl extorted over Krathongs
Deputy Commerce Minister Weerasak Wangsuphakijkosol, has visited Nakhon Ratchasima province and met with the 15-year-old girl student who had made Krathong vessels in the style of various cartoon characters like the Minion, Garfield, Angry Birds and Line bear and was falsely accused of copyright piracy.
— The Pattaya News

Thai Airways management ‘asked’, staff ‘told’, to cut expenses
Both management and staff likely to lose some entitlements under new policy to reduce costs In a move that will likely contribute little to the airline’s rehabilitation, Thai Airways is trying to reduce expenditures on staff travel.
— The Thaiger

Opinion: Prayuth’s War on ‘Fake News’ is Doomed to Fail
Five years of censorship and intimidating people from making critical political expression under the junta are now succeeded by a “truth center.”
— Khaosod English

Thaicom to exit 3400-3700MHz range
Satellite service provider Thaicom Plc has agreed to vacate the 3400-3700MHz spectrum range to free it up for auction to use for 5G wireless networks.
— Bangkok Post

Ranger stabbed by assailant linked to insurgents in Narathiwat
A paramilitary ranger sustained serious injury after he was stabbed by a man who tried, unsuccessfully, to seize his service rifle, and who was quickly subdued by another ranger.
— Thai PBS News

SC Asset campaigns around policy restraints
SET-listed developer SC Asset Corporation Plc is using a campaign to boost sales of completed condo units as the government’s property tax incentives effective from the start of this month do not apply because its units are priced above 3 million baht.
— Bangkok Post property

Commentary: Thailand hasn’t lost its lustre with travellers. There are many undiscovered sights
A recent news report suggests the trade war has had a huge impact on popular beach destinations like Phuket but now might be a good time to score a bargain trip to other, unseen parts of the country, says Termsak Chalermpalanupap.
— CNA

Loy Krathong around Thailand
Rivers, lakes and canals around the country will be illuminated by candlelight as Thais release a series of lotus-inspired floats in order to ask forgiveness from the Water Goddess for their infringements during the much-loved Loy Krathong Festival.
— Bangkok Post travel