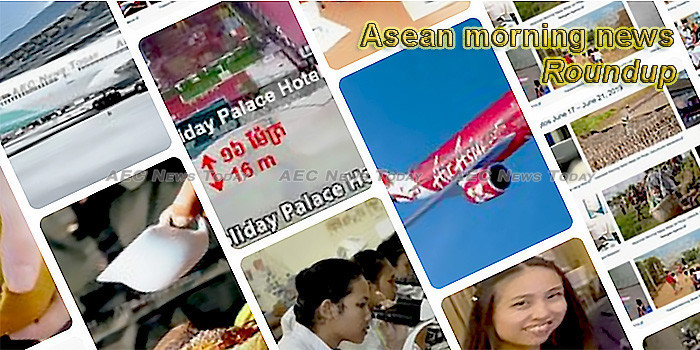 The US says China is blocking $2.5 trillion in South China Sea oil and gas
Tensions surrounding the South China Sea have always been largely about oil and natural gas.
— Quartz

Asean should guarantee safe return of Rohingyas to Myanmar
Asean has a lot of work to do for the sake of its own relevancy as Myanmar and Bangladesh make another attempt to repatriate thousands of Muslim Rohingyas to strife-torn Rakhine state.
— The Phnom Penh Post

Southeast Asia weaves Smart Cities Network
The 10 member states of the Association of Southeast Asian Nations (Asean) decided in this capital to prepare for the construction of a network of smart cities in the region.
— Prensa Latina

EU, Germany to provide $9M Asean fund
The EU and Germany have committed to help strengthen Cambodia’s economic integration with Asean member states by providing a €9.35 million ($10.5 million) fund to boost the Kingdom’s trade and investment in the region.
— The Phnom Penh Post

Commentary: Reborn from ashes of independence, Timor-Leste rebuilds 20 years on
This month, Timor-Leste is in a festive mood, celebrating the 20th anniversary of its independence referendum.
— CNA

ASEAN lawmakers: Free De Lima, drop charges vs opposition
Asian legislators as well as members of liberal and democratic parties in the region are seeking the release of jailed opposition Senator Leila de Lima and the dropping of “politically motivated” charges against other opposition leaders.
— Rappler

Establishment of ASEAN bamboo network endorsed at Iloilo congress
Environment officials, scientists, and researchers in Southeast Asia have agreed to establish a regional network that will explore the vast potential of bamboo for environmental sustainability and economic resiliency amid a changing climate.
— Manila Bulletin

Is China using ASEAN for its gambling fix?
While at first glance the news that China has asked the Philippines to ban online gambling may seem like just another sign of its growing involvement in the region, a quick scan of regional newspapers soon makes it obvious that the Asian superpower needs all the help it can get to battle its own gambling problem.
— The Asean Post

Cari: Asean should emulate China’s GBA eco-civilisation concept
I have recently been working in the Greater Bay Area (GBA), evaluating how the concept of the “eco-civilisation” — an objective of the Chinese central government — can be applied to the region, given the bold plans to leverage the strong blend of features the various cities in it possess.
— The Edge Markets

Official sacked for land grabbing
Ministry of Justice undersecretary of state, Seng Sovannara was sacked today after he was investigated by the Ministries of Interior and Environment over alleged land grabbing in protected areas in Mondolkiri province.
— Khmer Times

Why Indonesia Is Shifting Its Capital From Jakarta
Jakarta is soon to become an ex-capital city. Indonesia is planning to move its administrative headquarters from its richest island of Java to the forest island of Borneo.
— Bloomberg

Defense budget the biggest, mostly for personnel spending
The government has again increased the budget for the Defense Ministry, making it the ministry with the biggest budget allocation in the 2020 state budget.
— The Jakarta Post

Police chiefs to be removed for failure to handle forest fires: Minister
The government is ramping up efforts to prevent and douse forest and land fires amid close scrutiny from neighboring countries as the Indonesia is expecting the dry season to peak within the next two months.
— The Jakarta Post

Laos Troops Have Encroached on Cambodian Soil, Army Says
Laotian troops have been encroaching on Cambodian territory in the border province of Preah Vihear for more than a week, with Laos claiming the territory as its own, military officials said on Friday.
— VOD

Cambodia Playing up Border Tensions With Laos to Distract From Sam Rainsy Return: Analysts
Tensions along the border between Cambodia and Laos are likely being exaggerated by Cambodia’s government as part of a bid to distract the public from the impending return of acting opposition Cambodia National Rescue Party (CNRP) chief Sam Rainsy from self-imposed exile, analysts said Friday.
— RFA

Banks, military are main buyers of government debt
A senior Central Bank of Myanmar (CBM) official said an average of 97 percent of the auction of government debt papers is sold to a group of local banks as well as the CBM and MEHCL. “CBM and MEHCL always purchase major portions of the debt issued,” the official added.
— Myanmar Times

Beijing not likely to change position on South China Sea – Chinese foreign ministry spokesman
Beijing’s position on the South China Sea arbitration ruling “has not changed a bit” even if President Rodrigo Duterte intends to raise the issue when he meets with Chinese President Xi Jinping during his official visit to Beijing this week.
— Manila Bulletin

21% more mosquito breeding habitats destroyed in 2018 through use of Gravitrap system
The National Environment Agency (NEA) on Friday (Aug 23) said that its Gravitrap system – which is designed to attract and trap female Aedes mosquitoes looking for sites to lay their eggs – enabled it to detect and destroy 21 per cent more breeding habitats in 2018 compared to the previous year.
— Channel NewsAsia (very annoying popups)

Thailand to roll out plastic bag-gobbling robots
Thailand’s Department of Marine and Coastal Resources is developing an AI robot to trap debris before it reaches the sea so as to prevent loss of marine life to plastic bags.
— SGGP

Vietnam to see strong growth in 2019, unlikely to face US tariffs: reports
VIETNAM is expected to be one of the world’s fastest growing economies in 2019, and a key destination for manufacturers relocating due to trade tensions between the United States and China, said UOB economists in a report last week.
— The Business Times