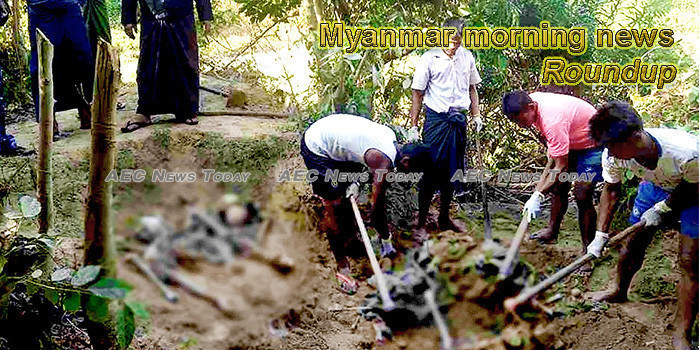 Banks, military are main buyers of government debt
A senior Central Bank of Myanmar (CBM) official said an average of 97 percent of the auction of government debt papers is sold to a group of local banks as well as the CBM and MEHCL. “CBM and MEHCL always purchase major portions of the debt issued,” the official added.
— Myanmar Times

Myanmar army warns of full-scale war in Shan State
The Myanmar military accused an ethnic armed group operating in Myanmar’s northeastern Shan state of terrorism and drug trafficking, and warned of all-out war, according to a report by RFA on 23 August.
— BNI Online

Recovery of loans by banks may give trouble to top businessmen, businesses
Zaykabar Khin Shwe said that top business tycoons and businesses would be in trouble if the banks asked them to pay back loans that they lent to businessmen and construction companies by the end of September.
— Mizzima

Border trade disruption could last a while
Trade disruption from recent attacks by armed groups along the Myanmar-China border may last longer than the attack on the 105th-mile camp that occurred in late 2016.
— Myanmar Times

International drug lord from Myanmar held from Imphal Airport
Despite crackdowns against illicit drugs by government agencies in Manipur, trafficking of contraband goods goes undeterred and is on upward trend in Manipur.
— Morung Express

Dhaka must mobilise opinion for Myanmar’s accountability
EFFORTS to repatriate the Rohingyas after their large-scale influx into Bangladesh from Rakhine State in Myanmar beginning on August 25, 2017 have faltered twice — now on August 22, 2019 and earlier on November 15, 2018.
— New age bd

Atrocities in Rakhine: Rohingyas call for justice
Thousands of Rohingyas yesterday rallied in the refugee camps in Cox’s Bazar, urging the international community to ensure justice for the atrocities the Myanmar military committed against them.
— The Daily Star

US pushes for action, accountability
The United States has called upon all those involved in Myanmar to respect human rights, allow unhindered humanitarian access, and engage in political dialogue to pursue peace.
— The Daily Newnation

It’s Time to Indict Aung San Suu Kyi for Genocide Against the Rohingya in Myanmar
ISN’T IT TIME Nobel Peace Prize laureate Aung San Suu Kyi was indicted for war crimes and genocide at the International Criminal Court?
— The Intercept

The Minister says military and economic competition of China and India interconnect military activities of AA
U Soe Htet, a minister of municipalities and spoke person of Chin State, told to media the construction of comprehensive project of Kalardan Port which became the main route of economic and military of India and China and with regard to the project, the activities of AA had been supported by both countries at the news conference.
— BNI Online

Rohingya refugees protest exodus, demand rights in Myanmar
The repatriation deal is based on an understanding that the return has to be “safe, dignified and voluntary.” The refugees also insisted on receiving Myanmar citizenship and other rights, which the Buddhist-majority nation has refused to grant so far.
— The Hindu

Do Myanmar’s Generals-Turned-Politicians Have a Plan B for the Presidency?
Before he voluntarily retired in 2011, Senior General Than Shwe, the chief of Myanmar’s then-ruling junta, laid out a master plan for the country’s immediate political future. Today, he must be less than satisfied, as that plan has yet to be realized.
— Irrawaddy

Myanmar ‘Has No Fourth Estate’, Mandalay Chief Minister Says of Media’s Role
In an apparent snub to Myanmar’s media, the chief minister of Mandalay Region said on Friday that he only knew of three pillars of democracy—the legislature, the administrative branch and the judiciary—prompting criticism from the country’s media organizations.
— Irrawaddy

More poultry breeders adopt modern methods
Some poultry breeders have changed their methods, and are using modern cold storage and factories due to increased foreign investment and global warming, U Kyaw Htin, chair of the Myanmar Livestock Federation, said on Wednesday.
— Myanmar Times

For Myanmar, too much impunity and too little accountability
TWO YEARS AGO this weekend, the military in Myanmar began a campaign of ethnic cleansing in Rakhine state against the Rohingya Muslim minority.
— Washington Post

UN expert: No peace in Myanmar if no military prosecutions
A member of the UN Independent International Fact-Finding Mission on Myanmar warned Friday that there will be no long-term peace in the country and no return of Rohingya refugees unless there is accountability for the “brutality” of Myanmar’s military forces.
— EasternMirror Nagaland

Inaction on China and India’s crimes emboldens Myanmar
On August 25, Rohingya refugees and survivors in refugee camps, as well as their diasporic communities, commemorate the second Rohingya Genocide Memorial Day. On this day two years ago, a new campaign of genocidal violence was launched by the Myanmar military against the Rohingya.
— Aljazeera

Japan continues to help Myanmar whitewash the Rohingya crisis
Braving the sweltering summer heat, more than 100 businesspeople gathered in central Tokyo on Aug. 6 to get the latest update on Myanmar’s economy.
— The Japan Times

Cartoonists raise money for flood relief
Every year Myanmar faces serious problems with flooding and this year Mon State was particularly badly hit by flooding and landslides, incidents that killed many people.
— Mizzima

Asean should guarantee safe return of Rohingyas to Myanmar
Asean has a lot of work to do for the sake of its own relevancy as Myanmar and Bangladesh make another attempt to repatriate thousands of Muslim Rohingyas to strife-torn Rakhine state.
— The Phnom Penh Post

The right to community forest in Tanintharyi Region
A community forestry scheme introduced by the military junta has allowed some communities to preserve traditional livelihoods, but heavy-handed government control and bureaucratic delays have stymied potential progress.
— Frontier Myanmar

H1N1 death toll hits 102
Till August 23, the number of H1N1 death toll reached 102 with the additional deaths in Bago, Magway and Ayeyawady, according to the figures from the Ministry of Health and Sports.
— Eleven Myanmar

In tracking cause of hog deaths, govt urged to test imported feeds
THE Philippine Maize Federation Inc. (PhilMaize) has urged the government to conduct laboratory tests on imported feed products to ensure these goods were not contaminated with animal virus, and rule out the possibility that they caused the unusual deaths of hogs recently.
— Business Mirror