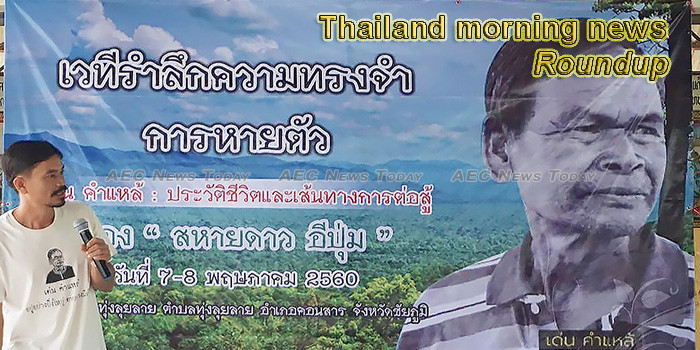 Thailand to roll out plastic bag-gobbling robots
Thailand’s Department of Marine and Coastal Resources is developing an AI robot to trap debris before it reaches the sea so as to prevent loss of marine life to plastic bags.
— SGGP

Thailand extends emergency decree in the south
The government’s emergency situation committee on August 23 agreed to extend the enforcement of an emergency decree on public administration in the deep South for another three months, said a senior security official.
— Vietnamplus

Dugong deaths spark calls for plastic ban
Environmentalists have united in their calls for the government to take decisive action, including an across-the-board ban on single-use plastic bags, to mitigate the increasingly severe harm plastics are causing to the environment and sea lives.
— Bangkok Post

MOPH to make Thailand ASEAN’s top herb exporter
In the past year, the Thai herbal market has grown by more than 30 percent, with exports reaching 2.24 billion baht.
— NBT World (video)

Thailand Wants to Be Southeast Asia’s Power-Trading Middleman
Thailand is jump starting a decades-old plan to create a Southeast Asia electricity super-grid, and wants to be the power-trading hub at the center of it.
— The Edge Markets

Red-shirt trio to pay B19m in damages
Red-shirt co-leaders Jatuporn Prompan, Nattawut Saikuar and Arisman Pongruangrong have been ordered by the Supreme Court to pay damages worth 19 million baht plus interest caused by an arson attack at a building in Bangkok during the red shirt protest in 2010, according to Democrat Party spokesman Rames Ratanachaweng.
— Bangkok Post

New fund replacing LTFs starts to take shape
The Finance Ministry has agreed to launch a new tax-saving fund to replace long-term equity funds (LTFs), for which the tax incentive is due to expire at the end of this year.
— Bangkok Post

Dept of Fisheries, Germany educate Thai fishermen
Even though Thailand has successfully been dealing with illegal, unreported and unregulated fishing (IUU), the Thai government is moving forward to bringing sustainability to the country’s fisheries sector.
— NBT World (video)

25th TITF to generate 400 mil in cashflow
Those looking for a tour package or a travel promotion don’t want to miss this event “Thai International Travel Fair (TITF) 2019” which is expected to generate a cashflow of 400 million baht.
— NBT World (video)

Hoteliers uneasy over Northeast drought
The prolonged drought, especially in the Northeast, has raised concerns among local hoteliers about a possible shortfall of water for consumption in the industry.
— Bangkok Post

Lending guidelines planned to reduce Thailand’s household debt
Thailand’s commercial banks have recently agreed, in principle, with the Bank of Thailand to set lending guidelines by limiting a borrower’s debt-to-service ratio (DSR) to 70%, for thosethose earning up to Bt30,000 per month, in an effort to fix expanding household debt, which is regarded as risk to overall financial stability.
— Thai PBS News

Ombudsman to rule on the matter of PM’s incomplete oath next Tuesday
The Ombudsman is expected to rule next Tuesday on whether Prime Minister Prayut Chan-o-cha breached the Constitution by failing to recite the oath in full during the swearing-in ceremony in front of His Majesty the King in July, said Mr. Raksakecha Chaechai, secretary-general of the Ombudsman’s Office, on Saturday.
— Thai PBS News

Korat dorms hit hard by drop in university enrolment
NAKHON RATCHASIMA: Operators of dormitories say their businesses have been severely affected by a sharp drop in the numbers of students entolled at universities in the past few years.
— Bangkok Post

Farmlands flooded in Mukdahan from mountain run-off
Some 10,000 rai of farmland and a main road have been inundated with run-off from mountains in Mukdahan, north-east Thailand near the Laos border and Mekong River.
— The Thaiger

SEC warns over crypto trader investment scams
The Securities and Exchange Commission’s (SEC) is warning over a new form of investing scam, in which victims are lured into investing with websites claimed to be legal digital currency traders operating overseas.
— Bangkok Post

Airports of Thailand block entrance to new Central Village at Suvarnabhumi
Please be seated and fasten your seat belts due to severe turbulence at the front of the almost-open Central Village “luxury outlet” shopping area next to Suvarnabhumi airport in Bangkok.
— The Thaiger

Justice Minister Somsak says he won’t resign as an MP
In apparent defiance of Deputy Prime Minister Prawit Wongsuwan, Justice Minister Somsak Thepsuthin announced Friday that he would not quit as a Palang Pracharat party-list MP, claiming that, by retaining his parliamentary membership, he would be able to perform his duties and to reach out to his constituents more efficiently.
— Thai PBS News

The peril on Thai pavements
A video clip of a Japanese woman blocking motorcycles from riding on the pavement has once again reminded society about the state of Thailand’s shared public spaces.
— Bangkok Post

Thai spikers lose to young Japan in Asian final
Thailand came up short on Sunday as the team lost to their rival Japan in the 2019 Asian Women’s Volleyball Championship in Seoul.
— Bangkok Post

Tourism Authority of Thailand Governor meets with local Pattaya leaders over extending legal nightlife closing times-Special Report
Yesterday afternoon at around 3:00 PM at City Hall in Pattaya the governor of the Tourism Authority of Thailand (TAT) met with local police, immigration, tourist police, media and a collection of local business owners and alcohol control group representatives to discuss the proposal of extending legal closing hours for nightlife in Pattaya.
— The Pattaya News

Opposition Says ‘Buddhist Party’ Move to Prayuth Unconstitutional
A pledge by an MP to dissolve his own party and transfer the votes he received at the poll to the government coalition was met with doubts and criticism on Friday.
— Khaosod English

Phuket’s water bosses claim there will be enough water
Well into the second half of the Phuket wet season and the three main dams are well below capacity, Bang Wad Dam just over 13% capacity and the Bang Neow Dam in Thalang district around 5%, mostly unusable muddy ponds.
— The Thaiger

Finance Ministry takes regional approach
Finance Minister Uttama Savanayana has instructed the ministry to tailor solutions for each portion of the country to solve poverty and income inequality.
— Bangkok Post

Officials boost trade events
The Commerce Ministry is ramping up business matching activity and trade fairs for potential growth products in cosmetics, healthcare and education in an effort to increase shipments.
— Bangkok Post

SOEs pushed to mobilise public funds
The Highways Department is expected to raise 40-50 billion baht from the issuance of the second lot of the Thailand Infrastructure Fund (TFFIF).
— Bangkok Post

‘Are We Not Human?’: Future Forward MP Weeps as Gender Committee Voted Down
A Future Forward MP broke down in tears after a bid to establish a committee on gender diversity was voted down by the Lower House on Thursday.
— Khaosod English

Thai bus travels ‘sideways’ along north-east highway
A bus, making its way from Nakhon Ratchasima, to Udon Thani, has surprised the passengers in the car behind.
— The Thaiger

60 million baht of gold stolen in Songkhla heist
Five people have robbed a gold shop in the city centre of Na Thawee district in Songkhla province yesterday (Saturday).
— The Thaiger

Vietnam versus Thailand – which is the best for travel or living?
They are both beautiful countries and stand out amongst their south east asian counterparts for their food, culture and scenery. But which one is your choice for travelling or living in?
— The Thaiger

600 monkeys in Hua Hin to be sterilized to control population
Thailand’s National Parks, Wildlife and Plant Conservation Department has launched a program to sterilize 600 long-tailed macaque monkeys in the Khao Takiab and Khan Hin Lek Fai hills, in the seaside town of Hua Hin, in an effort to keep the ape population at a manageable level.
— Thai PBS News