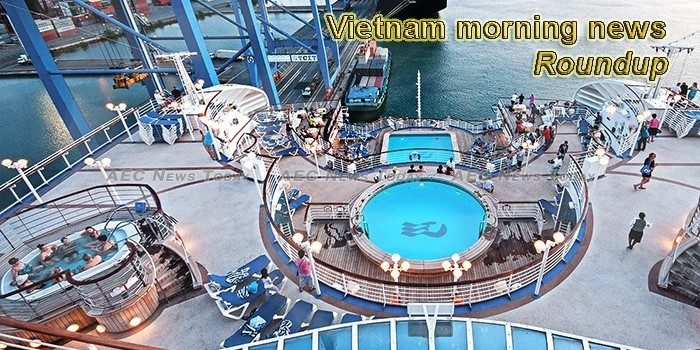 Vietnam eyes $2.4 bln upgrade to all civilian airports
Vietnam’s airport operator has recommended a VND56.7 trillion ($2.4 billion) upgrade of 16 of the 21 civilian airports in the country.
— VnExpress

New decree removes barriers for rice exporters
According to a new governmental decree, rice-exporting businesses will no longer be required to own rice storage, paddy milling and grinding facilities with processing capacities of 5,000 tonnes of rice and 10 tonnes of paddy per hour, respectively.
— Bizhub

Vietnam Gives Go-Ahead For Formula One Grand Prix On The Streets Of Hanoi
The Vietnamese government has said it supports the idea of staging a Formula One race on the streets of the capital Hanoi, Reuters reported, refering to an official of the country’s government office.
— Investvine

Vietnam Social Security collects over US$8.66 billion in 8 months
Spending on social, health and unemployment benefits hit a total of VND202 trillion (US$8.65 billion) in the January – August period, or 68.61% of the year`s target.
— The Hanoi Times

Banks to work harder on cyber crime
Cyber security is a hot issue globally. In Viet Nam, concerns on the subject have been expressed by the Government and departments, especially in the field of banking – finance, said Le Manh Hung, director of the State Bank of Viet Nam’s Information Technology Department.
— Bizhub

South Korea and Japan retailers post contrasting business results in Vietnam
Foreign companies now take 50% of the market share in Vietnam`s retail sector and the figure is forecast to rise in the coming time.
— The Hanoi Times

Vietnam expects 2018 credit growth target to hover around 17%
Despite the credit growth limit, it is vital to ensure sufficient capital for business and manufacturing with stable interest rates, stated Mai Tien Dung, minister and chairman of the Government Office.
— The Hanoi Times

Over 3,800 business conditions expected to be cut and simplified
Ministries and sectors are planning to reduce and simplify over 3,800 business conditions of the more than 6,200 in total, equivalent to 61.3% and exceeding 11.3% compared to the requests made by the Government and the Prime Minister, according to the PM’s working group.
— VietnamNet Bridge

South Korea hungry for Vietnamese garment
Viet Nam expects to continue growth of textile and garment exports to South Korea by the end of the year after strong results in the first seven months of 2018, according to the General Department of Customs.
— Bizhub

1,200 enterprises to attend Vietnam Business Summit in Hanoi
The event is in the framework of World Economic Forum on ASEAN (WEF ASEAN) 2018.
— The Hanoi Times

EU criticises Vietnam for human rights breach
The EU Delegation notes the recent sentencing of Mr Le Dinh Luong under the national security provisions of the Penal Code to 20 years in prison, followed by five years of probation which follows the negative trend of repression against peaceful activists in Vietnam.
— ScandAsia

Vietnam’s centuries-old town is where to go on your gap year
Many travelers are taking a gap year to exotic parts of the world and they have expressed big interest in Vietnam’s Hoi An ancient town, a UNESCO recognized world cultural heritage site.
— VietnamNet Bridge (video)

Vietnam seeks multilateral trade cooperation at AEM-50
Minister of Industry and Trade Tran Tuan Anh met with his counterparts from Singapore, Indonesia and the Republic of Korea on the sidelines of the 50th ASEAN Economic Ministers (AEM-50) Meeting and Related Meetings held in Singapore from August 29 to September 2 to discuss bilateral and multilateral trade cooperation.
— VietnamNet Bridge

Philippines Morning News For May 22