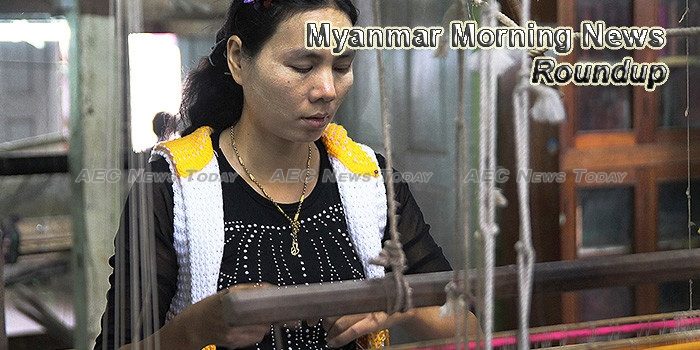 We must stop training Myanmar’s military
Some 370,000 Rohingya Muslims have fled Rakhine state in Myanmar for Bangladesh since the outbreak of violence last month, with whole villages being burned down and the government accused by the UN of ethnic cleansing.
— The Guardian

Myanmar permanent representative to UN strongly objects to ZeidRa’ad Al Hussein’s remark on ‘Crimes Against Humanity’ and ‘Ethnic Cleansing’ in Rakhine
Htin Lin, Myanmar permanent representative to United Nations, totally objected to the remark of ZeidRa’ad Al Hussein, Office of the High Commissioner for Human Rights of United Nations on ‘Crimes Against Humanity’ and ‘Ethnic Cleansing’, reported the Ministry of Foreign Affairs on September 13.
— Eleven Myanmar

Rakhine violence not expected to affect economy or FDI
Concerns that the ongoing violence in Rakhine State could result in capital outflows and economic sanctions are rising in the investor and business community.
— Myanmar Times

Solution lies in Myanmar
This is with reference to the statement of the United Nations High Commissioner for Human Rights that “India cannot carry out collective expulsions, or return people to a place where they risk torture or other serious violations”.
— Business Standard

Govt to invest in Ayeyawady firms: minister
The Myanmar Economic Bank will not only provide loans for startups but also give them land if necessary, according to Minster for Planning and Finance Kyaw Win.
— Eleven Myanmar

Farmers decry confiscation of land for civil servant housing project
Farmers in a village in Dagon Seikkan township in Yangon decried the government’s decision to convert their 183 acres of farmlands into a housing project for retiring government workers.
— Myanmar Times

UN seeks ‘massive’ help for Rohingya fleeing Myanmar ‘ethnic cleansing’
The United Nations appealed on Thursday for massive help for nearly 400,000 Muslims from Myanmar who have fled to Bangladesh, with concern growing that the number could keep rising, unless Myanmar ends what critics denounce as “ethnic cleansing”.
— Nikkei Asian Review