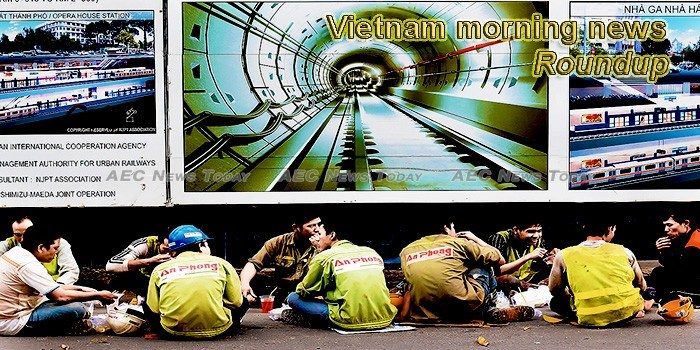 Vietnam’s first automaker is quickly getting ready to debut a sedan and a SUV
It was once one of the most dangerous waterways in the world, heavily mined and bombed during the final stages of the Vietnam War, but today, Haiphong Harbor has become the heart of the country’s economic boom.
— CNBC

Updated import regulations to increase trade
The application of a customs bond model would benefit the country, contributing to an increase of one per cent of the total import-export turnover according to comments by Minister and Chairman of the Government Office Mai Ti?n Dung.
— Viet Nam News

“Invisible tariff” in Vietnam reaches 164%: expert
Trade costs in developing countries remain high, mainly due to administrative procedures, according to expert of the Global Alliance for Trade Facilitation (GATF) in Vietnam cited by the government portal.
— The Hanoi Times

Vietnam Railways reports 20% falls in profit in Jan – Jun
The railway sector is under fierce competition from road and air transport.
— The Hanoi Times

Vietnam’s capital to improve residents’ height
Vietnam’s Hanoi capital will spend over 363 billion Vietnamese dong (some 15.8 million U.S. dollars) in the 2018-2025 period implementing nutrition and sport programs to increase its residents height, according to the municipal Health Department on Monday.
— Xinhua

Vietnam spends over US$6.5 billion paying debts in 8 months
In August, Vietnamese government signed a loan agreement worth US$150 million, taking the total number of loan agreements in eight months to 10 with a value of US$1.13 billion.
— The Hanoi Times

Vietnam Allows Direct Payment in Yuan Rather Than Dollars for China Border Trade
Beginning October 12, Renminbi (RMB) (also called Yuan), the official currency of China, can be used directly in some border trade between China and Vietnam, according to a notice from the State Bank of Vietnam on August 28.
— Seafood News

No call for US to fret over Vietnam trade surplus
The U.S. shouldn’t be concerned about its current trade deficit with Vietnam, Deputy PM Trinh Dinh Dung said Monday.
— VnExpress

VAMC plans to resolve $5.95b of bad debts by 2020
The Viet Nam Asset Management Company (VAMC) plans to resolve at least VND140 trillion (US$5.95 billion) of non-performing loans (NPLs) from now until 2020, of which VND34.5 trillion will be settled this year.
— Bizhub

Uber dispute ends as firm pays back taxes, fines
A HCMC taxman has confirmed that ride hailing firm Uber has paid all its outstanding dues.
— VnExpress

Vietnam-Russia Military Ties: Look Beyond the Billion Dollar Boast
A closer look at the broader significance of a longstanding defense relationship.
— The Diplomat