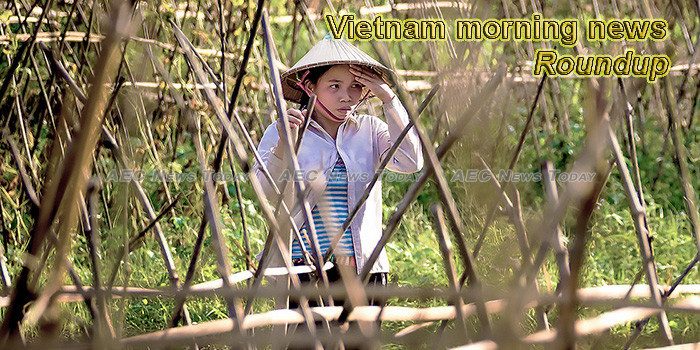 Vietnam Airlines reaches top 10 best enterprises in VN
Vietnam Airlines was named in the top 10 best performing companies for the third consecutive year. The firm was included in the ‘Top 50 Vietnam The Best’ by the VNR500 Ranking, which ranks the top 500 largest businesses in the country and is compiled by Việt Nam Report in co-operation with VietNamNet newspaper.
— Vietnam News

Vietnam – attractive country for investment in 2019
Vietnam is one of the highest country’s GDP growth globally. According to the General Statistics Office (GSO), Vietnam’s 2018 GDP growth reach 7.08%, much higher than government’s target and consensus expectations. The growth is forecasted to slow down in 2019, reaching 6.7%, however, still higher than the average global GDP growth which will reach 3.54% in 2019 according to OECD.
— Vietnam Insider

Vietnam central province to get $600-million port
The deep-water port, to be built by My Thuy International Port JSC (MTIP), a joint venture between several construction companies, will be built in three stages over 18 years.
— VN Express

“Most of Vietnam’s coconuts serve the Chinese market”
The dry season is getting close for the Vietnamese coconut growers. This is a time where production decreases for a couple of months, but there will still be enough to supply both the Chinese and the domestic market.
— Fresh Plaza

Localities told to collect data for national digital map
All provinces and cities in the country need to finish collecting data on local addresses by the end of January so that Việt Nam’s digital map project on map.itrithuc.vn can be operational by February.
— Vietnam News

Hanoi hosts dialogue to find solutions for combating plastic pollution in East Sea
According to the United Nations’ report, the amount of plastic waste discharged every year is enough to circle the earth four times.
— Vietnam Net

Directive highlights denouncer protection
The Politburo has issued a directive on enhancing the Party’s leadership in protecting those who detect, denounce and fight corruption, wastefulness and wrongdoings.
— VNA NET

Enterprises race to recruit workers for Tet holidays
As the Lunar New Year (Tet) holiday is approaching, many companies have high demand for short-term employers, with some wiling to pay them up to 1 million VND (43 USD) per day.
— VNA NET

Can Tho works to raise public awareness of air pollution
Leading officials of the Mekong Delta city of Can Tho met on January 16 with a delegation from the World Health Organisation (WHO) in Vietnam to discuss a campaign to raise awareness of the impact of air pollution on the climate and public health.
— VNA NET

Bến Tre promotes products in HCM City
The first Bến Tre One Commune, One Product Fair in HCM City will be held at Big C An Lạc supermarket in Bình Tân District from January 24.
— Vietnam News

HCM City primary schools lack classrooms
Increased population growth has led to a lack of classrooms and failure to meet the national standard of 35 children or less per classroom at primary schools in HCM City, educational officials have said.
— Vietnam News

Bitter pill to swallow for pharmaceutical investors
Pharmaceutical stocks could be a bad bet this year, as the firms are set to report slower earnings growth for 2018.
— Vietnam News

Water puppetry to highlight Vietnamese art at int’l festival
Vietnamese water puppetry will represent the national performing arts at the International Theatre Festival of Kerala (ITFoK), which will be held from January 20 to 26 in India.
— VNA NET

Mekong Delta firms urged to sell to Japan
Mekong Delta firms should make use of the Comprehensive and Progressive Agreement for Trans-Pacific Partnership (CPTPP) to do more business with Japan, experts told a conference in Cần Thơ city.
— Vietnam News

Việt Nam in need of new energy
Việt Nam should have ample motivation to exploit new and clean energy to ensure energy security and address environmental issues. Former US Secretary of State John Kerry spoke at a press conference on the issues.
— Vietnam News

Vietnam to reopen controversial tollgate on southern highway
The fee for cars under 12 seats and trucks under two tons will be reduced from VND35,000 ($1.51) to VND15,000, the Directorate for Roads of Vietnam under the Ministry of Transport has decided.
— VN Express

Year of the PIG, say it with Flowers
There’ll be pigs aplenty on the streets of Việt Nam as the country gets set to start the Year of the Pig. On HCM City’s Nguyen Huệ Street, preparations are underway to turn the road into a sea of flowers, but it’ll be the pigs hogging all the limelight.
— Vietnam News