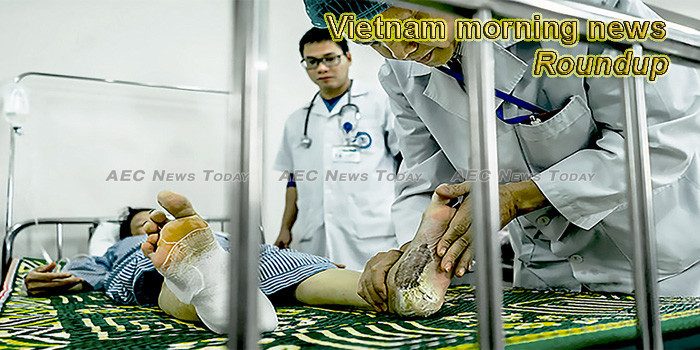 Vietnam’s New Bamboo Airways Can Finally Take Off
Vietnam’s Ministry of Transport on November 12 officially granted an aviation business license to Bamboo Airways, the latest airline in the country to take to the skies. The airline now plans to make its maiden flight before the end of this year.
— Investvine

New aviation decree to ease burden for firms
A Governmental decree drafted by the transport ministry to simplify business conditions for potential investors in the aviation sector has been sent to Prime Minister Nguyen Xuan Phuc for approval.
— Bizhub

VN maintains tariffs on steel imports
Viet Nam’s Ministry of Industry and Trade (MoIT) on Monday released a decision to maintain anti-dumping duties on H-shaped and coated steel products imported from China and the Republic of Korea.
— VietNamNet Bridge

Vietnamese banks race to end cross-ownership to obey law
The State Bank of Vietnam (SBV) expects to put an end to cross-ownership in the banking system by 2020.
— The Hanoi Times

Measures to promote sustainable exports of wood and forestry products
The export value of wood and forestry products reached over US$7.6 billion in the first 10 months of the year, a year-on-year increase of 16.12% and accounting for 23.375 of the total export turnover of agriculture, according to the Vietnam Timber and Forest Product Association (Vifores).
— Nhan Dan Online

Vietnam taps opportunities to thrust exports to US
The US is the largest export market of Vietnam, with export turnover hitting 39 billion USD in the first ten months of 2018, representing a year-on-year increase of 12.8 percent.
— VietnamPlus

Hanoi looks to non-smoke tourism
The Hanoi Tourism Association has been working to promote a smoke-free environment in restaurants, hotels and tourism spots in the capital city.
— Vietnam Insider

More than half of German businesses wish to expand investment in Vietnam
54% of German companies wish to expand their business in Vietnam over the next 12 months and 52% want to hire more employees for their factories, according to a survey announced by the Delegate of German Industry and Commerce in Vietnam (GIC/AHK Vietnam).
— Nhan Dan Online

Vietnam to attend world’s largest food, beverage expo in UAE
As many as 20 Vietnamese enterprises operating in the agro-fishery-forestry, processed food and beverage sectors will attend the 24th edition of Gulfood, the world’s largest annual food & beverage trade exhibition, in the United Arab Emirates from February 17-21, 2019.
— VietnamPlus

Major SOEs transferred to state capital management committee
The Committee for Management of State Capital at Enterprises (CMSC) and the two Ministries of Finance and Information and Communications reached deals on November 12 to transfer the ministries’ right to represent the owner of State capital at their firms to the CMSC.
— Nhan Dan Online

Viet Nam climbs list of attractive countries for expats: survey
This year Viet Nam has increased its ranking from 23rd to 19th among countries where expats are eager to live and work in HSBC’s annual Expat Explorer survey.
— Bizhub

Central province to pilot ‘green’ energy for fishing boats
The central district of Núi Thành in Qu?ng Nam Province, in co-operation with SolarBK Holdings, has commenced a pilot project to develop a solar power system for its off-shore fishing fleet to supply ‘green’ energy for use during long trips.
— Viet Nam News

SCIC, MobiFone, Vietnam Airlines handed over to “super committee”
The transfer of Vietnam’s major SOEs to the commission is a necessary move in improving the corporate governance of state firms.
— The Hanoi Times

How Line is nurturing Vietnam’s engineering community
In September, more than 50 senior software engineers gathered at the Tech Hub at Vietcapital Building in Ho Chi Minh City, Vietnam. The occasion? Line, which is known for its messaging app, hosted its first developer meetup in the country.
— Tech in Asia

FDI firms with suspected losses put under close control
Approximately 50-60 percent of total FDI firms reported losses, meaning they didn’t have to pay CIT, while revenues from the FDI sector had been growing strongly.
— The Hanoi Times

Vingroup dives into pharmaceuticals with 11 VinFa stores
With a series of locations in trade centers and large-scale urban areas, VinFa promises to become a heavy-weight competitor of Mobible World and FPT Retail in the pharmaceutical industry.
— Vietnam Insider