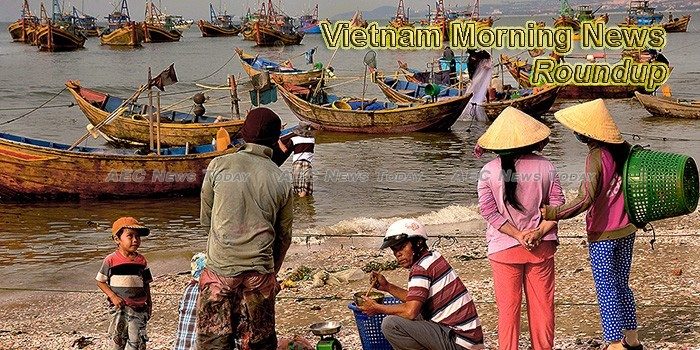 US steel producers request probe into Vietnamese products
Some US steel producers have lodged a request to the Department of Commerce (DOC) to ask for investigations into and application of preventive measures against the avoidance of paying anti-dumping tax and anti-subsidy tax on corrosion-resistant carbon steel imported from Vietnam.
— VietNamNet Bridge

New policies to make Vietnam’s wind power more attractive to investors
The Ministry of Industry and Trade is studying to issue new policies on the wind power development to make it more attractive as the current low feed-in-tariff (FIT) regulation is hindering investors from pouring capital into this industry.
— The Hanoi Times

Shortage of nuts forces VN cashew plants to shut up shop
CASHEW nut processing plants have halted operations due to a lack of raw materials, the Vietnam Cashew Nut Association (Vinacas) has announced, while urging shell-shocked processors to stay calm in the face of price fluctuations on the world cashew market.
— The Nation

HCM City plans to become regional trade hub by 2025
The HCM City Department of Industry and Trade yesterday unveiled a master plan for the trading sector until 2025 which seeks to soon make the city a key regional hub.
— Bizhub

Vietnamese banks boost IT use
Vietnam has big potential in applying 4.0 technology to develop retail banks and payment utilities.
— VietnamPlus

Vung Tau failing to lure tourists
Despite Vung Tau’s great tourism potential, not much investment has been made in tourism-related facilities and attractions.
— Bizhub

Vietnam longs for investments from the US, EU
Investments from the US and EU bring modern technologies and high economic efficiency as their projects are in the fields of renewable energy, IT, education, healthcare, service, finance & banking, transport and tourism.
— VietNamNet Bridge

New capital inflows are targeting Vietnam
New foreign investments into Vietnam through the initial public offerings (IPOs) of both state-owned and private enterprises have helped Vietnam continuously have a net foreign inflow to date this year despite adverse impacts from the global market.
— The Hanoi Times

22 more people arrested for investigation into disrupting public order in Vietnam
Some of the accused told the police they’d been given money to participate in the protests.
— VnExpress

Dong Thap strives to turn mango into key export product
The Mekong Delta province of Dong Thap, the largest mango producer in the region with 9,200 hectares of mangos and a annual output of nearly 100,000 tonnes, is working to turn mango into a sustainable hard currency earner by 2020.
— VietnamPlus

HIGG index to boost VN textiles
The Viet Nam Textile and Apparel Association, Sustainable Apparel Coalition (SAC) and TAL Group have decided to introduce the application of HIGG index in the textile and garment industry.
— Bizhub

Vietnam becomes connected
According to a Financial Times article, Vietnam cyber security law is set to restrict Facebook and Google in their nation. Unfortunately, the obvious outcome is that this new cyber security law stands to hurt investors’ confidence and stunt the growth of Vietnam’s digital economy.
— Dhaka Tribune

Kim courts China but finds his economic muse in Vietnam
North Korean leader Kim Jong Un’s flurry of diplomacy continued this week with his third visit to China in as many months.
— Nikkei Asian Review (paywall)

World Cup gamblers descend on pawnshops
Football fans who have lost money betting on the World Cup have been rushing to pawnshops to take out loans or pawn their belongings.
— Viet Nam News

Forum focuses on smart tourism
The arrival of the internet of things (IoT) and inter-connectivity of devices has already substantially changed tourism and led to the development of smart tourism, experts have said.
— Bizhub