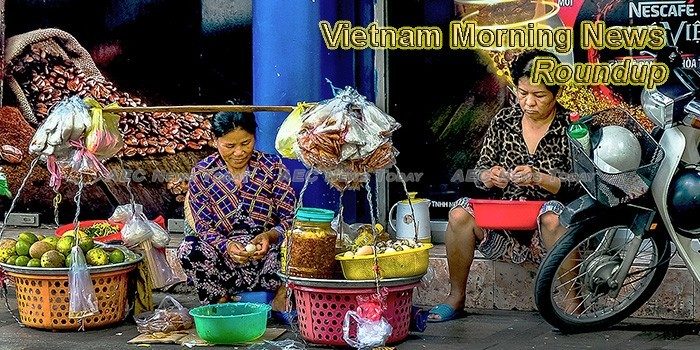 Hanoi licenses US$17.5 billion projects, pledges more business-friendly policies
The Hanoi government will grant investment licenses to projects worth more than US$17 billion on Sunday morning while vowing to issue more incentives to make it a business-friendly destination.
— The Hanoi Times

Thousands of containers lying at Vietnam’s seaports
Thousands of containers containing recyclable and used materials are piling up at seaports in the localities of Hải Phòng, HCM City and Bà Rịa–Vũng Tàu, reducing the productivity and efficiency of ports’ operations and negatively affecting the import-export activities of Vietnamese enterprises.
— Hellenic Shipping News

Fertiliser stocks shoot up due to VAT change
Fertiliser stocks are surprising the market with many large names hitting the ceiling prices, mainly due to the Ministry of Finance’s decision to make fertiliser subject to VAT at the preferential rate of 5 per cent.
— Viet Nam News

Cashew nut exports increase, but processors face shortage of raw materials
Việt Nam exported 141,000 tonnes of cashew nuts for a value of U$$1.39 billion in the first five months of the year, a year-on-year increase of 21.4 per cent and 25.3 per cent, respectively, according to the Việt Nam Cashew Association.
— Viet Nam News

Vietnam internet suffers from cable breakdown
The Asia America Gateway (AAG) undersea cable suffered a breakdown, cutting off all international connections through the AAG-SH1 branch of the line on Saturday.
— Khmer Times

HCM City to host smart-tourism TPO Forum
As many as 130 delegates from six countries will share experiences about smart tourism at the 8th Tourism Promotion Organisation for Asia Pacific Cities (TPO) Forum from June 21-22 in HCM City.
— Viet Nam News

NA passes resolution on State capital control in SOEs
The National Assembly (NA) has approved a resolution on improving and enhancing the implementation of policies in using State capital and assets in State-owned enterprises (SOEs) as well as the equitisation of those firms.
— Bizhub

Huge number of bank cards unused
Fifty million of the 132 million bank cards issued in the country are not in use, causing an enormous waste of resources, the Vietnam Bank Card Association has said.
— VietnamPlus

Sticky rice sees price reduction
The prices of Vietnam’s sticky rice are facing a downward trend due to its over-supply and dependence on a single large market, according to the Department of Farm Produce Processing and Market Development under the Ministry of Agriculture and Rural Development (MARD).
— VietnamPlus

​Lack of capital hampers upgrades for deteriorating runways at Vietnam’s major airports
Even though two of Vietnam’s biggest airports each has a deteriorating runway that urgently needs to be repaired and upgraded, a lack of funding has prevented any works from getting started, the agency overseeing the country’s airdromes said in a recent report.
— Tuoi Tre

Group fears gov’t rice policy to breed smuggling
An industry group has expressed its apprehension towards the government’s new rice importation policy after some 100,000 sacks of rice were found smuggled at the Manila International Container Port.
— Inquirer.net

Why some places in Vietnam have become leading haunts
Vietnam has emerged as a major tourist destination in the world in the last decade, getting rave reviews from visitors and prestigious international travel publications.
— VnExpress

As Soccer World Cup Kicks Off, Vietnam Legalises Sports Betting
While Thailand’s authorities are eagerly trying to curb any illegal betting during the World Cup 2018 and police are even busy to arrest more than 1,000 women for using their social media profiles to promote soccer betting, Vietnam goes the other way and uses the opportunity of the soccer event to legalise and regulate the industry.
— Investvine

Vietnam: reconciling the diaspora
In 2018, Vietnam and Australia marked the 45th anniversary of bilateral diplomatic relations by upgrading their ties to a strategic partnership.
— Lowy Institute