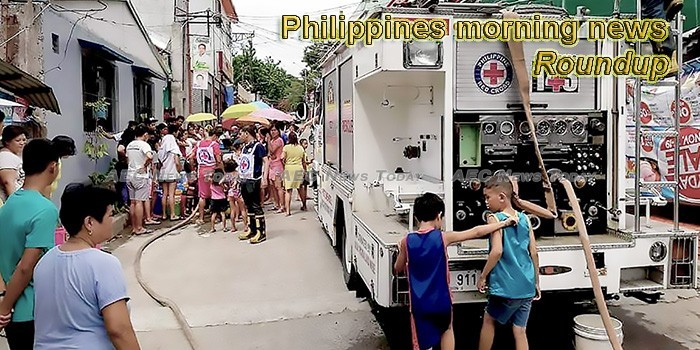 China could seize gas in Reed Bank if PH can’t pay loans – Carpio
The Philippines should be wary about the Chico River Pump Irrigation Loan Agreement because it could potentially allow China to take the gas-rich Reed Bank (Recto Bank) in the West Philippine Sea if it is unable to pay the $62-million loan, Supreme Court Senior Associate Justice Antonio Carpio warned.
— Inquirer.net

Govt subsidies to GOCCs in Jan decrease by 13.77%
THE subsidy given in January by the national government to companies it owns or controls was lower by 13.77 percent compared to the subsidies disbursed in January last year.
— Business Mirror

Pagasa: 51 provinces to suffer drought
THE STATE weather bureau expects 51 provinces to experience drought by the end of April, as the country suffers from the effects of the El Niño phenomenon.
— The Manila Times

PHL ‘out of the woods’ with inflation
THE PHILIPPINES appears “out of the woods” as far as inflation is concerned, with the overall rise in prices of basic goods seen consistently lower until the last few months of 2019, a senior central bank official said, although rising oil prices and the impact of severe weather may be disruptive.
— BusinessWorld Online

Philippines hails fall of last ISIS territory
The Philippines joined the world in celebrating the fall of the last remaining territory held by the terrorist Islamic State (ISIS) in Syria, even as it said the fight “is not over.”
— Rappler

Cloud seeding in Davao del Sur starts this week; province now under state of calamity
THE DAVAO del Sur government has placed the province under a state of calamity due to the dry spell brought that has caused an estimated P161.2 million in damage to rice and corn farms.
— BusinessWorld Online

Philippine’s new law on motorbike erupt riders’ protest
More than 10,000 motorcycle riders staged a motorcade on Sunday in the main highways of the Philippine capital Manila to protest at new regulations forcing them to display bigger licence plates, saying the measure would not solve the problem.
— Devdiscourse

DOLE, 3M partnership seeks to ensure healthy, productive workforce
The Department of Labor and Employment (DOLE) has partnered with 3M Philippines, a global science company, to promote occupational safety and health (OSH) and to further ensure a healthy and productive workforce in the country.
— Manila Bulletin

PH, Japan sign MOC to protect OFWs
The governments of the Philippines and Japan on Tuesday signed a Memorandum of Cooperation (MOC), providing better protection for Filipino workers to be hired under a new specified skills residency in Japan.
— Manila Bulletin

DICT to start mass building of cell towers
The Department of Information and Communications Technology is ready for the construction of common towers in the country.
— Manilastandard.net

Manila eyes more opportunities to link up with Belt and Road
THE PHILIPPINES is gearing up to secure additional funding support from China for local infrastructure projects, with the two economies enjoying deeper investment ties amid growing “mutual trust.”
— BusinessWorld Online

Firms urged to prepare for Telecommuting Act
Globe Telecom is urging enterprises to prepare for a mobile workforce in order to remain competitive in line with the Telecommuting Act which allows employees in the private sector to work from an alternative workplace using information and communication technology (ICT) tools.
— The Philippine Star

BIR reminds candidates to pay tax obligations
The Bureau of Internal Revenue is reminding all political candidates, political parties and party list groups, and campaign contributors to the May 2019 midterm elections of their tax obligations relative to the political exercise.
— Philippine Information Agency

DILG committed to realizing federalism
The Department of the Interior and Local Government (DILG) assured that its commitment to help bring about a federal form of government remains firm and it is now working with other government agencies to finalize the Bayanihan Federalism model developed by the Consultative Committee to Review the 1987 Constitution.
— Philippine News Agency

Meralco, partners to build P1-B facility for New Clark City
Manila Electric Co. (Meralco) and its partners plan to spend around P1 billion to build the facilities for power distribution services in New Clark City in Tarlac.
— The Philippine Star

BSP likely to cut rates by May
THE Bangko Sentral ng Pilipinas (BSP) will likely reduce key interest rates by May, noting that policy makers are likely growing more confident after inflation forecasts were slashed anew on Thursday.
— BusinessWorld Online

Senate bets demand swift end to water interruptions
With numerous Metro Manila and Rizal households suffering from the daily water service interruptions, Senate candidates in the May 2019 elections laid out their solutions for the current water crisis.
— GMA News

Summer is officially here: PAGASA says El Niño may run until August
THE Philippine Atmospheric, Geophysical and Astronomical Services Administration (PAGASA) declared the official start of the dry season on Friday, saying that the El Niño phenomenon may last until August.
— BusinessWorld Online

Comelec asks DoH to remove ‘Malasakit’ posters bearing Bong Go’s face, name
The Commission on Elections has asked the Department of Health to remove “Malasakit Center” posters which usually bear the name and face of administration senatorial candidate Bong Go in government hospitals in view of the prevailing ban on propaganda materials being placed in government-owned and -controlled establishments.
— Tempo

Will senators vote to send children to jail?
We entered the so-called Bahay Pagasa, “House of Hope.” It turned out to be a children’s jail.
— The Manila Times

FOI website data leak? Privacy commission investigating
The government and the National Privacy Commission (NPC) are looking into an issue with the country’s freedom of information request website, foi.gov,ph , as some data submitted by users to the site appears to be getting indexed on search engines.
— Rappler

Up to 50 bps rate cut seen this year
Economists expect at least two rate cuts as well as a further reduction in the level of deposits banks are required to keep with the Bangko Sentral ng Pilipinas (BSP) this year.
— The Philippine Star

ADVISORY: Select BPI services won’t be available April 5-7
The Bank of the Philippine Islands announced on Friday, March 22, that some of its services will be temporarily unavailable on the first weekend of April as the bank undergoes “a major systems upgrade.”
— Rappler

Despite honesty system hitch, bus firm still willing to go ‘conductorless’
After ending its honesty system because a number of passengers who did not pay their fare, Green Frog Hybrid Bus Company told Rappler that it would still give the conductorless system another try.
— Rappler