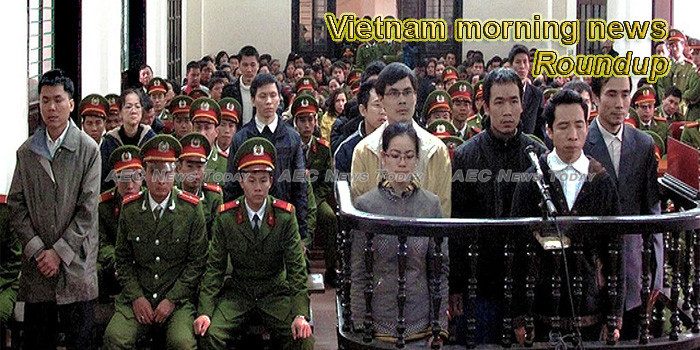 Vietnam rice prices dip as Chinese norms bite
Rice export prices fell for the fourth consecutive week in Vietnam on concerns of lower intake from China due to stricter norms in Beijing, while subdued demand weighed on the Indian and Thai markets.
— Bangkok Post

ADB’s $188m project to upgrade roads in northwest region
Some 198km of roads in the northwestern mountainous region will be upgraded under a project costing US$188 million, borrowed from the Asian Development Bank (ADB).
— Viet Nam News

Viet Nam’s GDP could grow more than 6.9% in 2019-20: NCIF
Viá»‡t Nam’s economy could grow between 6.9 and 7.1 per cent in the 2019-20 period under stable macroeconomic conditions that could boost foreign direct investment (FDI) and promote economic restructuring and the implementation of free trade agreements (FTAs).
— Viet Nam News

Hanoi attempts to trim 10% public servants by 2021
Hanoi’s determination of curtailing state employees is among missions to curb state budget deficit which the whole country is striving for.
— Viet Nam Net

Vietcombank no longer major shareholder in other banks
The Joint Stock Commercial Bank for Foreign Trade of Vietnam (Vietcombank) has officially completed a plan to reduce its holding ratio at other credit institutions to below 5 percent as required by the central bank.
— VNA NET

Property tax reduces household incomes and expenditures
Property has been suffering a variety of taxes in the process of formation, meaning applying an annual tax on property is unreasonable and distorting the taxation principle.
— Viet Nam News

Vietnam, US mark 30 years of MIA search cooperation
A ceremony was held in Hanoi on December 12 to mark the 30th anniversary of bilateral cooperation in searching for US soldiers missing in action (MIA) in the war in Vietnam.
— Viet Nam Net

Ride hailing platform Be makes debut
Be – a new player in Viá»‡t Nam’s ride hailing market that made its debut on Thurday morning – aims to have 6.6 million downloads and 105 million rides in the first year of operation.
— Viet Nam News

Vietnamese cannabis gang jailed in the UK
Sixteen Vietnamese nationals who made hundreds of thousands of British pounds (billions of Dong) growing illegal drugs in the United Kingdom have been jailed for more than 35 years.
— Viet Nam News

Trump Administration Hopes Vietnam Will Take More Deportees
Conversations between the U.S. government and Vietnam have immigration advocates concerned about the fate of thousands of Vietnamese immigrants, many of whom arrived in the U.S. as refugees.
— Huffington Post

Erosion and landslide ravage Son Tra Island
Son Tra Island and some other beaches in Danang City have continued to face serious erosions and landslides after the heavy rains over the past few days.
— Viet Nam Net

Programme motivates reading culture among pupils
A reading festival has recently been held in Hoc Mon district, Ho Chi Minh City. It is a kick-start for a series of similar programmes in other suburban districts under the goal of encouraging the reading habits of local students.
— Vietnam+

Social housing meets 28 percent of workers’ demand
Vietnam has to date completed 87 social housing projects with some 28,800 apartments for workers at industrial parks (IPs), meeting just 28 percent of the demand, according to the Ministry of Construction.
— VNA NET

Dozens of Vietnam armed forces generals punished in 2018
The disciplined figures include incumbent and former officers even their violations happened years ago.
— Hanoi Times

Thanh Hoa police hunt for man accused of overthrow attempt
Police of the central province of Thanh Hoa has issued a wanted notice for a 27-year-old man accused of “attempting to overthrow the people’s administration”.
— VNA NET

Zero landfill is the key to a green economy
Some corporations in Vietnam have committed to reuse and recycle 100 percent of their waste to improve environmental quality.
— Viet Nam Net