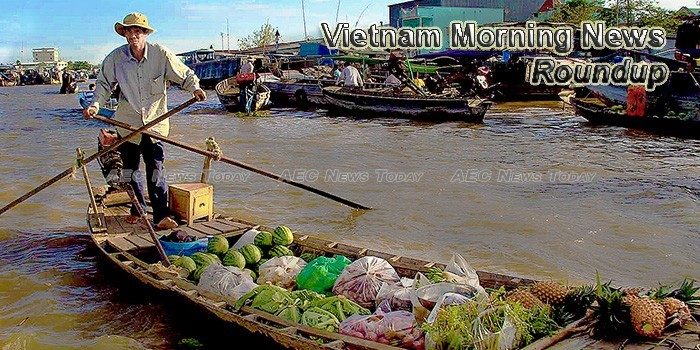 Vietnam to cut corporate tax to 15-17% in bid to boost business climate
Vietnam is planning to slash corporate income tax rates from the current 20-22% to 15-17% in an effort to make the country one of the most competitive economies in ASEAN, Prime Minister Nguyen Xuan Phuc has revealed.
— VietnamNet Bridge

Vietnamese coal in a tight spot
Coal is imported more and more, due to some coal thermal power plants are putting into operation and imported coal is cheaper.
— VietnamNet Bridge

US won’t easily break Russia’s hold on Vietnam
As Russia’s relations deteriorate with the West, Vietnam will find it increasingly difficult to balance its diversified strategic ties.
— Asia Times

Vietnam’s TPBank expects market cap to soar to $1b after listing
Tien Phong Commercial Joint Stock Bank expects its market capitalization to rise to least $1 billion in the fourth quarter after the scheduled listing this month, according to Chairman Do Minh Phu.
— DealStreetAsia

Vietnamese dragon fruit set for a 12-month season
Dragon fruit from southern Vietnam will be running full steam ahead for a full year-long season this year.
— Fresh Plaza

Foreigners keen on investing in Vietnam
A total of 1,285 deals were made by foreign investors to contribute capital to and buy shares of Vietnamese businesses with total capital of 1.89 billion USD in the first quarter of this year, up 121.6 percent against the same period last year.
— VietnamPlus

Australia promotes trade interests in Vietnam
Assistant minister for trade, tourism and investment Mark Coulton is on an offical trip to Vietnam to promote Australian economic and trade interests.
— Manmonthly

Coffee export volumes jump, value falls in Q1
Viet Nam exported 520,000 tonnes of coffee worth US$1 billion in the first quarter of the year, an increase of 15.1 per cent in volume but a decrease of 1.7 per cent in value compared to the same period last year, according to the Ministry of Agriculture and Rural Development.
— Bizhub

Amata licenced for $1.6b project
Amata VN Public Company Limited, a subsidiary of Thailand-based Amata Corporation PCL, has received a licence to develop the first phase of the US$1.6 billion industrial and urban project in the northern province of Quảng Ninh, around 150 km from the capital Hà Nội.
— Viet Nam News