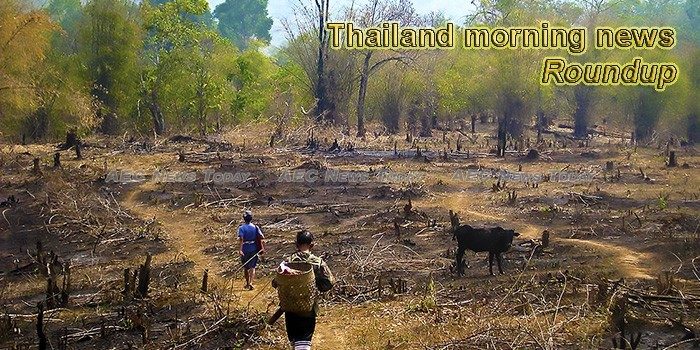 Private sector raises GDP growth forecast in Q4 to 4.4%
The Joint Standing Committee on Commerce, Industry and Banking has adjusted the Thai GDP growth forecast to higher than 4.4% for the remaining three months of this year due to the export sector’s growth as well as the government’s budget disbursement.
— NNT

Thai economy insulated from global volatility despite rate hikes, trade war
THAILAND’S economy and banks should be able to weather heightening global risks from rising US interest rates, although escalating trade wars could pressure global growth next year, according to sovereign and banking analysts at Fitch Ratings’ annual Thai conference in Bangkok yesterday.
— The Nation

Cabinet ministers are entitled to join new political party, says Prayut
PRIME MINISTER Prayut Chan-o-cha yesterday defended the right of four of his ministers to join the pro-junta Palang Pracharath Party, saying it was a “private matter” and they were able to do so as long as it did not affect their ability to do their public duty.
— The Nation

One dead in ‘Phoenix’ salvage operation
It has been confirmed today that one person died on Saturday during the operation to salvage the ‘Phoenix’ tour boat which sank on July 5 killing 47 Chinese tourists.
— The Phuket News

Activists give thumbs up to tobacco tax move
PRIME MINISTER Prayut Chan-o-cha yesterday said that a plan to collect an extra Bt2 from every cigarette packet sold was in the process of consideration, even as anti-smoking and health advocates backed the idea of the additional money being used to fund the universal healthcare scheme.
— The Nation

New Report Details Abuses against Thai Environmental Defenders
Thai authorities and a mining firm have used intimidation and lawsuits to target environmental activists from a northeastern community who campaigned for years against a gold mine near their homes, the NGO Fortify Rights said in a new report released Tuesday.
— Benar News

Joint efforts being made to tackle flooding caused by rail construction
As the construction of the Red Line electric train system along Vibhavadi Rangsit Road has obstructed the drainage of floodwaters, the Bangkok Metropolitan Administration (BMA) and related units are joining forces to find solutions.
— NNT

Mekong communities urged to organise emergency plans
A COMMUNITIES-LED emergency response plan is being advocated to cope with water hazards and dam disasters on the entire Mekong River Basin, as climate change magnifies the threats of water disasters posed by dams.
–The Nation

30 Thais evacuated from Palu, Indonesia with 2 choosing to remain
The Thai Ambassador to Indonesia has led emissaries from the Thai armed forces to retrieve Thai citizens stranded in the Indonesian city of Palu following a devastating earthquake and tsunami disaster with 30 agreeing to return home and two deciding to remain.
— News Today (video)

The future is in senior care and living units, says THG after successful
SENIOR CARE and living services will increase the cash flow for the Thonburi Healthcare Group or THG in December and the first quarter of next year, said Tanatip Suppradit, its vice president.
— The Nation

“Internet Universality Beyond Words” exhibition promoting internet access
On the occasion of the international Day for Universal Access to Information on 28 September every year, UNESCO joins hand with Thailand to promote universal access to the internet because it is a vital tool to drive forward the creative economy in Southeast Asia.
— NBT World (video)

Cybersecurity threats keep growing even as spending rises
According to Frost & Sullivan, IDC, and Gartner, in 2017 Thailand spent Bt6.71 billion on cybersecurity. This is expected to grow to Bt16.2 billion in 2025, or 0.07 per cent of GDP.
— The Nation

BoT tamps down on mortgage lending
The Bank of Thailand has set out measures to rein in mortgage lending after it found widespread search-for-yield behaviour in the residential market, with some banks extending housing loans exceeding the central bank’s guidance.
— Bangkok Post

Cabinet approves amendment to Criminal Procedure Act to ease prison overcrowding
The cabinet on Tuesday (Oct 2) approved an amendment to the Criminal Procedure Act, allowing those charged with offences punishable by less than 10 years imprisonment to get a temporary release without having to post bail in a bid to ease overcrowding in Thai prisons.
— NNT

Gold mine should cough up, say locals
About 200 residents who have been badly affected by the construction of a gold mine in Loei province’s Wang Saphung district for more than a decade are calling for the mining company and government agencies to restore the environment and pay compensation to villagers.
— Bangkok Post

PM calls on all sides to avoid damaging Thai tourism’s image
Prime Minister Prayut Chan-o-cha has urged government officers and the general public to be careful that they don’t damage the country’s tourism image and confirmed that the number of tourists is still stable.
— NNT

40 stunning free photos of Thailand
Using great pictures is critical for marketing collateral to display a professional and appealing message to potential customers. These 40 free, high-definition stock pictures of Thailand will be a great help for you to design websites and brochures, especially for businesses in tourism and travel, real estate, food, luxury…
— ASEANUP