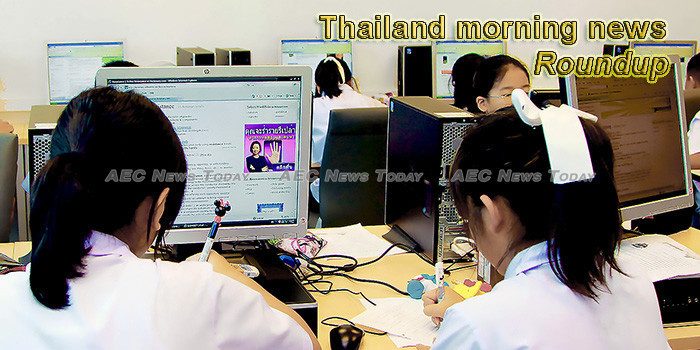 Consumer confidence drops in Sept
The Center for Economic and Business Forecasting has remarked that the U.S.-China trade war and the lower number of Chinese tourists were negative psychological factors that affected consumer confidence in September.
— NNT

Pheu Thai won’t join political discussions if invited by NCPO
The Pheu Thai Party will opt out of discussions on lifting of political restrictions between political parties and the Election Commission if the invitation comes from the National Council for Peace and Order (NCPO).
— The PBS World

The ‘war on drugs’ is a complete failure
The demand for both crystal meth and ‘yaba’ is escalating as is the production to meet the increasing demand.
— The Thaiger

Watertight electric car can ‘swim’ through floods
The tiny, pink car crawled down a ramp before an expectant crowd, then slid silently into the makeshift swimming pool.
— The Straits Times

Tourism package ready
A series of tourism stimulus measures, including visa fee waivers for citizens of some countries and improved safety and security rules, is about to go before the cabinet as the industry looks for a boost in the last two months of the year.
— Bangkok Post

Panthongtae pleads not guilty
FORMER PM Thaksin Shinawatra’s son Panthongtae pleaded not guilty when he showed up in court yesterday to fight a money-laundering case related to a controversial Krungthai Bank loan.
— The Nation (annoying popups)

UOB Asset Management Thailand is setting the standard by prioritising sustainability
Thailand has quickly progressed from a low-income country to an upper-income one, with citizens experiencing declining poverty, increasing levels of educational attainment and rapid economic growth over the past few decades.
— World Finance

Cash rewards offered to save sea turtles
NATIONAL PARKS on the Andaman coast are offering cash rewards to those who discover sea turtle nests and notify park officers in an attempt to protect the endangered species from extinction.
— The Nation

Concerns over facial recognition AI
THE ARRIVAL of artificial intelligence facial recognition technology across Asean countries, including Thailand, has raised concerns among businesses and consumers over individual privacy.
— The Nation

Thailand a magnet for firms fleeing trade war – but who benefits?
The tariff war between the US and China is hurting not only both superpowers, but also their trading partners, including Thailand.
— The Nation

Prisons to ban sale of tobacco products and cigarettes
A NEW REGULATION will ban the sale of cigarettes and tobacco at all prisons across the country to reduce the number of inmates falling sick or dying from respiratory diseases, Corrections Department director-general |Pol Colonel Narat Savettanan said.
— The Nation (annoying popups)

BTS Samrong-Samut Prakan line to open next month
The 13km extension of the BTS elevated railway linking southern Bangkok with Samut Prakan will open next month, and travel on that stretch will be free for the first four months, Prime Minister Prayut Chan-o-cha said on Monday.
— Bangkok Post (annoying pops)

Rising abuse of elderly irks NHRC
With abuse and neglect of the elderly tipped to increase as the country moves toward an ageing society, the National Human Rights Commission (NHRC) is taking a lead in calling for strong policies to address these concerns.
— Bangkok Post

Radiation law delays at NLA irk dentists
The Dental Council is threatening to renew moves against the new Radiation and Nuclear Regulation Act, saying draft amendments to the law have not been deliberated by the National Legislative Assembly since the draft was approved by the cabinet five months ago.
— Bangkok Post

State enterprises drive economy
State enterprises invested 310 billion baht in the first nine months of this year, up 45% year-on-year, and were the main force driving the economy, according to the State Enterprise Policy Office (Sepo).
— Bangkok Post

Number of men joining army voluntarily rises
The Ministry of Defense has revealed that the number of men who volunteer to serve in the army has increased continuously since 2015.
— NNT

Effective integration of digital technology and farming
In today’s dawning Internet of Things (IoT) era, with so much online and lifestyle aspirations only a click away, disruptive technologies are catalysts for business people to adopt in order to ride the wave of change.
— Bangkok Post

Greener car cleaning? There’s an app for that
The premium carwash provider Instawash might have started life in Korea but the co-founders of the Thai business believe Thailand is ready for an app-based service that will clean your car anywhere at any time.
— Bangkok Post

Strategic deal with China close to reality
Thailand is enthusiastic about signing a strategic partnership with China to enhance economic cooperation between the two countries.
— Bangkok Post