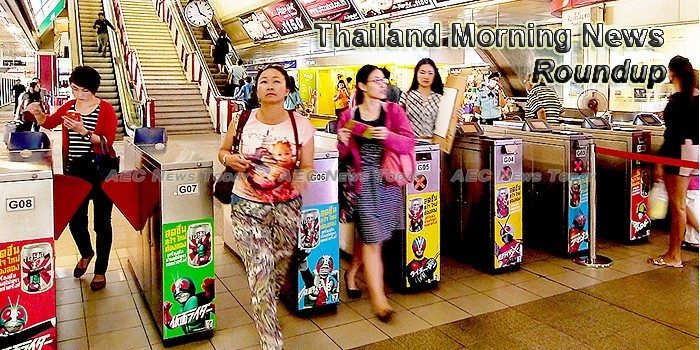 Thailand Smashes Ugandan Human Trafficking Operation (HD video)
Thai authorities have broken what they believe to be a major transnational human trafficking operation responsible for the trafficking of hundreds of Ugandan women into Thailand and on to other parts of Asean.
— AEC News Today (video)

Thai court rules AirBnB against the law in Thailand for daily and weekly rentals, Banned!
A court in Thailand has deemed AirBnB to be against Thai law and in effect banned with serious fines and possible jail time for anyone who offers rooms for daily and weekly rental as well as potential tenants. Monthly rentals and long term leases were deemed legal.
— The Pattaya News

Cabinet gives the nod to marijuana for medical use
A DRAFT LAW, which allows marijuana use for medical purposes, has sailed through the Cabinet.
— The Nation (annoying popups)

Government rice stocks near depletion
Thailand’s Department of Foreign Trade (DFT) has announced that over 14.8 million tons of the more than 18 million tons of rice in government stocks, acquired through pledging since May of 2014, has been released to market and the stocks are likely to be depleted by next month.
— NNT

Farm chemicals ‘pose a threat to public health’
ACADEMICS urged the government to prioritise the protection of people’s health from the threat of chemical contamination and ensure a healthy environment in keeping with the county’s pledge to pursue Sustainable Development Goals (SDGs).
— The Nation (annoying popups)

Police reject request to hold activity commemorating 2010 crackdown
The Bangkok police have asked a pro-democracy activist to seek permission from the junta before he could host a symbolic activity to commemorate the 2010 crackdown on the redshirts.
— Prachatai English

Doubts over ‘graft-busting’ charter
VETERAN POLITICIANS say they are not convinced the Constitution can live up to its drafters’ claim of suppressing corruption.
— The Nation (annoying popups)

Panel formed to handle land conflicts
The Bureaucratic Reform Committee has set up a subcommittee to consider solutions to the complaints made by the P-Move group. The committee confirmed that the government will address all of the group’s issues.
— NNT

Better migration systems and policies can propel Thailand to grow faster
Thailand can strengthen its migration policies and systems to support sustained, innovation-driven growth, under its Thailand 4.0 strategy, experts concluded at a presentation of the recent World Bank report, Migrating to Opportunity: Overcoming Barriers to Labor Mobility in Southeast Asia today in Bangkok.
— Devdiscourse

Cabinet earmarks budget for 3 biomass power plants in Deep South
The Cabinet has set aside a budget of over one billion baht for biomass power plant projects in the three southern border provinces, hoping to foster energy security and create jobs for locals.
— NNT

THAI bets big on maintenance hub
A PLAN by Thai Airways International (THAI) for a showpiece aircraft maintenance centre in the Eastern Economic Corridor (EEC) – intended to cement the country’s status as a regional aviation hub – is edging closer to reality, with a feasibility study due to be completed this month.
— The Nation

Magic Skin couple bought 30 cars worth B68m
Police are looking to seize 30 vehicles, including high-end performance cars, worth about 68 million baht bought by the couple who ran Magic Skin, a firm found to have marketed substandard cosmetics and weight loss products.
— Bangkok Post

Four years after coup, Thais tire of corruption and democratic delays
When Thailand’s army took power in a bloodless coup four years ago, it promised to bring happiness back to the “Land of Smiles” and return the country to democratic rule within two years.
— Reuters